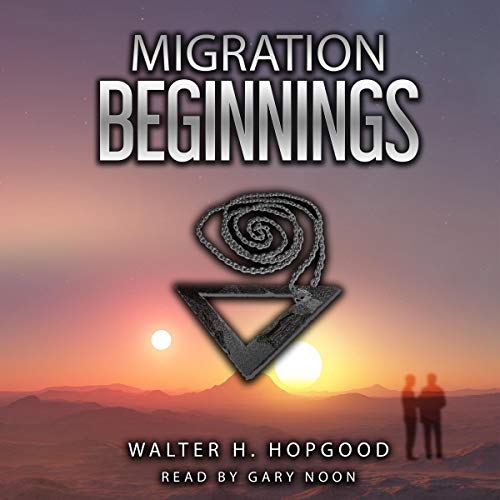 By: Walter Hopgood
Narrated by: Gary Noon
Try for $0.00

Bombings in Europe leave the whole world in chaos. But amidst that chaos is an old family riddle that could lead Earth's population not just to a better place, but maybe to another planet.

Migration: Beginnings is the story of newlyweds Rhys and Jason, and how a necklace and accompanying story handed down through the generations in Jason's family has the chance of bringing hope to a chaotic world.

If only their search for the long-hidden device wasn't being sabotaged at every turn by a madman, who will stop at nothing until he gets his hands on it, so he can control the world.

It's a race against time for Rhys and Jason to solve the riddle, and bring hope to a population that's lost so much, it's all they have left.

What listeners say about Migration: Beginnings

It's a treasure hunt set in a catastrophic world event; a fun race around the world to find all the pieces of a machine that can help humanity during the aftermath of a terrorist nuclear attacks. The ending was amazing. Without giving anything away, I think this will appeal to action adventure as well as sci-fi fans. Great start to a new series.

Migration, Beginnings .
I received a free copy of this audio book at my own request and voluntarily leave this honest review.
Well I would describe this book as a slow burn, and I think it's the basis for an explosive sci-fi series.
Jason and Reese are a gay couple who are thrust into an adventure to find a "Stargate ".
A very enjoyable read/listen. No graphic violence or bad language in the book and no sex . A good clean read.
Narration is excellent.
I look forward to reading the next book in the series.

First of, this book is a gay and lesbian adventure fiction. The main characters are set on an adventure to find the missing devices that are hidden around the world.
This book does have some great things in it but I didn't like the characters as much. I like my characters to be complex and where there are grey areas when it comes to people who are good and bad.
This book was not for me but others might like it.

If this seat were a man, I'd totally consider ...

... dating him. "
Great cover art.
This should have been a great thriller, too. With atomic bombs exploding in Europe and coordinated terrorist attacked at airports throughout the east, the search is on for two artifacts - one had already been found - which, combined could solve the world's overpopulation problems. The key to it all seems to lie in a centuries old legend within the family of one half of a newly married couple and the amulet still worn. Reece and Jason might be an appealing couple of only the author would accept that the reader had understood that they were not just parteners, but married to their husband. Husband. Husband. Really, it became the key word for the book. Together with some idiotic phrases like, 'followed Jason into slumber', 'dark thoughts tinged with darkness', 'nobody would be forthcoming', 'where the others congregated' (both of them!), and similar. Added to the father strange idea that, with atomic bombs exploded, a billion people dead from the initial impact alone, and half the world on the move in search of safe haven, the couple (sorry, married couple, two husbands) don't even mention societal problems - um, yes, some people somewhere might be sufficiently shallow not to notice the slight world disruption, but - oh, I cannot sufficiently express my disappointment with this non thrilling thriller.
Please give this to a decent editor and actually write in some thrills: shou!d be easy enough, the ideas are tucked in there somewhere. Oh, yes, the narrator was fjne. It is his performance that boosted this tale of two husbands to three stars.

My thanks to the rights holder of Migration, Beginnings, who, at my request, freely gifted me with a complimentary copy via Audiobook Boom. Much was expected, little received. But it is an excellent cover.