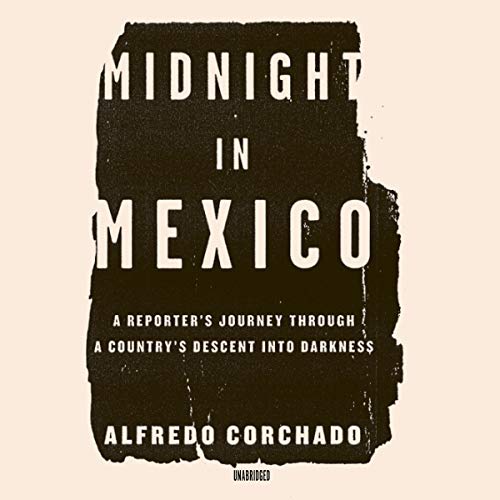 By: Alfredo Corchado
Narrated by: Timothy Andres Pabon
Try for $0.00

A crusading Mexican American journalist searches for justice and hope in an increasingly violent Mexico.

In the last decade, more than 100,000 people have been killed or disappeared in the Mexican drug war, and drug trafficking there is a multibillion-dollar business. In a country where the powerful are rarely scrutinized, noted Mexican American journalist Alfredo Corchado refuses to shrink from reporting on government corruption, murders in Juarez, or the ruthless drug cartels of Mexico. One night, Corchado received a tip that he could be the next target of the Zetas, a violent paramilitary group - and that he had 24 hours to find out if the threat was true.

Midnight in Mexico is the story of one man's quest to report the truth of his country - as he races to save his own life.

What listeners say about Midnight in Mexico

I had the pleasure of attending a reading Mr. Corchado did a few years ago at a local community college. Fascinated by his story, I devoured this book. Listening to this book added a new dimension of understanding to the unrest in Mexico and Central America today. Thank you for releasing this great work in audio format! Bravo!

I thought this book was going to be a deep dive into the 100,000+ people who’ve gone missing in Mexico and the mass graves being found across the country. This book was not about that.. more about one journalist’s story and combination of personal experiences. It was ok because I love Mexico and have an interest in the people and their struggles but it wasn’t great.

I quit midway through the book. The premise had me intrigued. It just never got there for me.


Pabon was the wrong narrator for this. Too soft.

Book was hard to follow in a little bit of a let down. Not very many stories that were specific to the cartels.

Overall its a good listen. Heavy on cultural description and light on actual narco action

I found this book to be unnecessarily long. The narrator is great with both English and Spanish languages. The ending was a little strange and tragic. It didn’t seem to allow for it to process before the end. I would move it up to the beginning.

Author was very informative. It was nice to hear a reporter/Mexican American w family in Mexico’s version instead of the typical law enforcement story.

Alfredo Corchado is a good writer. He has the ability to paint a vivid picture, especially of the inner workings of some people’s mindset, experiences, etc. However that doesn’t make his book any more compelling.

I was expecting this book to be about one journalist’s journey throughout the cartels of Mexico and all the major events he’s been a witness to. But, it’s just about the various interviews he’s done. It’s also a book about how he longs for the Mexico of his dreams.

Regardless of all that, it really is not an interesting listen. At least, not to me.

One annoying thing he did was pad the word count with various things in Spanish and then immediately translating them. But it isn’t like he did it all the time; mostly when something dangerous was happening or whatever.

In addition, the narrator, Timothy Andres Pabon, doesn’t seem to have the right voice for this story. For some reason, he sounded as if he was hesitant telling the story. I don’t know how to describe it. But it just didn’t seem like the right fit.

To sum it up: not the worst nonfiction I have listened to, but it’s far and away from the best.

I had to give up and skip ahead after a lot of chapters. Really, I couldn't quite get into the story.
The book is a highly flowery, discriptive, and extensive take on the authors personal life. One sees his Mexican hometown and family etc though many chapters. In a secondary position is the background of conflict and Mexican society. That society is corrupt, and almost a failed state. The author in any event, is very good. I'd like to read more from him.

this book leaves you with a feeling of despair, a country, a culture dying a slow death. yes some people care but will it be enough ? i watched narcos, which pretty much tells the same story of ruin of Mexico, i am sure there are many more Mexicans with a similar story to tell, some might have most more than the author.