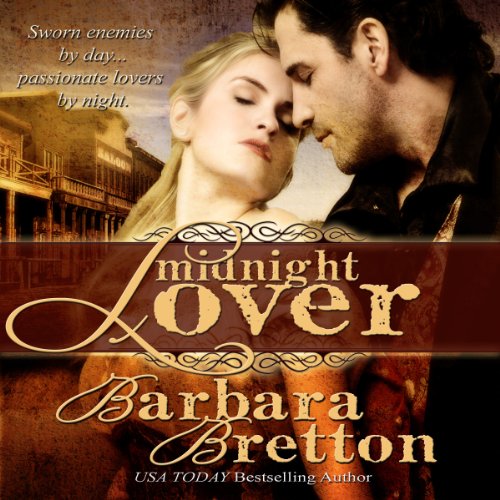 By: Barbara Bretton
Narrated by: Braden Wright
Try for $0.00

They were sworn enemies by day - and passionate lovers by night.

The cowboy moved so quickly Caroline didn't have time to think, much less react. One moment he was standing there looking at her across the blazing hot Nevada street, the next moment, she was in his arms.

Her protests were stopped as he bent his head toward her. A complete stranger, a cowboy she'd met just moments ago when she stepped off the dusty stagecoach was actually going to put his mouth on hers and kiss her. Things like this never happened in Boston!

Just before she thought she would certainly swoon from the heat and the breathlessness and the shocking thrill of anticipation, the sound of gunshots pierced the fog she was in and a bullet whizzed past her left ear.

The cowboy swooped her up into his arms then dropped to the ground and rolled with her under the stagecoach. Her heavy skirts rode up over her thighs and she struggled to pull them down before he got a glimpse of her lacy pantalettes but it was no use. He had her pinned with his body and the way they fit together was shameful. His chest was pressed so close to her that she was certain he could feel the outline of her breasts through her blue dress. His hip bones jutted against the slight soft curve of her stomach and she dared not imagine the cause of the powerful heat pressing against her belly.

He took full advantage of the situation and positioned himself between her legs and she hated herself for noticing just how handsome he really was. She'd never felt more vulnerable - or more alive - in her entire life.

What listeners say about Midnight Lover

frist time author, I wasn't to a sure after 2 chapters. decided to read 2 mote. then I was hooked. on to Barbara's next.

New author for me, the story is good. Caroline is a young woman who despite her fears, fights for what she believes in. I like that in a book. Jesse is quite a different story, he portrays himself to those around him as arrogant and cold, but we get peeks from the beginning that he is not without heart and is loyal to a fault. He falls hard for Caroline despite his fight against the attraction for the feisty young woman. What starts out as a business arrangement becomes so much more for both of them.
Ms. Wright, one of my fave narrators, did a splendid job telling the story. His voice for Jesse is sinful, loved it. Love all the voices he gave to the characters. I never have to think who speaks when because of the dinstinction he does so well.

I just could not care for any of the characters, they spend most of the time fighting and arguing and not enough time doing anything else. Literally, all the action and romance happened in the last two hours of the book.
Narrator done a great job and has a dreamy voice but even that couldn’t elevate this badly written book to higher rating.

I admit I was only able to make it to chapter 9. A lot of reviews stated this is not a silly western romance, but to me it is. Maybe I just wasn't in the mood for this kind of book the day I played it... I'll try to go back another day and re-listen to it. If my outlook changes I'll update my review.

3.5 Stars for this Western Teasing Romance

I found the relationship between Jesse Reardon and Caroline Bennett to be exciting. Jesse and Caroline had definite chemistry from the beginning. Yet, they were immediate enemies upon Caroline stepping into Jesse's town to stake a claim on her inheritance.

I really liked the heroine, Caroline, a beautiful, blue-eyed blonde who entered the wild west with her intelligence, sassy wits and perseverance to succeed in a man's world. Caroline began her adventure as she left Boston in search of a new way of life for herself. She sought to take the propriety of her deceased father's saloon, the Crazy Arrow, and later she found out about a mine he owned.

Jesse Reardon has a story of his own as he has made a name and reputation for himself as the most powerful man in Silver Spur which was marked as a single man's dream town with the whore houses and gaming saloons present. Jesse is a strong man dead set against marriage and the trapping of a conventional relationship with a woman. Caroline sparks his immediate interest because of her beauty, but also because she's the daughter of the Mr. Bennett, the man who lost his saloon and mine to him in a card game. Jesse immediately goes to battle with Caroline to discourage her and tries to make her leave the town before the judge can come to settle their legal disputes.

THINGS I LOVED ABOUT THE BOOK
1) I thought the chemistry between the leads was good. They had some good banter and it was cute how Caroline's high vocabulary that she used sarcastically against Jesse set him aback…I loved how she would spin him on his heels, at times, with her sassiness. He was such a flirt with her as well with all of his sexual innuendoes that he used to confuse her. Those parts were sweet (in their own kind of way).

2) When they finally start their love relationship, I loved how sweet Jesse was to Caroline. There are a lot of gestures of kindness and tenderness he extends to her.

3) I loved it when Jesse finally fell in love with Caroline. The bigger they are, the harder they fall..lol. Initially, he struggled so much internally, but I loved seeing how he gave her everything of himself and finally admitted to himself that he loved her fiercely.

THINGS THAT BOTHERED ME:
1) Maybe I'm the jealous type and this was more about me, but I hated the slow transition between Jesse's relationship from his lover Jade (owner of the whore house) and his commitment to Caroline. The transition couldn't happen soon enough for me. Usually I like books when the hero falls so hard for the heroine that he immediately stops sleeping with the "other girl." I hated hearing about his sex trysts with Jade. It put a bad taste in my mouth.

2) Even though this book is named Midnight Lover, I was so annoyed that the midnight love didn't start until close to 1/4 of the end of the book. What the????

3) I wish there was less coverage in this book of the antagonistic relationship between Jesse & Caroline and more of the part where they are hopelessly and passionately in love with one another. It felt as though they were enemies longer than they were lovers and that bothered me.

4) I was really upset that one of the good characters in this story died.

Overall, I suppose this book is somewhat of a tease. It's a tease because I really liked the characters and wished for more coverage in the book of their blissful and passionate love together. When it finally happened it was really good. The epilogue was also super sweet and endearing.

Narrator: I purchased this audiobook (since I was out of credits) because of the "swoon-worthy" voice and talent of narrator, Braden Wright. I wish he would narrate more historical, romance books because he is just fabulous and made this story worth listening to, despite my disappointments.