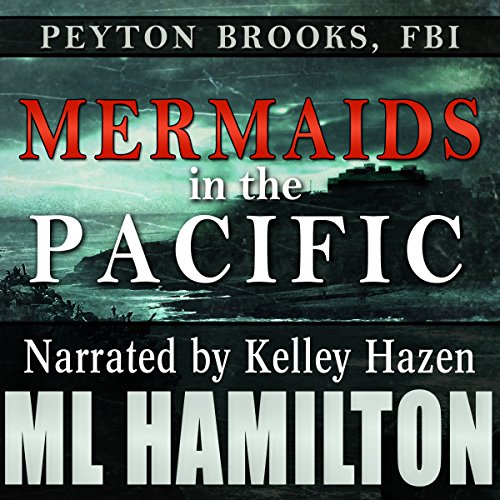 Mermaids in the Pacific

Peyton thought working for the FBI would bring new adventure and intrigue into her life. Certainly being assigned to the Ghost Squad promised such things, but reality is often different from the dream.

Everything is wrong. Her new boss, Radar, thinks she's angling for his job, her personal life is in shambles, and her once over-crowded house has become an empty shell where she and her dog, Pickles, wander about, longing for what was lost.

With Marco in a battle for his life, Peyton feels sidelined, until a mermaid is found floating off Natural Bridges State Beach. Beyond the media frenzy looms the very real possibility that Peyton and her team may be sucked into a standoff between the federal government and an elusive cult known only as Horizon. And Radar fears, there will be blood.

What listeners say about Mermaids in the Pacific

I was voluntarily provided this free review copy audiobook by the narrator and found it very entertaining. This is the second book in this series, I enjoyed it as much if not more than the first one. The characters just keep growing and enhance the story so much. I started in the middle of the series, so now I'm going to re-listen to book 3 and 4 so I get the full impact of the story. I'm looking forward to listening to more from this series.

WOW - this winds up being a really touching story

Another really weird case. I love how Hamilton is finding this way to take these supernatural ideas and make them FBI issues - I don't want to say to much as I don't want to ruin it for others - no spoiler alert here. Marcos got me worried. I don't know what they'd do without Abe. The new FBI team is really cool.This story has a lot of nail biting moments. And then one plot that is just so , I don't know, special. I teared up. I can't remember another audiobook doing that.

Mermaids in the Pacific

While Peyton’s personal life may be in shambles, she is certainly making her mark in the FBI. It’s another unusual case... the deformed body of an infant washes ashore. Could it actually be a mermaid?

Marco is struggling, but he needs to pull it together not just for himself, but also for his team as they deal with 2 big cases.

I have become so invested in these characters created by M.L. Hamilton. The more I listen, the more I want!

Kelley Hazen’s narration adds another layer to an already great story. I find myself so engrossed in what is going on that I just can’t put it down.

If you have been following the series so far, you would know that Marco and Peyton are struggling with the changes in their relationship. If you are new to the series, may I suggest starting from the beginning? It is absolutely fantastic and best appreciated and experienced in order.

Back to Marco and Peyton. After Marco's injury, he had been struggling with the pain and the changes in his lifestyle. Peyton, meanwhile, is still adjusting to her new job at the FBI and her new, quirky team. All this "newness" challenged the foundation of their relationship, leaving our two protagonists questioning themselves and who they are without the other. So this is perhaps the biggest change in the overall plot of the series. In all the previous books the two were working together or lovers. But for most of this book the two have been apart. However it isn't a bad thing. Both characters grow, heal and blossom in this book.

Of course this story is also a mystery or, really, several mysteries. ML Hamilton does a fantastic job with that part of the story as well. Piece by piece the cases that the FBI and the precinct are working on fall into place thanks to the grit and determination of both teams.

Kelley Hazen continues to deliver the Peyton Brooks series with aplomb. I thoroughly enjoyed this book and look forward to the next. I just hope Peyton and Marco are able to sort out their differences. They are both such strong characters but even stronger together.