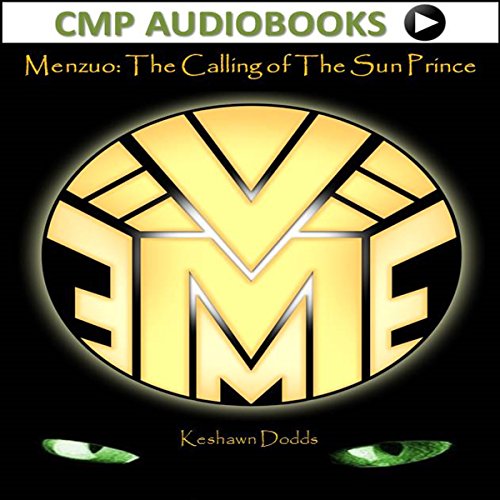 Menzuo: The Calling of the Sun Prince

By: Keshawn Dodds
Narrated by: Austin Freeman
Try for $0.00

Jammal Hall is just 11 years old when he finds out his life on Earth is more important than he could ever imagine. A week before his 12th birthday, which happens to be his age of destiny, many secrets are revealed to him - including the news that he's from another planet and his earthly parents are not his birth parents. Jammal, who is actually Prince Menzuo: Universal Protector, must rely on his guardian Solar if he is to survive combat training in order to prepare to face his arch nemesis: the deadly Pirate Warrior, Morbid.

As Prince Menzuo begins to understand just how important he is in protecting the planet and the power of All Good and Evil, he must also face the challenge of trying to live a normal life while participating in a virtual reality tournament with his best friends.

Will Menzuo be able to fulfill his destiny as protector, or will he give in to his fears and let the fate of the universe fall into the hands of the evil Morbid?

What listeners say about Menzuo: The Calling of the Sun Prince

This was a great book!

This was a great book! I usually can't stay focused long enough to finish books. but this one was good enough to keep my attention. Can't wait to reread with my 4 year old. He loves superheroes and I think he will really enjoy me reading this to him.

This was just a pure, fun, ear candy book. It's really more of a pre-teen book, I think, but even as an adult, I enjoyed it. It reminded me of watching anime.

An almost-12-year-old boy finds out he's actually a prince from another planet and must save the Earth from an evil pirate king -- while he maintains his appearance as a normal kid. It's pretty much the fantasy of every kid to find out he or she is secretly someone really important with special powers, so this plays right into that wish. It's predictable but fun.

The narrator was good and the audio was mostly good, though it sounded a little over-processed. Someone who's not an audio nerd probably wouldn't notice.

Menzuo: The Calling of the Sun Prince
Solar Warrior, Book 1
By: Keshawn Dodds
Narrated by: Austin Freeman
This is an audible book I requested and the review is voluntary.
This is a middle grade book about a baby boy left from outer space to grow up here to be Earth's protector. He grows up and develops super powers. It is a good kid's book but I doubt adults would enjoy it much. I am rating it based on what kids what I feel kids will feel. I found the premise nice, like a quiet Superman.
The narrator did a good job with the various voices and sounds.