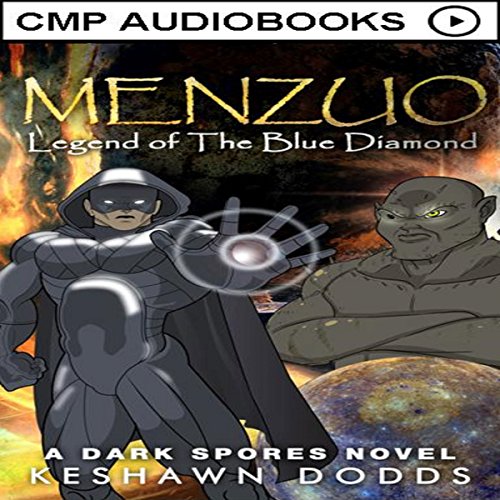 Menzuo: Legend of The Blue Diamond

By: Keshawn Dodds
Narrated by: D. Michael Hope
Try for $0.00

The follow-up book of the Menzuo is the first installment of the Superhero adventure novel in the Dark Spores series from acclaimed author Keshawn Dodds.

When young Jammal (a.k.a. Prince Menzuo) found out that he was adopted...and from another planet, his true destiny as the new Universal Protector was revealed. After saving the Earth from one very dangerous pirate warrior named Morbid, Menzuo is ready to continue his preparation to become the true Universal Protector.

As he trains with Solar by his side, under Master Renzfly’s watchful eye, a mysterious messenger from the outer realm interrupts his progress and begs for the prince’s help to save planet Bralose. Confident in his training and powers, Menzuo is surprised to find that he’s not prepared to battle Hydrosion - the one holding planet Bralose captive.

Just when the prince believes all is lost, the Solar Warriors lend a hand just in the nick of time. If he is to defeat the evil Hydration, Menzuo learns he will have to embark on a journey to find the legendary Blue Diamond - a feat no one has yet done successfully. It’s a race against all odds as the Universal Protector and his friends discover what they need to defeat the enemy before it’s too late.

What listeners say about Menzuo: Legend of The Blue Diamond

I recieved this book free of charge for an honest review. it's a good build up type story. bot a ton of action but enough your not to bored. a good time killer

Menzuo, a young boy, becomes an unlikely superhero! Will he, as destined, become the Universal Protector? Or will the obstacles and challenges in his way dissuade him? Will his training and powers be enough?

Great adventure, I loved listening to it!
Very nicely done, loved the writing and narration, really was a wild fun adventure. Young and old alike will enjoy it!

This was a great story full of action and interesting characters. A super hero tale, to be sure. The narration is fairly well done. There were some times where there wasn't enough tension is his voice during some of the action, but not so much as to be a detriment. All in all, this is a fun tale that most could enjoy.

We first meet Menzuo in "Menzuo: Calling of the Sun Prince". In that one, an 11-year-old boy finds out he's really a prince from another planet and has to save the Earth from an evil pirate king. Spoiler: he does.

After that battle, he gets to be a (mostly) normal kid for a few years, but as things do, evil returns. He needs to find the legendary blue diamond in order to battle it.

These books are really for a pre-teen audience, IMHO, but I enjoyed both of these stories, though I think I liked this one better. Though I'm an adult, this felt like watching anime which is enjoyed by all age ranges.

The narrator was great, providing distinctive voices for each character. My only complaint is that he said "Hurry! We have to get out of here!" with the same sense of urgency as "So, how was your day?" I really didn't feel the panic or urgency whenever a character supposedly yelled in panic. Other than that, it was great.