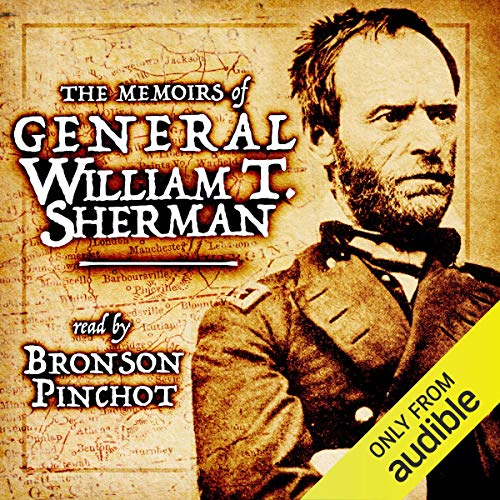 By: William T. Sherman
Narrated by: Bronson Pinchot
Try for $0.00

First published in 1875, General William T. Sherman's memoir was one of the first from the Civil War and was offered to the public because, as Sherman wrote in his dedication, "no satisfactory history" of the war was yet available.

Although Memoirs has been revised and corrected many times over the years, Sherman famously never changed the original text of his recollections. He was not a historian, he said, and said that "any witness who may disagree with me should publish his own version of [the] facts...."

What listeners say about Memoirs of General William T. Sherman

Not for a beginner.

I would not recommend this book if it's the 1st you are reading about the Civil War. In depth descriptions of troop movements and battlefield leadership decisions. Bronson Pinchot could use a "pick me up".

Sherman's Memoirs, first published a decade after the war, provide some excellent insights both to Sherman's view of and participation in the the Civil War. This is the revised edition (ca. 1884) and features minor changes from the original. Though it lacks the narrative force and flow (and some of the charm) of Grant's Memoirs, the inclusion of much official correspondence is a welcome feature. Sherman's brilliant if brittle personality is on full display here, and he clearly is at pains to defend his record and views against all comers on key issues, sometimes letting other's accounts (directly included) do his work for him. While respectful of Grant and other commanders (notably George Thomas), there is less direct praise for them than Grant sometimes provided in his own memoirs. There is a good deal of information on his prewar service and postwar career but personal information about his wife and family is quite minimal. Those wishing to have a good understanding of Grant, Sherman, and the war would do well to read Grant's Memoirs, Porter's Campaigning with Grant, this work and some said biographies of these two men, notably Chernow's great recent bio of Grant. Some have criticized Pinchow's reading and while he occasionally mispronounces a location or name, his voice is clear and expressive and helps keep a work full of digressions mostly on an even keel.

If you want to know what the war was like at the commas level this is it. And right from the man’s mouth right after it concluded.

I felt like I was hearing the voice of this extraordinary general. A great book.

Lots to think about

This memoir makes me wish more of the people involved in the Civil War had left such comprehensive reminiscences.

loved it. a true American hero. in his own words. never a dull moment. a brilliant soldier.

Narrator was almost there

With any audio book, you are at the mercy of the narrator, and this book is particularly lengthy. Fortunately Bronson Pinchot has a pleasant voice, and command of both Spanish and French pronunciation as a bonus. The Achilles heel is his rendering of all the Southern towns and rivers that Sherman marched past. If you can forgive that, it's well done otherwise.

liked the book. I had a hard time with the reader. easy voice to listen to but doesn't pass for the once crazed Ohio General. He seems more appropriate for PBS news hour.

The memoirs themselves are very interesting, but the performer made them even better and brought them to life. Enjoyed every minute.

a great compliment to Grant's memoirs

well read and, especially in our current political climate, a timely read. the issues of the civil war offer many clear parallels to today's divisive policies.