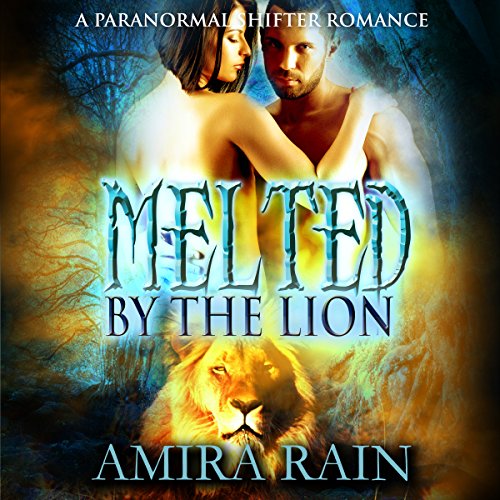 Melted by the Lion

By: Amira Rain
Narrated by: Meghan Kelly
Try for $0.00

In a future where fertile women are so scarce, they are often cryogenically frozen in order to help future civilizations reproduce. Now, after being frozen for thousands of years, Savannah Foster is the latest woman to be melted.

Savannah finds that the man who has thawed her is actually a werelion looking for a mate.

Commander Trevor Beaumont is extremely handsome yet very cold at the same time. He tells Savannah that her job is to become impregnated with his future heir. Nothing more, nothing less.

But there is a twist.

Savannah was not the only female who was melted. At the same time, another woman was melted by the commander, and it is now a competition to see who can be the first to produce a baby for the lion....

Ages 18+ due to scenes of a sexual nature.

What listeners say about Melted by the Lion

This is an enjoyable, easy listening shifter story set many years after a nuclear disaster had decimated the human population and created male shifters. Fertile women were rare and some were cryogenically frozen, to be thawed years later when the population needs demanded. Savannah Foster was one such women, thawed to provide Commander Trevor Beaumont (leader of the lion shifters) with heirs. Trevor and Savannah's attraction sparked from their first meeting but things do not run smoothly, as she is not the only female designated for the Commander and sharing the bedroom was not on Savannah's to do list. It is an interesting story that has action, compassion, romance, cute animals, sexy shifters and some steamy sex scenes. The characters are interesting, somewhat quirky and very appealing, and they all have distinct personalities that the narrator manages to highlight well. This story was fast paced, entertaining and a fun book to listen to. I received this audiobook at no cost in exchange for an honest review.

this was a good book to listen to. I like listening to shifters books. I always find these kind of books interesting.

This is the first time I have ever read of humans being frozen for thousands of years to be mated with a shifter in the future. Found the story very unique and that lion shifters rule the land.
The future dosent look so bad after all. And the gator shifters come in to play that is just wrong in every aspect. Who in their right mind would want to be a gator? Please don't do snake shifters I will never be able to read it. Loved the book and the fact that it had very few sexual scenes so I was able to listen with my 18yr granddaughter. Was also glad there were no vampires. It seems as though most shifter stories also includes them.
I received this free of charge for an honest review.

I really enjoyed this book. When I read the summary I was intrigued by the storyline. It isn't everyday you come across a story about fertile, childbearing age, women voluntarily being placed in cryogenic tubes so they can be mated to shifters once they are awakened. It's all to insure the continuation of the human and shifter species and Savannah just thawed.
Savannah has just been awakened with very little memory of her life before she was frozen, but she knows what food is, how to eat it, how to tell time and why she is waking up where she is. She knows she agreed to bare children to the man she has been awakened mate with, what she wasn't counting on was competition.
Commander Trevor Beaumont has the huge responsibility of keeping the people of his town safe and needs an heir to pass his position to. He isn't interested in love, just children, but don't you know Savannah has a way of melting his icy demeanor and heart one layer at a time.
I appreciated the depth in this story. Nothing was as it seemed on the surface. There were twists and turns all the way to the end and no matter how much Trevor and Savannah tried to deny their attraction for one another it was inevitable and fun to see them fail.
I enjoyed Meghan Kelly's narration and voices in this book. Each character's personality was enhanced by her talent.

Amira Rain and Meghan Kelly are back with another great shifter romance. This time we are brought into the realm of lions and gators. After the nuclear blast that caused many women to be infertile, Savannah Foster, a fertile woman, agreed to be frozen and then thawed at a later date to be able to help to increase the population. After Savannah is thawed she goes to live with Commander Trevor Beaumont but she is not alone. Also thawed was a woman named Veronica and its now a 'race' to see who will be the first to have Beaumont's baby.

The story at times can be a little out there but overall its a great listen. Meghan Kelly does not disappoint with her narration. She brings out the best, and worst, in the characters and makes you want more. I look forward more of both Ms Rain's and Ms. Kelly's work.

Melted by the Lion

I actually quite enjoyed this book. It's not like other shifter books in have read or listened to, and the author has my respect for that. Usually it's werewolves and bears, which have become popular shifter characters, that you hear of. These are lions and alligators.

It had a great mix of romance, action, and other things that were intriguing.

The narrator was excellent, and I think the author picked the perfect woman to read her story.

This isn't your typical story, just so you know. At times I sat there and scratched my head wondering WTH the H and h were thinking, lol.

There is always that one character that makes you want to slap them. This book did not disappoint!

I received a free copy from either the author, narrator, or publisher via audiobookblast·com in exchange for an honest review, which I have given. All thoughts are my own.

Thank you so much for giving me the opportunity to review for you!

I received a promo code in exchange for a honest review. I am so glad I did. The writer did an amazing job describing not just the characters but everything. From the description of Trevor ' s mane to the description of Savanah 's ceiling. Image watching a movie not just in HD but also through in 3D too. The story grabs and holds your attention from the get go and never looks back. Though the story is based in the future with shifters being a result of a nuclear disaster I still found it very realistic and a wonderful paranormal romance book. I thought the narrator did a great job with this piece. If there is any problem to be found with this creative and enjoyable work, it is that I wasn't ready for it to end. I wanted more. This is the first story from this author for me but one thing is for sure, it will not be my last. Truly pleased with it. I am sure if you love shifters like I do, you' ll be pleased also.

This book was an out of the ordinary read for me. It was a fun and well read book. I would read other books by the author or that are narrated by Meghan Kelly. I like that the author gave you a short glimpse into the future of the characters.

This audiobook was provided by the author, narrator, or publisher at no cost in exchange for an unbiased review courtesy of Audiobook Blast."

This story was fun to listen too, this is a paranormal shifter romance where a lion lord seeks fertil women to give him hires. The story takes place in a centry where the world suffered a nuclear fallout making women unfertile. Women who were found to be fertile where ask to volunteer to be frozen until a lord or king needed a heirs. The storyline was good but it could have more dialogue between the main characters. Overall it was a great listen and the narrator didn't excellent job. Worth of credit.
This audiobook was provided by the author, narrator, or publisher at no cost in exchange for an unbiased review courtesy of Audiobook Blast."

What did you love best about Melted by the Lion?

Being that it was paranormal, I knew I would love it, shifters and weres being my favorite. The story line was different than I had ever read before. The story read fast and kept me interested.

Savannah was my favorite because of her romantic ideas and her love of animals. She was always putting herself at risk to rescue animals and humans alike and she stuck to her guns about having a true relationship with a lover and future father of her children.

There are many of great scenes in this book and hard to pick just one. The one that stands out in my mind when I finished was when Savannah risks all to rescue Princess and also to save Veronica, knowing that she would risk Trevor's wrath. Doing the right thing was more important than losing Trevor.

Besides the 2 scenes I mentioned above, the moment when she was in the hospital near the end of the story. She was telling Trevor that she couldn't change her ways even if it meant losing him. Then Trevor allayed her fears and excepted her as she was, promising her his love and a future together.