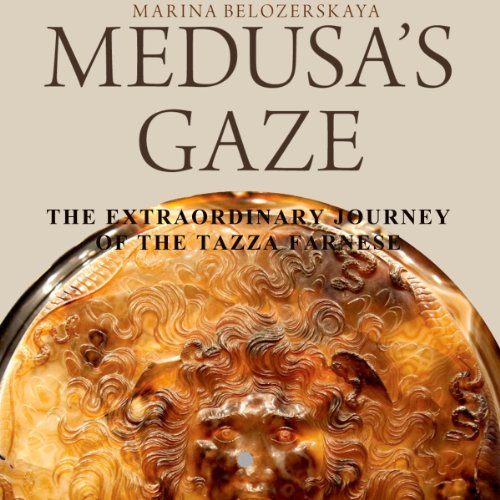 By: Marina Belozerskaya
Narrated by: Jean Alexander
Try for $0.00

The Tazza Farnese is one of the most admired objects from classical antiquity. A libation bowl carved from banded agate, it features Medusa's head on its outside and, inside, an assembly of Egyptian gods. For more than two millennia, these radiant figures have mesmerized emperors and artists, popes and thieves, merchants and museum goers. In this, the first book-length account of this renowned masterpiece, Marina Belozerskaya traces its fascinating journey through history. That it has survived at all is a miracle.

The Tazza's origins date back to Ptolemaic Egypt where it likely enhanced the power and prestige of Cleopatra. After her defeat by Emperor Augustus, the bowl began an amazing itinerary along many flashpoints in world history. It likely traveled from Rome to Constantinople. After that city's sack by crusaders in 1204, it returned west to inspire the classical revival at the court of Holy Roman Emperor Frederick II at Palermo. The Tazza next graced Tamerlane's court at Samarqand, before becoming an obsession of Renaissance popes and princes. It witnessed the rediscovery of Pompeii and Herculaneum, the turbulent aftermath of the French Revolution, and the birth of the modern Italian state.

Throughout its journey, the Tazza aroused the lust of Greek, Roman, Byzantine, and Mongol rulers, consoled a heart-broken duchess, inspired artists including Botticelli and Raphael, tempted spies and thieves, and drew the ire of a deranged museum guard who nearly destroyed it. More than a biography of the world's most cherished bowl, Medusa's Gaze is a vivid and delightful voyage through history.

What listeners say about Medusa's Gaze

This is a minutely researched trip through the world of ancient Greece and Egypt to Renaissance Italy and beyond, presented as context for the Tazza Farnese. One problem is that the tazza's provenance is uncertain or unknown for much of its early life so the story contains a lot of speculation. The art and cultural history background does not rely on supposition and the reader can confidently enjoy the descriptions of techniques, materials, and fashions in collectibles as they change over the centuries, as well as the larger-than-life characters who owned or schemed to own or possibly owned the tazza. Jean Alexander has an agreeable voice and does a reasonable job with the narration, but some dreadful mispronunciations were an unwelcome distraction, among them Farnese pronounced as Farnesa, Emanuele as Emanuela, and for Pliny she couldn't decide between hard and soft 'i'. And the numerous in-text references to 'figure x in the accompanying pdf file' were annoying since there is no 'accompanying pdf file'.