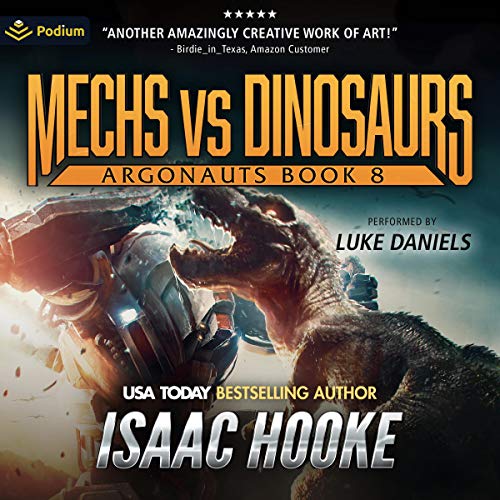 By: Isaac Hooke
Narrated by: Luke Daniels
Try for $0.00

An alien entity has stolen a time weapon.

Rade and the Argonauts must retrieve the weapon and travel back 65 million years to ancient Earth to stop the entity from intervening in humankind's evolution.

The stakes are high. If the team fails, they will return to find a galaxy populated not by humans but by the descendants of the dinosaurs.

The mission won't be easy. Ancient Earth is ruled by giant meat eaters who are just as happy to dine on the Argonauts as on the natives. The team does have one small advantage: their Hoplite battle suits, war machines packed with enough firepower to smash a small army. But how effective are the suits against building-size predators?

As the raging hordes of carnivores close in, the stage is set for the ultimate battle: mechs vs. dinosaurs.

What listeners say about Mechs vs. Dinosaurs

Love love love LOVE this! Great work by Isaac Hooke and Jeff Daniels, together again. The action is fast and furious, including dinosaur hunting and lots of Mech action. Imagine a Military Science Fiction Spec Ops mission involving T Rexes and Titanosaures, and Utah Raptors. Makes for quite the imaginative combat spectacles. Everything about the story is legit, awesome writing by Isaac Hooke throughout. You’ll laugh out loud at the humor sprinkled throughout. Jeff Daniels is amazing at how he portrays EVERY character differently, not just the voice but intonation and personality. 5 stars out of 5!

Character s hard to give a crap about.

I got kind of tired of the author trying to make a total douche bag a loveable rouge. I was hoping that the asshole would suffer some excruciating death through the whole series. Nobody in their right mind would want to work with a person like Bender let alone hire him.