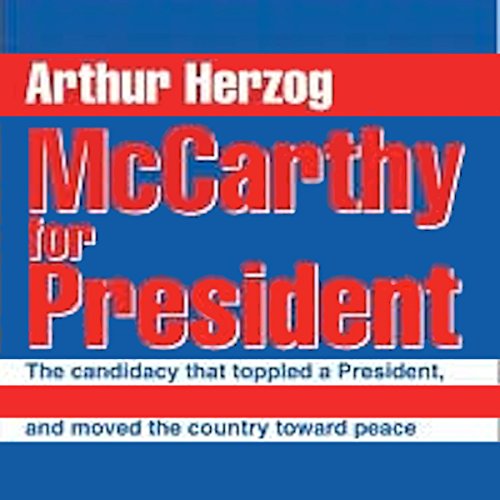 The Candidacy That Toppled a President, Pulled a New Generation into Politics, and Moved the Country toward Peace
By: Arthur Herzog III
Narrated by: Charles Henderson Norman
Length: 9 hrs and 18 mins
Categories: Biographies & Memoirs, Historical
4.5 out of 5 stars 4.4 (5 ratings)

McCarthy for President: The words recall an endeavor both brash and quixotic, unpredicted and unpredictable, a political campaign of permanent interest to voters and historians alike. Even in defeat, the McCarthy movement racked up considerable success: the dramatic toppling of the president, pressure to initiate the Paris peace talks, the political involvement of most of the young generation, and a massive re-examination of the Democratic Party.

Arthur Herzog's account is no mere chronicle, and his vivid writing captures all the color and spirit which imbued the "Children's Crusade" from its first startling success in New Hampshire to the chaos and agony of the Chicago anticlimax. Much of what seemed destined to remain unknown about this unprecedented and erratic campaign is brought to life in McCarthy for President, the first authoritative account of a movement that began, in McCarthy's own words, "to give the system a test".

What listeners say about McCarthy for President

McCarthy: a man of character

What did you love best about McCarthy for President?

I loved McCarthy the person-a political figure with tremendous character-very different than those cliché politicians who base every move on polls and strategic calculations.

What other book might you compare McCarthy for President to and why?

Not sure-but McCarthy almost reminds me of people from my father's generation: a "salt of the Earth" kind of guy!

How McCarthy went to bed one night rather than stay up late to meet with an important political contributor-in general, I found his general unwillingness to solicit campaign contributions to be hilarious!

Yes, and I have. As someone who has worked on political campaigns, it was fun and nostalgic to hear about another one.

What about Charles Henderson Norman’s performance did you like?

I kept believing he was the author.

It's fun to know how/why Johnson lost and how it changed the course of the Presidency.

I could "read" this one over and over I think.

Note: I got this book for free from audiobookblast dot com in exchange for an unbiased review.

McCarthy for President: The Candidacy That Toppled a President, Pulled a New Generation into Politics, and Moved the Country toward Peace is a long title! Almost as long as the book that is 9 hrs and 18 mins! When that i said i did not love this non fiction, i liked. since i am from Norway some of the political things in USA gets lost for me! Arthur Herzog III makes a interesting book about democracy, i will give him that,, but i feel i would get more from this if i was from the states! When that is said i still found it interesting enough to keep hearing it, but i am not sure if i would hear it again!

Charles Henderson Norman reads it a bit to fast for my taste, i feel a bit like i want to gasp and say "sloooower", but that is hard when you hear a book! When that is said, it makes the 9 hrs and 18 mins hard to listen to, and i feel like i need to turn the volume down because it is read that fast! In Alvar Nunez Cabeza de Vaca: American Trailblazer i don't feel like i have the same problem, but this made me a bit tired to hear after time went by! I don't know wha
t it was, but i could not relax and enjoy this because of the way it was read! 2,5 out of 5, so not a hard recommend, and not a hard not recommend on the reading!

Yes, because the non fiction book is wonderful, and Charles Henderson Norman has a truely GREAT VOICE.

The book is NON FICTION, A must for any study of political history

This book should be in every school library.