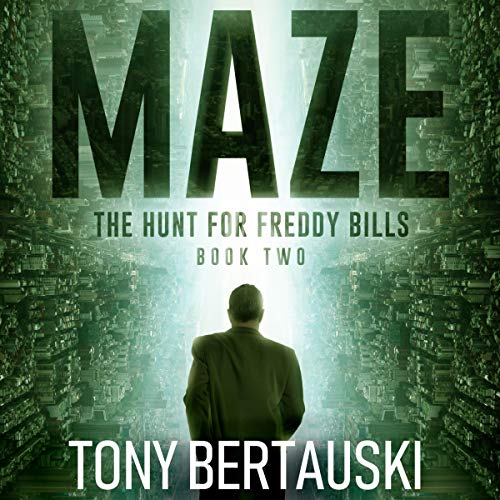 There is no escape. There never was.

Freddy Bills is retired. Back in the day, he was fishing people out of unreality tanks and pulling needles from their heads. That was when it was against the law. Now everyone is doing it, including him. In fact, he’s become quite proficient at dream-stitching unrealities for droppers to ride. He’s one of the best. His plans were to fade into retirement, just him and his dog.

That was before someone from his past appeared.

A string of clues leads him to dig up a past long buried and forgotten. As evidence mounts, he learns the truth about the Maze and it’s true purpose. There’s no escaping his past or future. He was destined to solve the Maze.

He just has to figure out why.

What listeners say about Maze: The Hunt for Freddy Bills, Book Two

Still Unusual Story but coming together

I was given this Audible book for free and am reviewing it. I listened to book 1 first and to be honest was lost throughout most of book, this is the continuation. Though I finally understood the storyline I still kept getting lost as the narrative changed from character to character. found the basic idea behind story interesting and wish I understood it better. I think this is quite a Deep Though type of book with much to think on.

There is no escape

An astonishing book, which takes the reader on acrobatic mental rides through time and - what? - place? Cyberspace? Dimension? Reality? Beliefs? Yup all of these at the very least. Confusing at first, stick with it: it is very much well worth it. To give further story information would destroy the exhilarating effect.

The text is dazzling, at times quite beautiful ('a gossamer thread connecting each one of them'), tactile (''Shadows turned dark and sticky'), or scary ('The hunger inhaled bowler hat after bowler hat'). The ideas behind the story will leave the reader pondering long after the book is concluded. It is a must read. The narration delivered by A.J.Carter is, in every way but one, superb. He reads as if he fully understands every part of the book as It is encountered, not an easy task always, and so assists the reader to understand, also. His speech is fluent, well paced, well intoned and his individual voicing of the several protagonists is exceptional. But there is a downturn in his voice which at least initially, makes the experience slightly depressing to the ear. This goes away after the earlier chapters, or becomes integrated into the listener's involvement (not sure which). Overall, a great performance, and only one repeating editing glitch noted.

Tony Bertauski is an innovative author with the writing ability to back his ideas to give an exciting and profoundly new look at life, as befits a superb science fiction writer. Recommended to everyone who cares to take a leap into their own minds and the familiarity of the unknown.

It is hard to explain the mind trip this book takes you on - trust me you need to read it yourself. It is hard to distinguish where reality/unreality/dream occur through out. The twists and turns are ones you don't see coming. I am very intrigued to read more from this Author.

I called Maze: The Waking Of Grey Grimm, the first book in this series, a ‘Mind Bending Tale That Asks What Is Real?’ and I could say the same for The Hunt For Freddy Bills. The difference with this book though is the questioning of not only what is real but what is life, what is belief, and essentially what makes us who we are? The story starts off feeling a little confusing but is worth the pay-off when it all comes together. I’ll not say any more on the story as it’s a complex tale that could be ruined by revealing any of the plot. Tony Bertauski's writing is imaginative, creating vivid images with beautiful phrasing that altogether makes for a wonderfully entertaining story. I enjoyed this book as much as the first, which left me wanting more of it’s world, so naturally this second instalment has left me feeling the same way. Let’s hope Mr Bertauski has another in the works soon.
AJ Carter returns to add his voice to the audio-book. As with the previous book he delivers a wonderful noir-esque narration that adds to the feel of the book. His voice is melodic and perfect for the Maze books. He deals with each character with the same level of skill bringing each to life with their own distinctiveness.
Overall, a great sequel to The Waking Of Grey Grimm that delivers on so many levels.