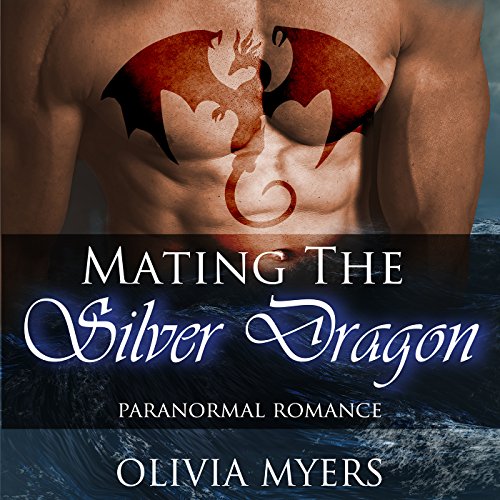 By: Olivia Myers
Narrated by: Tom Johnson
Length: 2 hrs and 16 mins
Categories: Romance, Paranormal
3.5 out of 5 stars 3.5 (26 ratings)
This title is included in Audible Escape

Cora doesn't expect much excitement when she moves to a small town to become a bartender. But when her first night of work turns violent, she's rescued by a handsome stranger with silver hair.

Dragon shifter Maalik doesn't want to be mated to a human woman. It's taboo among dragonkind. But he can't resist the ancient force pulsing within his body, the urge to become one with Cora and fulfill their destiny. He must make her his mate, before time runs out for both of them.

I wish there was more

It felt like I dropped into the end of a HEA. I liked the characters and would have loved to see them develop together

If you could sum up Mating the Silver Dragon in three words, what would they be?

Annoyance, because it shouldn't have ended yet. After the love scene, we needed to know more about what happened to the characters.

The beginning where the characters were introduced and described. Great description .

The eyes across the room between the couple was well written and intriguing.

The Narrator, Tom Johnson, has an incredible voice and kept me listening to the end.

Not My Cup of Tea

I listened to the audiobook version of this story.

Let me start by saying the fact this audiobook was only 2 ½ hours didn’t help. I made it through an hour before I gave up—there were several reasons as to why. First the story itself, well I didn’t like the author’s writing style. This style consisted of “telling” the reader what was happening instead of letting the reader “experience” it while the characters experienced it. There was very little dialogue between character, although that relates back to how the story was written. For example, Malik went over to her and looked into her eyes, then he went back to his seat. He considered if he should talk to her or just leave. He decided he was going to leave. Second, going back to the story itself and the way it was written, it just didn’t call to me. I love supernatural stories but this wasn’t a good one.

The narrator, Lord help me but the guy is a goof! Sorry, Mr. Narrator but that’s the adjective that comes to mind. My personal opinion is that you don’t have the right type of voice to be doing audiobooks. Has anyone seen Stuart the guy from SNL that does the “Look what I can do?” You can find him here: https://www.youtube.com/watch?v=85bvY...

As soon as I heard the narrator’s voice, especially when he did the main female character, well it just wasn’t going to work for me. LOL, I'm pretty sure this story wasn't supposed to be a comedy.

Needless to say, I wouldn't recommend this author or the narrator. Sorry.