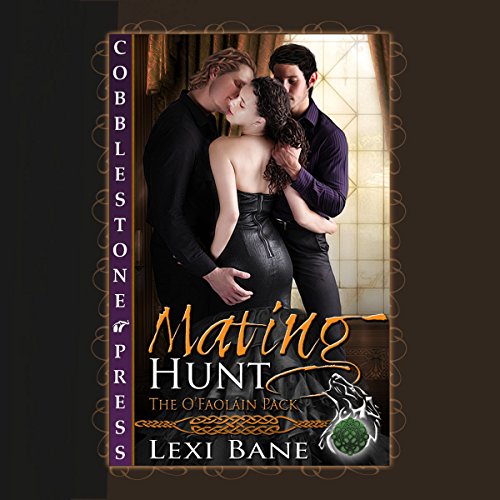 Once they had decided to take the plunge, Marcus and Liam O'Faoláin knew what they had to do. The Mating Balls were the place where they could find the woman who would complete them. Too bad they didn't know there were going to have to hunt for her.

The Mating Ball was the final thing that she had to do while she was in the US. Katerina didn't expect that she would actually find her mate there. Instead, she found two.

What listeners say about Mating Hunt

Loved the Premise, Hated the Performance

Would you try another book from Lexi Bane and/or Allison Cope?

Yes to Lexi Bane but I would probably give Allison Cope a pass. I couldn't understand her soft spoken thick brogue.

Would you recommend Mating Hunt to your friends? Why or why not?

I'm going to have to buy the paperback because I couldn't understand the narrator well enough to be able to finish it.

This short story was long enough for me because the narrator pretty much ruined this mediocre story for me. The narration had a constant muffling sound surrounding the entire production. And the narrator put on an exaggerated accent, a very heavy brogue that combined with the muffling sound to make the whole production hard to understand and significantly suppressed the level of clarity. Too, she spoke a bit too fast and seemed unable or unwilling to show passion or pleasure during the 3 sex scenes. The whole thing was so bad that I almost gave up, but the story was, thankfully, short. So I struggled through it. But I had to work too hard to understand what was said.

Two of the sex scenes were relatively graphic and descriptive and very sexual m/m encounters, and the last one was m/m/f between the main characters Marcus, Liam, and their mate, or as they put it “their lady,” Katerina. Different from other werewolf mating stories I’ve heard, knotting was a part of the sex act, as well. Marcus was the wealthy (family wealth) alpha from Irish royalty. And Liam was his mate. Their “marriage” was easily accepted within their community, but them finding another mate was also ordained and viewed as the norm. Finding their mate was based solely on scent of one-another and was done at a sort of mating ball. Their mating resulted in a werewolf/werewolf/human (female) mating, which also didn’t seem uncommon or abnormal. I liked that, once the 3 of them found of each other, they courted Katerina before jumping into sex. And she initiated the sex when it happened.

Two other aspects that detracted from the story for me was when, upon meeting each other, all 3 of them told each other what their college degrees were and then Katerina equated the degrees with being “highly intelligent.” Considering the meaning of intelligence and how it’s measured, that statement was dumb. And them sharing their educational background, even without the intelligent comment, was quite weird and out of step with the rest of the story. Also, first Katerina was described as not “classically beautiful” and then later described as “very beautiful.” I would’ve preferred greater continuity and smarts in this story. It had a very abrupt ending but not really a cliffhanger. It just left it where another story could follow if the author chose. But another story is not necessary to know the outcome of the 3 of them coming together. It was all just very blah and even lower when the narration is included in the assessment.