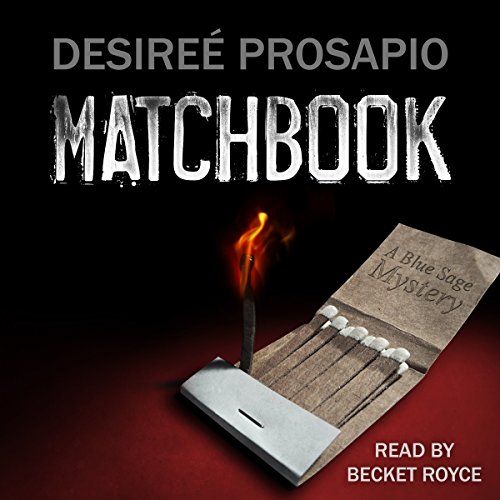 By: Desireé Prosapio
Narrated by: Becket Royce
Try for $0.00

When Carol calls a number she finds in a matchbook, the man promises to answer the mystery of her daughter's death. But he's playing a dangerous game - one she must survive if she's to unravel the truth.

Armed with a fierce wit and determination not even her own shortcomings can derail, Carol faces impossible odds to solve a murder that unraveled her life - her daughter's murder. It's hard enough solving a murder, but throw in homelessness and an obsessed maniac, and it's almost impossible. Almost.

Set on the streets of San Antonio, Matchbook is filled with colorful characters, deep-seated hope, and more than one laugh-out-loud scene. It's a compelling and suspenseful listen that will keep you riveted until the very end.

What listeners say about Matchbook

NEVER JUDGE A BOOK BY ITS COVER!

I was wondering where the author was going with this story when the main character is a homeless drunk and the characters you meet along the way are homeless drunks and drug addicts. By the end of the book I love them all! Everyone of them has a story as to why they are on the streets doing what they do. MUCH LIKE REAL LIFE! The journey the reader takes with Carol keeps you on your toes questioning this character off and on just like the police do. This book has it all... sadness, mystery and humor.

"I was voluntarily provided this review copy at no charge by the author, publisher or narrator."

Adventure and intrigue from the beginning!!

awesome.. amazing and much more.. great narration believable characters, you will be hooked and on the edge of your seat..

I received a free copy of this book and voluntarily decided to review."

I do not believe I will ever look at a homeless women the same way again.
A nice fast paced book. Sad, yet funny at times.
Its funny how one small thing, a book of matches, can change your life.


I was gratefully provided this audiobook at no charge by the author, publisher and/or narrator for an unbiased review via Audio Boom..

Just when I thought I knew what was going to happen next, I was taken around a different corner. Engrossing.

One of those good books you can't stop listening.

What did you love best about Matchbook?

What other book might you compare Matchbook to and why?

Since I don't usually listen to this type of story, I rate this as high as any of the true crime stories I do listen to.

What does Becket Royce bring to the story that you wouldn’t experience if you just read the book?

Yes and I listened to it in less then 2 days (and I worked 8 hours).

A great book that will grab you from the start!

I REALLY liked this book. It grabbed me from the start and I was hooked the entire time. It was the perfect balance of being entertaining, thought provoking, suspenseful and poignant all wrapped into one great story.

I received the Audible version of this book in exchange for an honest review and it was a pleasure to listen to this story. The book is narrated by Becket Royce and she does a fabulous job. Her voice totally fits the personality of Carol and since the book is in first person (Carol’s voice) the audio is a true enhancement to the story.

All in all I totally recommend this book. If you are considering reading it, do! You won’t be disappointed!

I was immediately drawn into this book. The voice of Carol is amusing, clever, sometimes biting and totally unique.

Sometimes you pick up a book and it turns out to be a ride that you won't soon forget. This tale is a mystery for the ages- the characters are so alive they're singing and while I almost always guess the outcomes I wasn't able to anticipate how this one would end. A fantastic read. Would recommend 10/10.

This book could easily be made into a movie!

Matchbook is an original, intriguing, and suspenseful mystery that immediately sucked me in and wouldn't let me go until I had listened to the entire story in two days. Written by Desireé Prosapio, the story revolves around Carol who is a homeless drunk three years after her teenaged daughter's alleged suicide. The main premise of the book is the mystery behind the death of Carol's daughter and Carol's intense need to uncover the truth. There are several twists and turns along the way that I didn't expect and I didn't guess who was the "bad guy" until it was revealed at the very end.

What makes this story stand out from other books of this genre are the great secondary characters. Most of them are very charismatic and full of personality. Similar to Carol's story of why she is homeless, many of the secondary characters are homeless because they choose to be [Carol is homeless because she lost her good paying job and her house after becoming obsessed with proving her daughter did not kill herself, including hiring private investigators who did little more than take her money]. What I liked most though is how the homeless became a little family themselves looking out for each other.

Becket Royce narrated this audiobook and she did a wonderful job. She had great intonation and pace, keeping the story suspenseful throughout. Beckett's style is very natural with smooth overtones and subtle character nuances for each of the characters. In fact, Becket's outstanding narration kept me listening into the wee hours of the morning. Brava!

Carol is a homeless drunk.She gets a matchbook in her panhandle box and calls the number inside.She is connected with a man that has answers to her past.As several more notes come in we get to know her story and meet her social circle.Sometimes fun and always suspenseful, it is a good read.Becket Royce is a fabulous narrator.I was given this book free by the author,narrator or publisher.

This is a story about addiction to alcohol and drugs and a lot of secrets revealed on the journey. You'll keep asking questions like "How did it come this far?" and as the story revolves it gets more and more compelling!

It starts out in the present time where Carol is homeless and poor and it jumps back in time to her previous life where she had it all. She's now begging on the street along with her urge to find out what happened to her daughter. This is a mystery/thriller with a lot of backstory and an extremely well-developed plot that holds your attention to the end!

Becket Royce is a favorite narrator of mine and she really does another great job. She's extremely good with voices and invests a lot in the stories she performs. She can do the most convincing male voices and makes you laugh when the funny stuff appears.

*This book was gifted to me in exchange for an honest review.