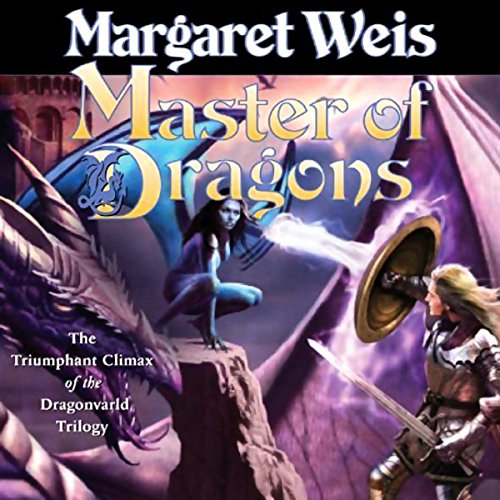 By: Margaret Weis
Narrated by: Suzanne Toren
Try for $0.00

In Mistress of Dragons we were introduced to a world where political deception, greed, and avarice have lead to a violation of the "hands off" policy of the Parliament of Dragons concerning the affairs of men.

In The Dragon's Son twins born out of violence and raised apart discover the secrets of their legacy and the plot to incite a war between dragons and men. Now as the evidence of deceit, betrayal, and perdition is revealed to them, who will emerge as mankind's savior?

A divided Parliament of Dragons where division and self preservation incite war and threaten the order of the ages. A hidden stronghold where insidious and outlaw dragons hatch a race bent on the subjugation of all mankind. The ancient city of Seth and its mystical order of warrior priestesses who have the power to fight back against the attacks of dragons. The twins Marcus and Ven must unlock the secrets of these places and their own powers and overcome their own personal differences as they prepare to clash in a war that may pit brother against brother and dragon against dragon to determine dominion of the world and the survival of the fittest.

Master of Dragons is the epic conclusion of Margaret Weis's triumphant Dragonvarld trilogy, an epic of politics, war, and the delicate balance of the ways of dragons and men.

What listeners say about Master of Dragons

I really enjoyed Mistress and was very eager to start Master of Dragons but I was so put off by the narrators annoying voice, I have not been able to get very far in this book unfortunately I also have the third one. I'm sure the story is wonderful but her voice and vocal variations she used were annoying. The voice she used for girl the Prince has with him in the beginning was so obnoxious I quit listening. I will probably buy the paperback so that I can continue with the story.

The narration for this trilogy has gotten worse with each book. The reason they chose to change narrators each time is beyond me. This latest narrator is horrible. Making any male character sound like an angry Lollipop Kid from the Wizard of Oz. Even the female voices were irritating. Not only did her voice for the Prince sound terrible and unlike any male I've heard in my life, but she read the character as if everything he said was robotic and stunted. I'd suggest you read the book...not listen to it.

Last book put it all together. Excellent ending, kept me captivated. Another well-written seires by Weis!

I love this series and liked the previous 2’s narrators but this one is practically unbearable!!! Would recommend the book not the audio book.

I was really looking forward to this book and the conclusion of the Dragonvarld story arc. The story itself is sound and draws you into it and progresses well. The story does draw you in such that you look forward to hearing what will happen next and hear the rest of the story. I really do hope that we get to see more in this world and that it does not end with this book.

Narration wise, I felt that the narrator did an excellent job portraying the story and did well with the majority of the female voices. However, I found Suzanne's portrayal of the male voices left me wanting. I would have almost preferred the narrator just read the male parts normally instead of attempting to portray the male characters with unique voices as she has an excellent and eloquent reading voice.

I felt after a short while that I almost wanted to cringe during the male narrative sequences and often found it difficult to imagine them as males at all. It made me think of the war of a bunch of munchkins marching off to battle the dragons and that image often times made it seem almost humorous. After a while though, I more or less put the male narrative out of my mind and just concentrated on the story and over time I was able to get over it and found it was not as distracting.

I listened to all three of these books. It's a good, light story that makes for interesting listening while doing boring chores. I would like to know more about what happens to Ven and his siblings after this book ends though!

What was one of the most memorable moments of Master of Dragons?

Even though this is the third book in the series, it was a great story on it's own. I really enjoyed it.

Make sure you start with book one.

I usually like a story with dragons and I liked this series. It was a bit different but still entertaining. Make sure you start with book one.

Awesome Ending to the Series.

The ned to this series will keep you guessing all the way thru to the very end. It will keep in the throws of this epic tale.
I have listen to Earagon and Eldest... But this series is much more.

Nice listen again, if you enjoyed the first two you'll definitely want to finish it up.

Having read other books by Margaret Weis I have read the series of Dragons and found it came up to a good standard. The story teller was excellent, with no problems following the story whilst falling asleep! Would recommend it not only to lovers of all things dragon but also as a good adventure. All three threads are wound up at the end with a nice conclusion.