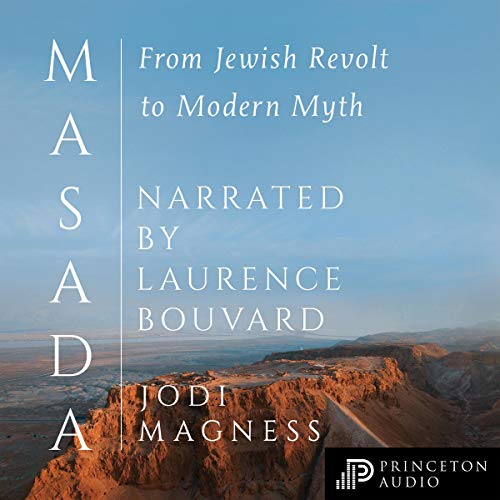 By: Jodi Magness
Narrated by: Laurence Bouvard
Try for $0.00

Two thousand years ago, 967 Jewish men, women, and children - the last holdouts of the revolt against Rome following the fall of Jerusalem and the destruction of the Second Temple - reportedly took their own lives rather than surrender to the Roman army. This dramatic event, which took place on top of Masada, a barren and windswept mountain overlooking the Dead Sea, spawned a powerful story of Jewish resistance that came to symbolize the embattled modern State of Israel. The first extensive archaeological excavations of Masada began in the 1960s, and today the site draws visitors from around the world. And yet, because the mass suicide was recorded by only one ancient author - the Jewish historian Josephus - some scholars question if the event ever took place.

Jodi Magness, an archaeologist who has excavated at Masada, explains what happened there, how we know it, and how recent developments might change understandings of the story. Incorporating the latest findings, she integrates literary and historical sources to show what life was like for Jews under Roman rule during an era that witnessed the reign of Herod and Jesus’s ministry and death.

What listeners say about Masada

This is a school book

I was looking for a novel about the struggle. What I got is a school book synopsis of the event that surrounds the event. I found it boring after two hours

I really enjoyed this book but I think if you were not familiar with the towns and areas she describes it would very confusing. I am familiar with Jodi Magness’ Great Courses lectures and have travelled in the area she describes so I was able to visualize her descriptions. (This book would have been greatly helped with a pdf of maps). I really had a hard time with the narrator though because I am familiar with Magness’ voice and this woman sounded like she should be reading romance novels.

yes, it is a detailed, academic work which many people may find difficult to listen to. I enjoyed hearing the author's personal opinions and accounts. I would prefer the quoted text not to carry with it the reference points as this is not as important to the lay listener. instead, pointing the listener to the source with open/close quotes.
I enjoyed it !