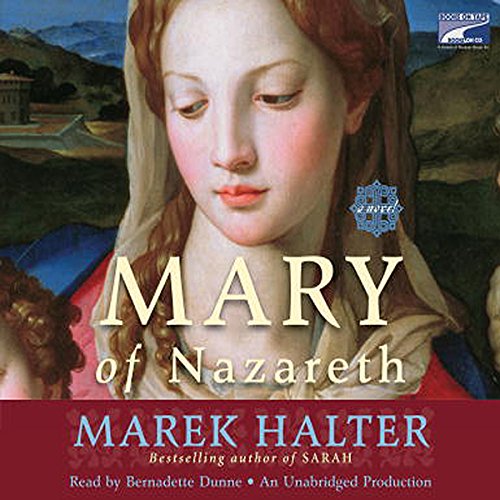 By: Marek Halter
Narrated by: Bernadette Dunne
Try for $0.00

The ancient world and its politics come to life through the eyes of a young Jewish woman, Mary of Nazareth.

Miriam - also known as Mary - was born into a Palestine oppressed by Herod the Great; she is accustomed to living with uncertainty and unrest. But when her beloved father is wrongly imprisoned by the Romans, she takes action. She calls upon a well-known rebel by the name of Barabbas, and together they set out to save her father. A daring escape is accomplished and, against staggering odds, Miriam's father is saved from crucifixion.

Barabbas, flush with the success of the rescue, is intent on leading a full-scale rebellion against Herod and the Romans. Along with Mary and her father, he speaks before Jewish leaders who have gathered from various communities. Miriam feels great frustration as the men endlessly debate morality, the wisdom of rebellion, and the nature of God's will. Having almost lost her father, and knowing she will be ostracized, she nevertheless speaks out against the use of violence. And to her surprise, one man, Joseph, listens. He offers to take her to Magdala, where she will be allowed to study in the company of intelligent, well-read women. This rare opportunity sets into motion a series of events that will change Miriam's life - and the history of the Jewish people - forever.

Based on extensive historical and biblical scholarship, Mary of Nazareth is a revealing, utterly captivating portrait of a woman whose story we only thought we knew.

"A brilliant achievement: packed with drama and suspense, powerfully engaging and thought-provoking. This is Halter at his best." (Eva Etzioni-Halevy, author of The Song of Hannah and The Garden of Ruth)

"By giving a voice to Mary of Nazareth, Merek Halter resurrects one of the most fascinating women in history. A story as richly imagined as it is illuminating." (Michelle Moran, author of Nefertiti)

"Halter provides a dazzling new look at the most famous mother of them all...Mary of Nazareth will inspire women of all faiths who yearn for peace and freedom." (Rebecca Kohn, author of The Gilded Chamber: A Novel of Queen Esther)

What listeners say about Mary of Nazareth

Disclaimer this is completely my opinion: you may agree with it and want to stay away from this book, you may disagree with it and it will draw you to this book. I honestly believe your feelings on this will make or break this book for you.

This is a good story a very good story, well written out and well told. However, it is not the traditional story of Mary form the bible, and it is certainly not the traditional story of the Crucifixion from the bible, and these are the reasons I can not rate it as highly as a well written story should be. I enjoyed the first 3/4 of this book, completely and utterly. the last 1/4 of it ruined it for me.

This is the story of Mary, from her early years (which is the majority of this book). It is not until the last quarter of the book that becomes Mary as Jesus mother, which is skimmed over, as is her role as his mother growing up, focusing on the highlights of special scenes in the bible. And this is where I have issues. I believe Mary was a virgin when Christ was conceived and born. I believe however that Joseph did marry her. I also do not believe, and that story seemed to imply this, that Mary pushed Jesus into revealing himself before time and thus pushing him to the cross, that his death was her fault. I also believe that he died on that cross and was resurrected, not that he was given a potion to make him appear dead and then recused 3 days later from the tomb.

These last pieces at the end of the book destroyed everything about the book that I was enjoying. I know there are faiths that do believe these things and people of those faiths will probably enjoy the entirety of this book. But sometimes the ending can destroy what was an entirely good story and for me that is what happened. Still it was well written and well narrated so I can not rate it horribly, I just can not get behind it and support it due to my own personal beliefs.

Though I enjoyed the characters in the book. As a Christian women I found the book to be a joke and insulting.

This book introduces you to Mary before she became the mother of Jesus Christ. However, if you are a devote Christian with set ideas on how the story goes, you won't like this book. Marek Halter's book requires imagination, and an open mind. This is historical "fiction" after all. I enjoy his books because they are mainly "an educated guess" about each of the biblical female biblical figures. The book is engaging as long as you don't examine it for religious content. I enjoyed it a great deal and often marveled at his imagination.

unrealistic and inconsisten with the new testament

the book portraits Mary as a revolutionary, it implies she was having an affair with Barabus or someone else when she became pregnant with Jesus. In this version Jesus never died on the cross, Mary and her friends tricked everyone into thinking he died then rescued him.