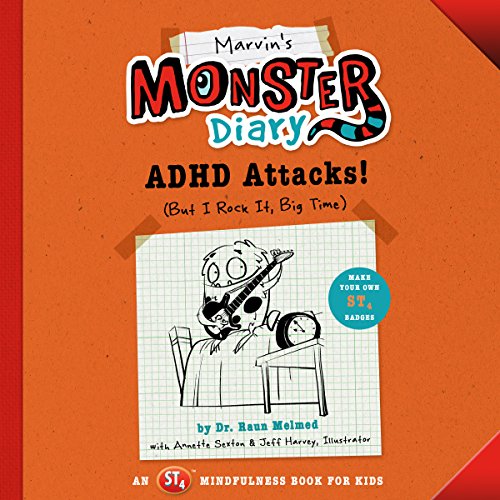 Meet Marvin, a lovable monster with a 15-string baby fang guitar, a rambunctious case of ADHD, and a diary to record it all. His teachers scold him, his parents don't know what to do with him, and his sister is convinced he was raised by triple-tailed monkeys. In short, Marvin's life is feeling out of control until a secret formula changes everything.

In the same humorous spirit of Diary of a Wimpy Kid comes Marvin's Monster Diary: ADHD Attacks! (And I Win, Big Time). Using the "monstercam" and "ST4" techniques developed by Dr. Raun Melmed of the Melmed Center in Arizona, Marvin's Monster Diary teaches kids how to be mindful, observe their surroundings, and take time to think about their actions. Marvin's hilarious doodles and diary entries chronicle his delightful adventures, misadventures, and eventual triumph in a funny, relatable way. It's the one book on ADHD that kids will actually want to hear!

The one that sucked

This was the worst book I ever listen to this sucked!it was so fake