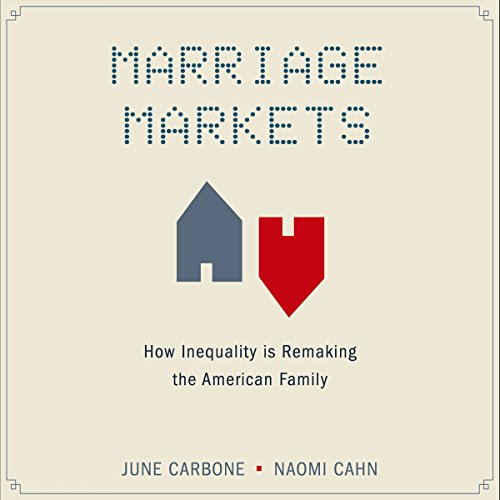 There was a time when the phrase "American family" conjured up a single, specific image: a breadwinner dad, a homemaker mom, and their 2.5 kids living comfortable lives in a middle-class suburb. Today, that image has been shattered, due in part to skyrocketing divorce rates, single parenthood, and increased out-of-wedlock births. But whether it is conservatives bewailing the wages of moral decline and women's liberation, or progressives celebrating the result of women's greater freedom and changing sexual mores, most Americans fail to identify the root factor driving the changes: economic inequality that is remaking the American family along class lines. In Marriage Markets, June Carbone and Naomi Cahn examine how macroeconomic forces are transforming our most intimate and important spheres, and how working class and lower income families have paid the highest price. Just like health, education, and seemingly every other advantage in life, a stable two-parent home has become a luxury that only the well-off can afford. The best educated and most prosperous have the most stable families, while working class families have seen the greatest increase in relationship instability. Why? The book provides the answer: greater economic inequality has profoundly changed marriage markets, the way men and women match up when they search for a life partner. It has produced a larger group of high-income men than women; written off the men at the bottom because of chronic unemployment, incarceration, and substance abuse; and left a larger group of women with a smaller group of comparable men in the middle. The failure to see marriage as a market affected by supply and demand has obscured any meaningful analysis of the way that societal changes influence culture. Marriage Markets cuts through the ideological and moralistic rhetoric that drives our current debate. It offers critically needed solutions for a problem that will haunt America for generations to come.