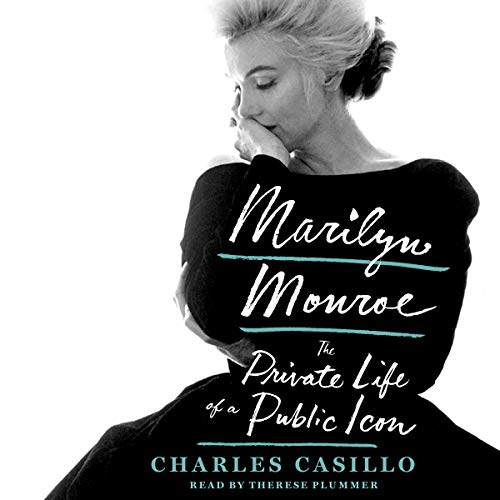 By: Charles Casillo
Narrated by: Thérèse Plummer
Try for $0.00

Based on new interviews and research, this ground-breaking biography reveals how Marilyn Monroe's childhood contributed to her struggle with bi-polar disorder, and impacted her career and personal life.

Marilyn Monroe. Her beauty still captivates. Her love life still fascinates. Her story still dominates popular culture. Now, drawing on years of research and dozens of new interviews this biography cuts through decades of lies and secrets and introduces you to the Marilyn Monroe you always wanted to know: a living, breathing, complex woman, bewitching and maddening, brilliant yet flawed.

Charles Casillo studies Monroe’s life through the context of her times - in the days before feminism. Before there was adequate treatment for bipolar disorder. Starting with her abusive childhood, this biography exposes how - in spite of her fractured psyche - Marilyn managed to transform each celebrated love affair and each tragedy into another step in her journey towards immortality. Casillo fully explores the last two years of her life, including her involvement with both John F. Kennedy and his brother Robert, and the mystery of her last day.

Just a few of Casillo's revelations:

“After all I've seen and heard about Marilyn Monroe, this book is a revelation, an earthy, empathic vision of a real woman who happened to be an ethereal goddess.” (Mary Gaitskill, best-selling author of Bad Behavior and The Mare)

“Casillo explores the myriad facets of Monroe’s personality with a respectful but incisive eye...an intricately nuanced portrait of this misunderstood idol.... A worthy addition to the Monroe canon.” (Booklist)

“A well-written examination of the mystique of a woman who still fascinates decades after her untimely death.” (Publishers Weekly)

What listeners say about Marilyn Monroe

Casillo has written a well-paced and literally assessable narrative. His criticisms are even-handed, written with a journalist's commitment to objectivity (for the sake of this review we stipulate, whether it's true or not, that objectivity is a goal of journalists) and clarity; his arguments are well-reasoned and cogent. I would recommend this book to anyone newly curious about Marilyn's life, with a few caveats:

I can appreciate Casillo's aversion to the more outlandish claims about Marilyn's life. Authors have exploited Monroe in death as others did during her lifetime. Norman Mailer famously admitted that much of the salacious material in his biographical essay on Marilyn's life was fabricated; written to maximize book sales, because he "needed the money." No doubt others did the same. That Casillo chose to limit his scope to Marilyn's lifetime, and reasonably well-established facts, is fine, but potential readers should know that there's much more to the story.

In 2018 (when this book was published) any story of Marilyn Monroe's life really should include a nod to Marilyn lore. One need not elaborate on, or give credence to, the myriad hypotheticals and speculations about Marilyn's life and death, but a brief sketch of Marilyn historiography only further illustrates the lasting impact of her life and imprint on the collective psyche of global popular culture. Casillo ignores most of the controversial elements in Marilyn's story and in doing so attenuates the narrative to the detriment of his readers' understanding of her life. Was Marilyn a pawn of the KGB, sent to seduce and elicit Top Secret information from the President of the United States during post-coital pillow talk? Almost certainly not, but a lot of people believe strongly that indeed such a plot existed. The mere mention of such theories does not imply endorsement, and the omission is a bummer, if not a deal-breaker.

Aficionados won't find much new in this book. The promotional material on Audible and Amazon state that it's based on new interviews and research, but that material, and Casillo's research, seems to consist largely of watching the, admittedly remarkable, video now available on YouTube. And while Casillo's analysis of these videos is not particularly insightful, again we can understand this editorial decision. Watch the test footage, dear reader, of Something's Gotta Give, on YouTube then try to describe it. We just don't have the words...

I would recommend this book to Marilyn neophytes. Fans of MM biographies will enjoy it too (I did. I'd give it 3 1/2 stars if I could), but you won't find anything new.

I am a Marilyn fanatic, and Charles Casillo's book is the most satisfying fact filled account I have ever read. This is the real skinny on who she loved, why she was always late. If you are curious about the great Marilyn Monroe this book is sure to satisfy.

Mental illness, Hollywood, sexism, and the valiant beautiful woman who suffered all the flames.

I’m so glad I tried this book. It’s very well written. The narrator, one I didn’t like in the past, was perfect here. I’m very glad I came to know Marilyn’s real story.

Listened to it at least 3 times in a row the first week I bought it. My daughter did her book report on Marilyn, I I got to listen to it again with my daughter.
Enjoyed it very much!

an american tragedy I barely knew

Basic:
The audio voice, when slowed down to .8 or .9 was magnetic and completely drew me in. The information contained, while obviously biased, was a genuine learning experience. By the time the final sentence finished, this book left me feeling strong emotions.

Complaints/ Problems:
Other than time skipping around, it was a good read. We, as the audience, already know how Monroe ends but after the tenth reminder, I became more annoyed than impressed with the writer’s ability to turn a phrase.

I also would have enjoyed some more information on her mother and her mother’s friendships and relationships. While I was impressed that this information was even included, I did wish to know some more intimate details.

Specifically: reactions to large life events (such as marriages/ divorces), the interactions following the spoken-of fractures and or moves across country, any more information regarding her father and the conversations, and the initial and now faded reactions of Monroe’s suicide.

Personal info:
I have always known about Monroe. I grew up surrounded by images and quotes, her movies sometimes airing on television, and every Halloween seeing her white-dress costume in stores. I hadn’t ever realized there was anything more to her than a silly girl in a white dress singing Happy birthday Mr President.

Overall:
All of Monroe’s life was truly, very, very sad. She ended up being typecast as the sweet but dumb blonde, when in reality, she was very clever. She understood what people wanted from her and she was able to use it to her advantage. Very giving & extremely lonely, the author was able to convey her need for connection—and ultimately, her inability to form lasting bonds. Simply put, the people around her used her for their own sakes. And that is resonating.

I’m sorry that she wasn’t able to obtain any peace or lasting happiness in her short life.

Great narration except for the names of famous Hollywood folks being mispronounced. Elia Kazan (eelya) and Leslie Caron(carone), and there’s no need to put on a deeper false baritone when quoting a man’s comments. Otherwise, an exceptional speaking voice that draws the listener in.

Ok story. Expected more juicy tidbits about Marilyn and the President or even Bobby but I didn’t get. The story needed a better more interesting reader, very bland and boring.

Marilyn Is a Sad Story

Mostly I just felt sad for Marilyn as I read the story. And, I think the author's assessment of her talent is over-rated. I went back while listening to the book and watched some of her movies. She was an okay actress, but not a great one. She had a sad sad life. The pills and booze and the endless promiscuity ruined her. She had no moral core. I couldn't finish the book; I quite with just over five hours remaining. Her life was one big train wreck. I hope she can find some peace now.

This book, although well written tells nothing, and I mean nothing that I didn’t know about Marilyn. The author skated on the safe side, and did not even abstractly allude to the truth and mystery of her life. It was almost as though the author was trying to stay in good graces with the accomplices of Marilyn’s OBVIOUS murder. I would not recommend this book to anyone. Total waste. No new information given.

I thoroughly enjoyed this book ! It gives you an understanding of the complexities of Marilyn Monroe in an unbiased way. I think everyone feels that, if it were possible, they could have saved her from her fate, sadly those illusions are destroyed when you read this. A unique account of a unique woman. I will add that the voice over was perfect.

A balanced portrait of Marilyn Monroe. Once I started listening I couldn’t stop. The writer gives a compelling account from the heart, without hiding Marilyn’s frailties. Loved the way her story was told. I would definitely recommend.

A quest for real love.

Marilyn Monroe,or Norma Jean,why did they change her name ?.this book is the best biography of Monroe I have read or listened to as it goes into the reasons why ?more..the narration is superb..altogether,a satisfying listen.

I think that this is the most believable of all the accounts written of Marilyn's life and passing. Truthful and honest and extremely sad. Continually abused from a young age: by others and then by herself. Trapped in a living nightmare with no visible way out. It is well written and well narrated. What more can I say. Peter Lawford should have gone round to Marilyn's house. Maybe he would have saved her life. This time.

Whilst I find a need to keep listening this was disappointing. The story jumped around and I struggled to follow it. The narrator was patronising sounding more like a children's narrator. I did not get past half way so it may have got better. Please do not take my work for the whole book.

Beautiful and sad sad story. Well written and researched. The narrator did an awesome job too!