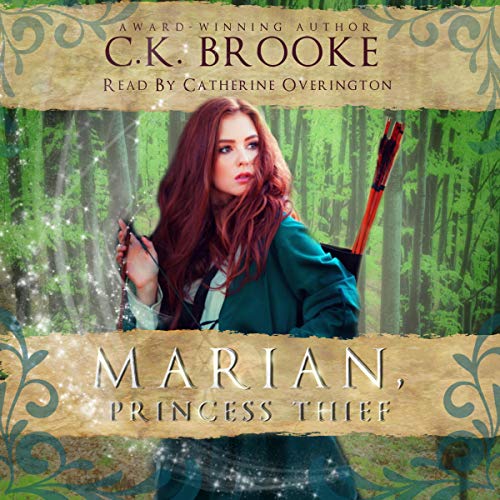 By: C.K. Brooke
Narrated by: Catherine Overington
Try for $0.00

"There is no man called Robin Hood...I am no man."

Lady Marian, once the beloved Princess of Sherwood, was only 16 when her father rode off to fight in the Crusades, leaving his kingdom under the despotic rule of his brother, Prince John. The night her uncle sends an assassin upon her, Marian flees to Sherwood Forest, where she meets and forges an unbreakable bond with six other outlawed young women.

Now, the 19-year-old princess-in-exile and her Merry Maidens gallivant through the greenwood, cloaked under the aliases of Rob-in-Hood and his Merry Men. Together, they uphold their vendetta of mischief, undermining the Prince at every turn, robbing the rich and giving to the poor - all while outrunning their sworn nemesis, the odious Sheriff of Nottingham.

After a scheme takes an unexpected turn and Marian’s only recourse is to abduct the Sheriff, the lady brigands find themselves in over their heads, stuck with an unrelenting and formidable captive. But, as Marian is about to discover, sometimes people aren’t what they seem...after all, she would know.

Revisit the legend of Robin Hood like never before in this wildly imaginative, adventurous, and utterly romantic retelling by C.K. Brooke, multi-award-winning author of I, Guinevere and Secrets of Artemis!

MARIAN PRINCESS OF THE THIEVES

I LOVED THIS AUDIBLE BOOK! MARIAN WAS SO MUCH FUN TO LISTEN TO. AND THE BANTER BETWEEN HER AND THE SHERIFF OF NOTTINGHAM WAS HILARIOUS!