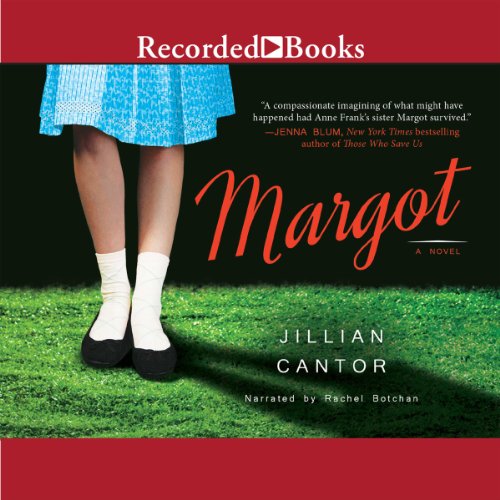 By: Jillian Cantor
Narrated by: Rachel Botchan
Try for $0.00

Anne Frank has long been a symbol of bravery and hope, but there were two sisters hidden in the annex, two young Jewish girls, one a cultural icon made famous by her published diary and the other, nearly forgotten. In the spring of 1959, The Diary of Anne Frank has just come to the silver screen to great acclaim, and a young woman named Margie Franklin is working in Philadelphia as a secretary at a Jewish law firm. On the surface she lives a quiet life, but Margie has a secret: a life she once lived, a past and a religion she has denied, and a family and a country she left behind. Margie Franklin is really Margot Frank, older sister of Anne, who did not die in Bergen-Belsen as reported, but who instead escaped the Nazis for America. But now, as her sister becomes a global icon, Margie's carefully constructed American life begins to fall apart. A new relationship threatens to overtake the young love that sustained her during the war, and her past and present begin to collide. Margie is forced to come to terms with Margot, with the people she loved, and with a life swept up into the course of history.

What listeners say about Margot

I really want to understand if there is any truth to it. The story was interesting and compelling. I do wish it would have given us more information about the end story and an epilogue with historical evidence about Peter, her father, and especially if it was really true.

Had higher hopes for this intriguing story...

Unfortunately, I probably would not. I've always been intrigued by the story of Anne Frank and her family, and I love historical fiction (and "what if" stories), so I had very high hopes for this book ... and was rather let down. None of the characters are particularly memorable or engaging, not even the heroine herself, sad to say -- and the story never really goes anywhere, though it does make a try at a (tepid) romance; but again, it was hard to care about the characters involved. The author does have a nice way with words, no complaints there; it was just not very interesting -- I can hardly recall a gripping moment in the entire story, and the story was full of potential for gripping moments. Also, the narrator did a nice job but she sounded much too young for a Margo who was supposed to be in her mid-30s (she sounded maybe 17), so it was difficult as a listener to conceptualize Margo as a mature woman.

Would you be willing to try another book from Jillian Cantor? Why or why not?

I might, she does have a nice way with words, just didn't enjoy this story.

She has a nice pace, a pleasant voice -- but she sounded much too young to portray this lead character.

It is the what if!

To take a somewhat famous family and to do the what if, what if I survived, what if my Diary was found. Will I find happiness. Will someone love me. How do I come to terms with my past and go forward. This is a great listen to.

Good story, could have been great

The build to the emotional climax Margot experience was brilliantly written. The resolution was a pink taffeta happily ever. The psychology of her recovery would have been fascinating.