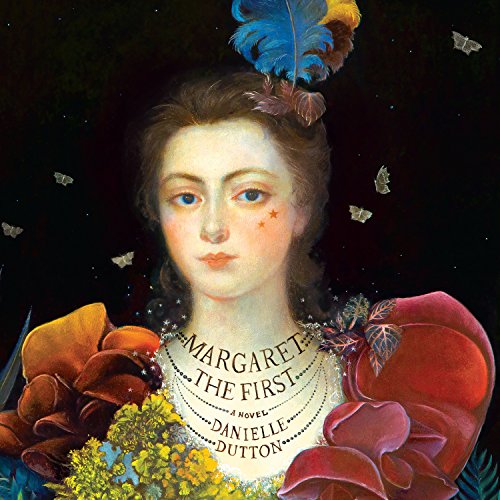 By: Danielle Dutton
Narrated by: Lucy Rayner
Try for $0.00

Margaret the First dramatizes the life of Margaret Cavendish, the shy, gifted, and wildly unconventional 17th-century duchess. The eccentric Margaret wrote and published volumes of poems, philosophy, feminist plays, and utopian science fiction at a time when being a writer was not an option open to women.

As one of the queen's attendants and the daughter of prominent Royalists, she was exiled to France when King Charles I was overthrown. As the English Civil War raged on, Margaret met and married William Cavendish, who encouraged her writing and her desire for a career. After the war her work earned her both fame and infamy in England; at the dawn of daily newspapers, she was "Mad Madge", an original tabloid celebrity. Yet Margaret was also the first woman to be invited to the Royal Society of London - a mainstay of the Scientific Revolution - and the last for another 200 years.

Margaret the First is very much a contemporary novel set in the past. Written with lucid precision and sharp cuts through narrative time, it is a gorgeous and wholly new approach to imagining the life of a historical woman.

What listeners say about Margaret the First

A short, vibrant, nearly perfect novella. I'm not sure if I loved it more because of the prose, the protagonist, the setting, or because it was infused with life, energy, worlds. I'll steal an hour at lunch to finish my review tomorrow at work. Lovely.

What did you love best about Margaret the First?

I didn't know about Margaret and that she was one of the first women to write and publish and to speak her mind in a man's world. She was portrayed as having a fantastic imagination but was able to keep up with the best minds of her era.

She did a perfect reading of a book that had a unique writing style. Her pacing was excellent and her low male voice was tolerable, though I wish women didn't feel they have to distort their voices to read a male character's part.

Yes, but I couldn't.

This is a delightful book - I felt sympathy for Margaret's rejections and admiration for her accomplishments. That her husband supported her writing was also admirable.

Margaret was quite a character

I only wish there were more personal details about her relationships in the second half of the book.

Had to complete for book club

If not for book club, I would not have listened. Never could get into it. Chirpy narrator distracted from what may have been an interesting story. Awful.

detailed view of the past

A wonderful view of the past in colorful detail. Not overly dramatic which adds to the realism.

I had a really hard time following this book because of the way it was written. The book flips from first person to third person views in the beginning and then wholly first person. The way the story is written out in first person is disjointed and hard to follow sometimes. The sentences are extremely fragmented and confusing. I wanted to like the book but the story was boring and hard to follow.