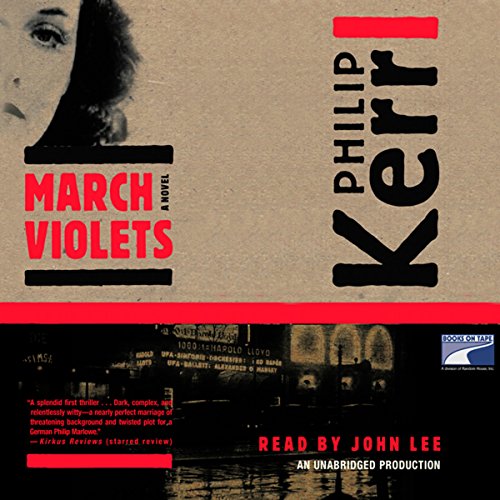 By: Philip Kerr
Narrated by: John Lee
Free with a 30-day trial

Hailed by Salman Rushdie as a “brilliantly innovative thriller-writer,” Philip Kerr is the creator of taut, gripping, noir-tinged mysteries set in Nazi-era Berlin that are nothing short of spellbinding. The first book of the Berlin Noir trilogy, March Violets introduces listeners to Bernie Gunther, an ex-policeman who thought he’d seen everything on the streets of 1930s Berlin - until he turned freelance and each case he tackled sucked him further into the grisly excesses of Nazi subculture. Hard-hitting, fast-paced, and richly detailed, March Violets is noir listening at its best and blackest.

"The brutality and corruption of Nazi Germany serve as the backdrop for this impressive debut mystery novel. Scottish-born Kerr re-creates the period accurately and with verve; the novel reeks of the sordid decade that saw Hitler's rise to power." (Publishers Weekly)

"Echoes of Raymond Chandler, but better on his vivid and well-researched detail than the master." (Evening Standard, London)

What listeners say about March Violets

Philip Kerr is one of the very best. Think literary thriller (like John Le Carre) combined with a big dash of hard boiled attitude (like Raymond Carver). The detective navigates an increasingly Nazi-fied Berlin, trying to stay below the Nazi radar while maintaining a private stance of utter contempt for the rising regime. The story has plenty of twists and plenty of turns, but the atmosphere and characters are the real spell-binders. Highly recommended.

One of the BEST

A gritty, noir thriller, and the first of what promises to be a gripping series. Bernie Gunther has left the police force and struck out on his own as a private investigator. What makes his work interesting is the time and place: Berlin, 1936 when the Nazis are in full power and preparing for the Summer Olympics. His services are more or less forcibly retained by a millionaire industrialist who has just lost his beloved daughter and her husband to a fire in their home. Both bodies are found in their bed, and the safe containing a priceless diamond necklace has been broken into. Was this a straightforward murder and burglary or is there more than first meets the eye? As Gunther investigates local jewelry vendors, he can't help but be horrified at how the Jews are being taken advantage of, with glaring anti-semitism at it's peak. Desperate to sell their valuables to get away from the repressive measures taken against them (most professions are banned to them, and everyone is quick to add "German" as a preface to their profession on their business cards to indicate they are of good Arian stock), they are forced to sell their belongings well below the market price. Trying to find out anything in this repressive system is bound to bring about all sorts of complications, and when Bernie's widowed secretary is too scared to return to work after being bullied by Nazi police officers, he's delighted to find a beautiful and single replacement for her in ex-journalist Ilse, but their romantic involvement is bound to render him that much more vulnerable. “March violets” was a term used for late-comers to the Nazi Party after the passage of Hitler's Enabling Act which rendered him a dictator on March 23, 1933. In May, the Nazi Party froze membership, and those with the lowest membership numbers were given preferential treatment, though everyone was eager to be seen as a Hitler supporter. Not so Bernie, who has Jewish clients and doesn't care for the views of a party he never chose to support, which is dangerous in and of itself because dissidents are daily being sent to concentration camps, where few are expected to survive the harsh conditions. I loved every bit of this private dick story set during a very dramatic period in history. Those who've enjoyed the more recent John Russell series by David Downing are bound to find this precursor highly satisfying. I'm very much looking forward to the next book!

An LA type PI in Nazi Germany. Lots of possible material to grow and build new books. A very good start.
If it gets a little dirty and colorful at times, I guess that is the way it could have been. The ending caught me by suprise.

This book gives you some insight into not so distant past and transports you to an era that is a blight on German history. Well researched and well written... I will definitely get this entire series.

This is a very entertaining story. The hero is a classic 1930s detective, the story moves nicely along, but the best part was the setting -- Germany 75 years ago. It was completely captivating.

One of the best historical fiction audiobooks I've heard. I could not wait to find out how the detective was going to unravel this case. Nice story, good twists and turns that kept the story very interesting. I was a bit remiss about the ending, but hey I guess you can't have it all.

More a Detective Novel than Thriller...

I love a good mystery or thriller, and I love any novel set in the WWII era. And John Lee is perhaps my favorite narrator. So this book seemed to have all the right elements. But as it turns out, it's more of a detective novel than a thriller. Not my cup of tea.

If you like the classic Raymond Chandler, you'll love this book. It's well written an well narrated, and seems to be an homage to that 40's Noir style. But I didn't enjoy it as much as I'd expected.

This was a great period detective thriller -- but an excessively graphic one. Mr. Kerr earns high points for his research and detail but the rape scene was, in my mind, too much. If anything will keep me from purchasing his books in the future, it is the nightmares that I have had after listening to the graphic details of that scene.

Would you listen to March Violets again? Why?

fairly clever plot, enjoyed the historical evocation of an era, one of my favorite narrators

What other book might you compare March Violets to and why?

the second in the series, already listening

Have you listened to any of John Lee’s other performances before? How does this one compare?

yes...about the same. at least he doesn't try to fake a german accent

the corny tough-guy dialogue and overblown similes became quite tiresome. also, the sex scenes....could definitely do without...i'm not a prude but they detract and are completely pointless.