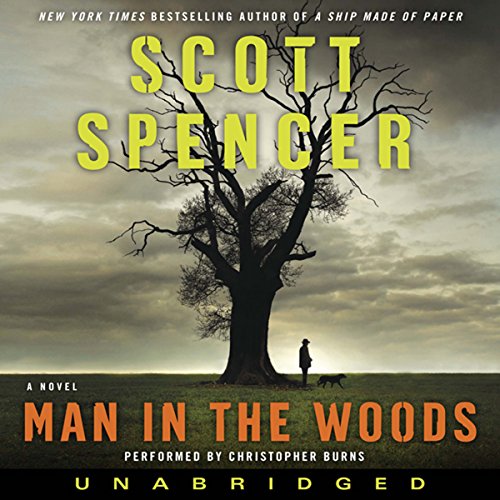 Man in the Woods

By: Scott Spencer
Narrated by: Christopher Burns
Try for $0.00

One of the most acclaimed modern American novelists, Scott Spencer captures the intensity of human passion - and its capacity to both destroy and redeem - with unparalleled precision and insight. Now, in his most stunning novel yet, this wry, witty, and deeply sensitive writer returns to the territory of his New York Times best seller A Ship Made of Paper, in a gripping and provocative psychological thriller of morality and manhood, choice and fate.

Paul has been on his own since he was a teenager, leading a life of freedom and independence, beholden to no one and nothing. Fearless, resolute, and guided by his own private moral code, he has hunted for food in Alaska, fought forest fires, and been deputized in a manhunt for a kidnapper in South Dakota.Once he thought his life would have no particular rhyme or reason, touched only by transient strangers. Then he meets the beautiful, intelligent, loving Kate Ellis and her daughter, Ruby, who offer order and constancy. But Paul is a man of deep convictions, and the compromises we all make to get along in the world elude him.

On his way home after rejecting a job remodeling a luxurious Manhattan apartment, Paul stops to gather his thoughts at a state park just off the highway. Instead of peace, he finds a man savagely beating a dog, and in a few fateful moments Paul is plunged into a world of violence and onto a tumultuous journey of self-knowledge, guilt, and redemption.

With the psychological acuity and razor-sharp prose for which he has been celebrated, award-winning novelist Scott Spencer once again takes us on an unforgettable journey of manhood lost and found.

“In this brilliant novel, Scott Spencer further expands his range to embrace our relations with animals—with the loyal pets that consent to share our domestic lives, and with the darker, more alarming beasts that lurk within even the most compassionate and conscious human beings.” (Francine Prose)
“[A] compelling setup and stunning conclusion....The depth of the characters, the questions they ask and the challenge they confront stay with the reader long after the conclusion.” ( Kirkus Reviews)
“[Spencer] writes love stories with such beauty that you want to savor every surprising phrase, but his intense, intriguing plots propel you to race along the pages. He does it again in his new book, a complex novel... fresh, and compelling.” ( Cleveland Plain Dealer)

What listeners say about Man in the Woods

The narrator was the type who makes you work very hard to try to ignore, while still keeping track of the story. Quite a difficult task. Maybe someone who prefers flat mystery novels would like this book?

What could Scott Spencer have done to make this a more enjoyable book for you?

Been a sharper writer.

In every way. The voice of Kate Ellis was particularly grating.

Stay away if you like really great writing and great performances.

Good book, but not a perfect reading

This is a good book - no question about it. The characters are complex and complete. The author confronts questions of morality that are just as complex and he doesn't resort to any easy ways out.
However I did not care for Christopher Burns' reading. He uses special emphasis and dramatic pauses constantly, which gets annoying and muddies the drama inherent in the writing itself.

I bought this listen after an NPR interview with the author. I was thrilled to be able to read a book by someone who is interested in one of my preoccupations: life goes along just fine, and then something happens and after that, nothing is the same.

However, in this story, everything not only goes on as before, it even gets better! The open-ended final scene is not a valid consequence to the protagonist's behavior, and instead of an introspective story about how the main character deals with his life after committing a crime, the act itself is just background noise.

I tried to find something to like in this book but it was impossible. The sentences go on and on so long that by the time you get to a full stop you've forgotten what the point was. There are too many meandering irrelevant stories included with every character's appearance, and there are way too many characters. An entire chapter is devoted to describing what everyone is wearing at a New Year's Eve party. And I can't believe the author made the Y2K thing such a big deal - didn't he remember it was nothing? Or is this an old book repackaged?

The narrator reads in an emphatic sort of way, stressing every word, so the reading ends up sounding slightly sarcastic and artificially exaggerated.. I don't think that was the author's intent, but the reading does not sound genuine.

Nothing in this book worked for me. In spite of the reviews, it's not about bonding with animals, and it's not about how you would deal with committing a crime. It's just...well...much ado about nothing.

Enjoyed the book and the presentation. The story is an excellent narration of s good hearted human being caught up in the addiction of gambling that controlled his life and utimately led to a sad ending.