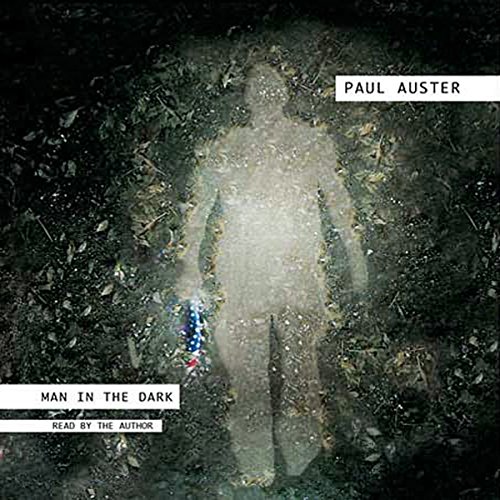 Man in the Dark

"I am alone in the dark, turning the world around in my head as I struggle through another bout of insomnia, another white night in the great American wilderness."

So begins Paul Auster's brilliant, devastating novel about the many realities we inhabit as wars flame all around us.

Seventy-two-year-old August Brill is recovering from a car accident in his daughter's house in Vermont. When sleep refuses to come, he lies in bed and tells himself stories, struggling to push back thoughts about things he would prefer to forget: his wife's recent death and the horrific murder of his granddaughter's boyfriend, Titus.

The retired book critic imagines a parallel world in which America is not at war with Iraq but with itself. In this other America, the twin towers did not fall, and the 2000 election results led to secession, as state after state pulled away from the union, and a bloody civil war ensued.

As the night progresses, Brill's story grows increasingly intense, and what he is so desperately trying to avoid insists on being told. Joined in the early hours by his granddaughter, he gradually opens up to her and recounts the story of his marriage. After she falls asleep, he at last finds the courage to revisit the trauma of Titus' death.

Passionate and shocking, Man in the Dark is a novel of our moment, a book that forces us to confront the blackness of night even as it celebrates the existence of ordinary joys in a world capable of the most grotesque violence.

"Works beautifully . . . This is perhaps Auster's best book. Like Vonnegut's classic anti-war novel [ Slaughterhouse Five], Auster's book leaves one with a depth of feeling much larger than might be expected from such a small and concise work of art." ( San Francisco Chronicle)
"Auster's latest astute and mesmerizing metaphysical fiction . . . A master of the matter-of-factly fantastic, Auster tells an utterly authentic story of culpability and survival, the vortex of loss, and our endless struggle to translate terror into understanding." ( Booklist, Starred Review)
"Auster has crafted a stirring, politically charged portrait of the power of fiction." ( The Star-Ledger, Newark)

What listeners say about Man in the Dark

I only buy Paul Auster self narrated books now

Another great story read by the author. His reading of the book brings it to a deeper place. At first i wasn't sure about his narration. The semi monotone voice is a little off putting, but after the first 10 minutes i couldn't imagine it read any other way. Its a great listen, hard to turn off. Paul Auster has yet to let me down, i highly recommend this book. After you've listened to this and loved it, i suggest you check out Invisible, a great story.

Man in the Dark Review

Paul Auster continues to deliver incredible stories. This story was hard to put down