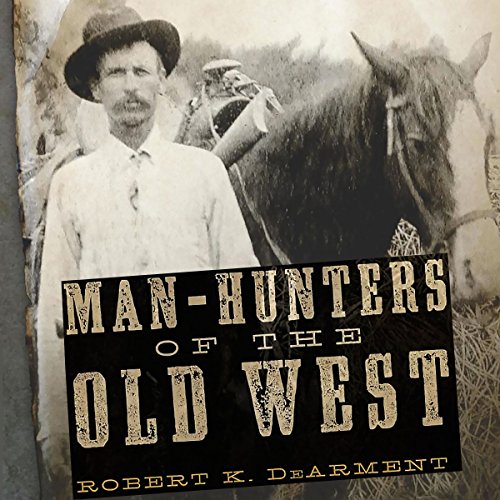 Man-Hunters of the Old West

By: Robert K. DeArment
Narrated by: Thomas Stone
Try for $0.00

Settlers in the frontier West were often easy prey for criminals. Policing efforts were scattered at best and often amounted to vigilante retaliation. To create a semblance of order, freelance enforcers of the law known as man-hunters undertook the search for fugitives. These pursuers have often been portrayed as ruthless bounty hunters, no better than the felons they pursued. Robert K. DeArment's detailed account of their careers redeems their reputations and reveals the truth behind their fascinating legends.

As DeArment shows, man-hunters were far more likely to capture felons alive than their popular image suggests. Although "Wanted: Dead or Alive" reward notices were posted during this period, they were reserved for the most murderous desperadoes. Man-hunters also came from a variety of backgrounds in the East and the West: of the eight men whose stories DeArment tells, one began as an officer for an express company, and another was the head of an organization of local lawmen. Others included a railroad detective, a Texas Ranger, a Pinkerton operative, and a shotgun messenger for a stagecoach line. All were tough survivors, living through gunshot wounds, snakebites, disease, buffalo stampedes, and every other hazard of life in the Wild West. They also crossed paths with famous criminals and sheriffs, from John Wesley Hardin and Sam Bass to Wyatt Earp, Butch Cassidy, and the Sundance Kid.

Telling the true stories of famous men who risked their lives to bring western outlaws to justice, Man-Hunters of the Old West dispels long-held myths of their cold-blooded vigilantism and brings fresh nuance to the lives and legends that made the West wild.

What listeners say about Man-Hunters of the Old West

What would have made Man-Hunters of the Old West better?

The narrator was running his words and sentences together, making him hard to understand. Or perhaps the sound engineer did a poor job.

What could Robert K. DeArment have done to make this a more enjoyable book for you?

The characters he wrote about were certainly interesting, but hardly memorable. The west was full of these colorful characters, so the author had a very large selection of subjects to write about.

Would you be willing to try another one of Thomas Stone’s performances?

What character would you cut from Man-Hunters of the Old West?

None, they were all interesting in that they gave the reader a sense of the type of men who tamed the western territories..