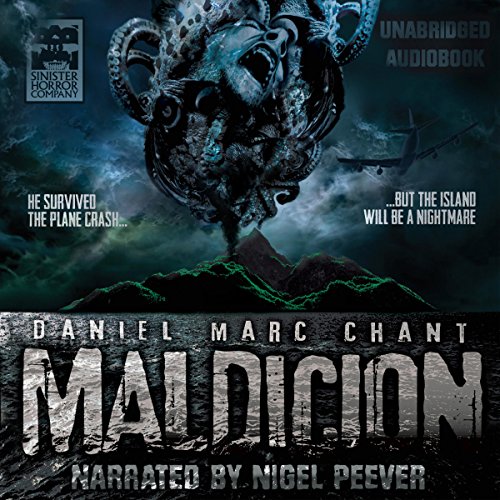 By: Daniel Marc Chant
Narrated by: Nigel Peever
Try for $0.00

Dexter LeGrasse thought he was lucky to be alive. He was wrong. The only survivor of a plane crash over the Atlantic, he finds himself washed up on an uninhabited island. Dazed, dehydrated and desperate to escape, he will have to use all his wits just to stay alive in a strange and unforgiving environment. But when he discovers an ancient ruin, he unwittingly unleashes an unstoppable evil and his nightmare truly begins. Primal, merciless and fueled by a burning hatred, the creature has a hunger that must be appeased. It hunts Dexter wherever he goes, driving him to the edge of his own sanity, and with time running out and no place left to hide it's escape...or die. A heart-pounding chase across lethal terrain, Maldición splices the rush of a survival thriller with the twisted creations of HP Lovecraft to create a man versus monster tale unlike any other.

What listeners say about Maldicion

Garbage. The narrator is the only redeeming factor

Bought this book on a whim- what a waste of a credit. The story, character development, plot are tired and poorly developed. The "monster" was far fetched and described within a paragraph or two. Little backstory to the village or why there was an island pyramid.

The narration was a treat though. Very well done, the only addition of suspense.

This was a great book!It was full of adventure and bad decisions.Nigel Peever was a wonderful narrator. I was given this free review copy audiobook at my request and have voluntarily left this review.'

I liked the story and the narrator did a good job.the only bad thing I have to say about the book is all the sound effects sometimes they were good but they got a little loud and hard to hear the story at times.

What a great tale. Unique and engaging on every level. The closest quick description is as the title says Castaway meets the Relic and man would I live to see Tom hanks take this role. A plane crash in the ocean, finding yourself the sole survivor on a weird island
That has not seen man’s touch in ages if ever. Finding a mysterious array of buildings with weird and dark lovecraftian carvings. Opening a doorway and releasing something to the island that should never have been allowed out. Will he be able to survive? Wilson isn’t here to help this time. Good luck. Really enjoyed this one a lot.
I was voluntarily provided this free review copy audiobook by the author, narrator or publisher

This is a different kind of story. Very entertaining and well written. The narrator does an awesome job.

This was fantastic, very well thought through short story. I was concerned about the sound effects at first but they were well placed and did good to enhance the story. My only complaint was that at a point or two the effect muffled a word or two. But this was superb :D

A brilliant tale of survival.

As a lifelong fan of Lovecraft's Yog Sothery, I'm always on the lookout for new books that bear a link to his work and so was eager to give this a go. the fact it's twinned with a tale of survival on a desert island just added to my excitement.

I admit that I do get annoyed with stories that chuck out names to try and concrete the link to Lovecraft's work but this isn't the case here. There are no eldritch tombs, ancient bas-reliefs or statues of winged celaphods but instead a story of a fight for survival against an ancient creature that feels, equally, as desperate for survival as our protagonist. Oh and I applaud the author for conjoining characters from two of my favourite Lovecraft works to create the star's name, Charles Dexter Ward from "The Case of Charles Dexter Ward" & Inspector Legrasse from "The Call of Cthulhu"; pure genius.

I found the story very engaging and the narrator Nigel had the perfect voice for this type of gothic tale. he perfectly encapsulated both the sanity shaken horror that Dexter suffered as well as the internal monologue as the protagonist worked through his plans and really brought the whole tale to life brilliantly. I have a list of favoured narrators and he has now been added as one who's work I need to delve into deeper.

Well worth a read, especially for those who enjoyed the recent horror movie Sweetheart which bears more than a passing resemblance to this (released 5 years prior) book.

Once again Nigel Peever delivers a gripping performance. The added sound effects and music compliment Nigel’s fantastic narration.
It’s one of those stories that leaves the listener wondering. Did it really happen or didn’t it?
If the creature was imprisoned for all those years then what did it eat or drink to survive?
There was mention of Dexter’s eating and drinking but no mention of him ever needing toilet facilities.

An enjoyable romp on a deserted island.

This was a very good action/monster story.The only survivor of a plane crash finds terror on his deserted island.As he panics he loses his supplies and his way. Nigel Peever does an awesome job with the narration.“I was voluntarily provided this free review copy audiobook by the author, narrator, or publisher.”

I thoroughly enjoyed this. I'd already read the book but heard great things about the narrator so thought I'd give myself a Halloween audio treat. The story really transports you and the narrator (plus sound effects) add to the atmosphere and creepiness of the whole thing. Well worth a listen.

Dexter LeGrasse thought he was lucky to be alive.
He was wrong.
The only survivor of a plane crash over the Atlantic, he finds himself washed up on an uninhabited island. Dazed, dehydrated and desperate to escape, he will have to use all his wits just to stay alive in a strange and unforgiving environment. But when he discovers an ancient ruin, he unwittingly unleashes an unstoppable evil and his nightmare truly begins.
Primal, merciless and fuelled by a burning hatred, the creature has a hunger that must be appeased. It hunts Dexter wherever he goes, driving him to the edge of his own sanity, and with time running out and no place left to hide it's escape... ...or die.

You find yourself marooned on an island after a devastating plane crash. Waiting for help to arrive, you decide to explore the island, finding a source of water and some sparse supplies of food. You might be able to survive until a rescue party finds you. Exploring deeper, you find evidence of primitive civilisation.
You are alone.
But you are not alone.

I thoroughly enjoyed Maldicion. It’s a simple story of a man alone on an island facing off against an ancient evil that is much bigger and stronger than he, with nothing but the contents of a few suitcases and his wits to fight it with.
At times, it feels like a choose your own survival adventure but without the choices (not a bad thing, because I used to love them) as it moves from dilemma to dilemma, although some of the discoveries feel a little convenient in order to advance the plot, the story is tight and keeps things interesting, which is ideal for the length.
The narration by Nigel Peevers is fantastic and his dramatically rising tones are suited for this story pefectly
Mixing up The Twilight Zone, parts of Robinson Crusoe, a dash of LOST, and a slice of Lovecraft mythos, Maldicion is a short read of creeping terror, that plunges the main character into a waking nightmare that they can’t wake up from.

A few issues that beggar belief

I have slightly mixed feelings about this book. As a quick read it fits the bill. The action scenes had enough excitement and there was suspense and drama in places.

Similar to another book I read not long ago the main issues I had were how the main character managed to find just what he needed, just when he needed it and yet the gun he found and used for hunting early on is never mentioned once the monster is released. That might have been a useful weapon but it appesars forgotten. Later on he is armed with a machete but I guess I missed the bit where he acquired that particular item. Even rewinding didn't explain where it came from. Luckily he also found tents and a trolley washed up on the shore (convenient) along with some rope though he later had to use vines to make rope as this seems to have disappeared like the rifle.

He also repeatedly says he has to be quiet to ensure the monster doesn't here him yet he hacks branches off several tree trunks on the beach. How does he do that without any noise? On a few occasions he discovers and sees things that he takes a few minutes to work out what they are while the reader knows immediately from a written description what they are. I mean, a desserted village, and a nearby area with lots of 6 foot long mounds in the earth: what could that possibly be, oh wait, it's a graveyard. Took him long enough.

After saying all that though it's a fun read/listen as long as you can suspend belief for a while.

Nigel Peever does a credible job with the narration but I really wish the production would cut out all the distracting sound effects and just read the story. The intro sounds at the start of each chapter are particularly irritating and far too loud through headphones or Bluetooth car/van speakers and some of the effects overpower the narration.

I received a free copy of this audiobook either from the author or a promotion or giveaway and am voluntarily writing an honest and unbiased review.