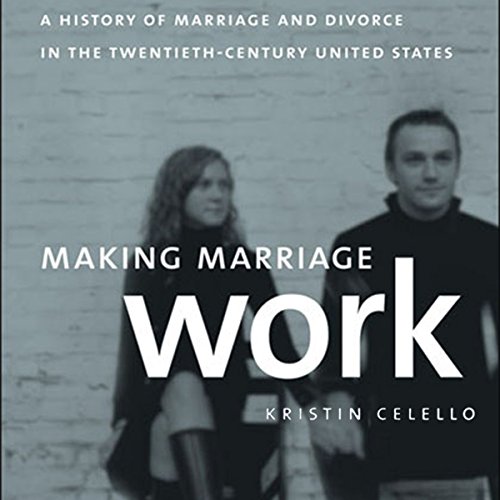 A History of Marriage and Divorce in the Twentieth Century United States
By: Kristin Celello
Narrated by: Tamara Marston
Length: 6 hrs and 47 mins
Categories: History, 20th Century
4.5 out of 5 stars 4.6 (5 ratings)

By the end of World War I, the skyrocketing divorce rate in the United States had generated a deep-seated anxiety about marriage. This fear drove middle-class couples to seek advice, both professional and popular, in order to strengthen their relationships. In Making Marriage Work, historian Kristin Celello offers an insightful and wide-ranging account of marriage and divorce in America in the 20th century, focusing on the development of the idea of marriage as "work." Throughout, Celello illuminates the interaction of marriage and divorce over the century and reveals how the idea that marriage requires work became part of Americans' collective consciousness.

The book that blows the lid off of the whole divorce “crisis.”

Remember Laura Kipnis’ "Love Polemic?" It was a diatribe of romance and monogamy. But "Making Marriage Work" is a great balance—tremendous research and investigation, but it’s not out there to judge you.

It has a wealth of information that will make you think about how the idea of marriage has evolved and been changed by political, environmental, religious, and cultural influences. This is a book that will be nodded to, for a long time to come.

"Work" is about how marriage has been defined not nearly so much by romance as by labor… a wonderfully provocative idea.