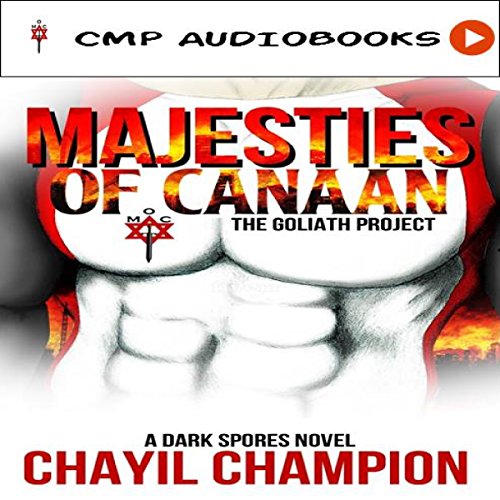 Majesties of Canaan: The Goliath Project

By: Chayil Champion
Narrated by: Josiah Bildner
Free with a 30-day trial

The next superhero adventure installment of the Dark Spores series from acclaimed author Chayil Champion.

The year is 2035. It's the dawn of a new era where power-hungry war generals are forming a new world order. The nation of Israel comes under attack by evil Tanwar Terah, a Syrian mastermind in science and politics. Through Terah, five countries are united in order to form The Caste Republic. Under his rule, The Caste Republic uses neoteric technology to create new weapons, genetically altered beasts, and human giants to put fear into the hearts of humanity.

But seven soldiers, led by Jewish-Italian lieutenant Peter Carmoni, are released among several military sleeper teams to locate Terah and destroy his campaign before it is too late. In their journey to find the evil dictator, they find themselves taking cover in a peculiar cave where they are introduced to Oramite, an element that changes their DNA and imbues them with new powers and abilities. Now it is up to them to learn how to hone their new talents and use it against their enemies in the biggest war the world has ever seen - or all will be lost.

What listeners say about Majesties of Canaan: The Goliath Project

Yes it is a creative form of Sci-fi that surprises on many levels.

The concept of unusual alliances and confederations in the future that would change the course of history.

Which character – as performed by Josiah Bildner – was your favorite?

Yes it draws you in on many levels the narrator keeps you interested as well.

The story and characters were not very entertaining. To make matters worse there was a lot of religion and I felt kike I was being preached to every other sentance while the description made no mention of this being a religious story. I couldn't finish it.

I was given this free review copy audio book at my request and have voluntarily left this review. This book's synopsis says it is book 2 of the Dark Spores series, but I couldn't find book 1... Anyway, this one seemed to stand alone just fine to me. It is very short but fast paced and fun. The narration is pretty good and it was over before I knew it. I'd recommend checking it out if you want a quick but fun listen.

I recieved this book free of charge for an honest review. it's a good short. team of operators get super powers from an angelic figure due to a demonic entity being a new big bad guy. it's short, to the point , and well played out. would recommend if you got a couple hours you can kill and enjoy comics.

If you love the YA superhero genre, this book is something that you'll want to add to your collection, and it seems to tie in nicely to a group of stories in the Dark Spores universe that have been written by several authors... Even though the book is labeled vol 2, it does just fine as a stand-alone, but watch out... you may find a new addiction! I liked Josiah Bridner's narration, from the very first moment.  He did a great job with this story!