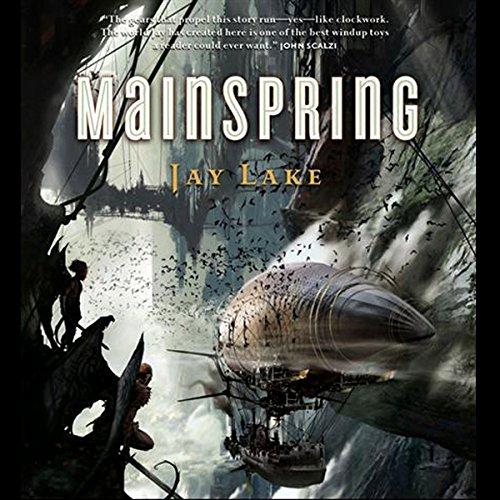 By: Jay Lake
Narrated by: William Dufris
Try for $0.00

Jay Lake's first trade novel is an astounding work of creation. Lake has envisioned a clockwork solar system, where the planets move in a vast system of gears around the lamp of the Sun. It is a universe where the hand of the Creator is visible to anyone who simply looks up into the sky and sees the track of the heavens, the wheels of the Moon, and the great Equitorial gears of the Earth itself.

Mainspring is the story of a young clockmaker's apprentice, who is visited by the Archangel Gabriel. He is told that he must take the Key Perilous and rewind the Mainspring of the Earth. It is running down, and disaster to the planet will ensue if it's not rewound. From innocence and ignorance to power and self-knowledge, the young man will make the long and perilous journey to the South Polar Axis to fulfill the commandment of his God.

"A dark, wild mix of machine and magic: an impressive debut novel from short story maestro Jay Lake." (Greg Bear)
"In Mainspring, Lake has created a grandiose, thoroughly engaging blasphemy. This book blends the best of nostalgic adventure fiction with a genuinely fresh voice and ideas. An instant steampunk classic." (Cory Doctorow)
"From the sweeping mechanisms of his clockwork world, down to the subtle movements of his characters, all drawn with a clockmaker's eye, Lake gives us a story both grand and intimate, smart and savvy...and a whole lot of fun to boot." (Hal Duncan)

What listeners say about Mainspring

This book was very enjoyable for the first half; the second half became a bit tedious. The Audio was well done, the story could have been better written.

The world the author creates on the northern hemisphere is vivid, imaginative, and full of intrigue. Earth is an enormous clockwork machine, part of a gigantic clockwork solar system, with a miles high wall running around the equator. The USA is still a part of the British Empire. It is a world full of zeppelins, horse drawn carts, and British troops.

The adventures of the main hero after an angel appears to him are interesting. Political, religious and social intrigues move the hero along his journey.

Until the Hero crosses over the Equatorial wall, then the author changes the style of the book. It changes from a quasi adventure story, to a man against nature survival story, and ends up a hero discovers he can do magic story.

For me, the tedious part was the authors repeated dialog about a scripture verse that is given to the Hero as He crosses the Equatorial wall. Over and over again the verse is repeated as the Hero trudges toward the South Pole, and the super clockwork spring that he’s trying to repair.

The conclusion was marginally satisfying, though I am still unsure of the main villain’s role in the wrap up.

The potential of the first half was not carried through to the end.

This book fell apart halfway through.

This book started out as something wonderful, new and exciting. About halfway through it fell completely apart and I had to force myself to finish it. I would happily buy this book a second time if the author would go back and re-edit/re-write it. The idea of the clockwork world, Angels, the bronze Christ, and the unfulfiled promise of some of the characters that were so skillfully drawn and then forgotten by the plot are still nagging my memory. The erotica, to me, had no place in this book and the golden tablets kept making me think about the very little I know about the LDS church. I won't say don't read Mainspring. I will say you may be disapointed.

How do you ruin a great short story? Turn it into a novel. Great premise (though not entirely original) that could have really gone somewhere if it had only gotten there sooner. For an author who made his name writing short stories, he really does yammer on in this novel. And the story's mainspring winds down about halfway through.

Lake should have deleted that third quarter of this book and put his energy into crafting a better ending. It wasn't that I didn't understand the ending, it was that I thought the ending was weak and hastily written. He spent long sections dwelling on pointless environmental detail during the adventure, but at the end, he summarizes major plot points in a single sentence.

Clearly it's a fable, probably an Intelligent Design fable... but I think that's just a stylistic choice to get off the hook for the weak logic. He alternates between reveling in his world building skills and describing things in detail, as if to say, "this could really work!" But when he gets too close to serious engineering questions, he leaves that vague and uses God to explain it. That's not Steampunk as some reviewers have said, that's Faithpunk. (Incidentally, anyone who knows anything about mechanical engineering will tell you that the gear he describes for the Earth's rotation would vibrate so horribly that not only would people near it go deaf, but the whole planet would also be shaken apart.)

Jay Lake comes off as very sharp and insightful in interviews. I wonder why there wasn't more of that in this book.

As for the Audio, the reader is good, but a little melodramatic, as if he himself is constantly in awe of the world that Lake has rendered.

I found the story hard to finish, but I did with little interest. About half way through I realized my interest was no longer being held. Pondering why I think it is due to a lack of personality in the characters, they do not invoke emotional response. I could have stopped listening, but finished to see if the ending was worthy. So-so.

Great premise. Too preachy for my tastes

What would have made Mainspring better?

I was very excited to start this listen. I am a huge fan of steam punk and the notion of a clockwork world made me tick.The first half proved true to my expectation, but the second half seemed to be more about the main character's steadfast adherence to god's will more than anything. It rang hollow to me. Certainly, a clockwork earth implies a designer, but I just didn't really appreciate how much He took over the story. Talk about dues ex machina.Combine that with a villain who only seems to me to appear when the author needs the plot advanced and, well, I was simply underwhelmed.

Mainspring is the story of Hathor Jacques, a young American orphan and horologist's apprentice, given the quest to find 'The Key Perilous' by the Archangel Gabriel. He must rewind the mainspring of the clockwork world before the globe halts on its brass tracks and brings about the end of everything.
Mainspring is both a 'Clockpunk' fantasy and an alternative history. The clockwork world is our world, but Hathor's America is still a colony of Britain and he and his compatriots are subjects of Queen Victoria. The world is divided by a great wall around the equator and the southern earth is a mystery.
Hathor's attempts to get help with his quest lead him to disenfranchisement, violence, imprisonment, the press gang (aboard one of He Majesty's Airships) and to an understanding of his world.
He meets enemies, comrades-in-arms, friends and lovers and untimately....
For me personally, there is a too much religion, and humanists receive short shrift, but in the context of the book (with an immanent or absent but otherwise 'real' deity) this works so it doesn't bother me too much.
You need to hear the book for yourself. I look forward to the sequel, which I hope will be on Audible soon after it is released.

This book left me rather cold and it was like slogging through quicksand to get all the way through to the end. Unless you count "The Difference Engine" by Gibson and Sterling, this is the first Steampunk book I have read and while I think the concept is interesting and full of potential this novel did not realize my hopes. There is some fairly graphic interspecies sex in the third act that hits you very suddenly. I know I have mentioned such things in other reviews and I am not a prude, but sometimes it seems that (much like in movies) such scenes are added in merely for the sake of sex and have nothing whatsoever to do with the progression of the story which was....boring.

I can see how the Catholic church hated this book. If your mind is open for adventure, sexuality, and (oh, no) a little bit of heresy, this book is for you!

The great idea of a clockwork earth was what excited me about this book in the beginning, and it lived up to its promise - at the beginning. But as the plot continued, the main character sunk a bit too deep in religion, and lurid congital encounters which i found to be in poor taste.
The idea of the book has a the potential for a great book and even a great saga.
However, the book itself, from middle to end, was rather disappointing.

A whining wimp copulates with a monkey, then he winds a clock. That's all there is to "Mainspring." It's nothing more than adolescent religious allegory with a steampunk veneer. This book is awful, just awful.

An interesting concept, with some curious and fun ideas. However, there are huge gaping plot holes and the author is constantly asking huge leaps of faith from the reader. I lost count of the number of times the protagonist "knew" something without any apparent evidence, or the number of times he solved his problems through yelling prayers. Read China Mieville instead.