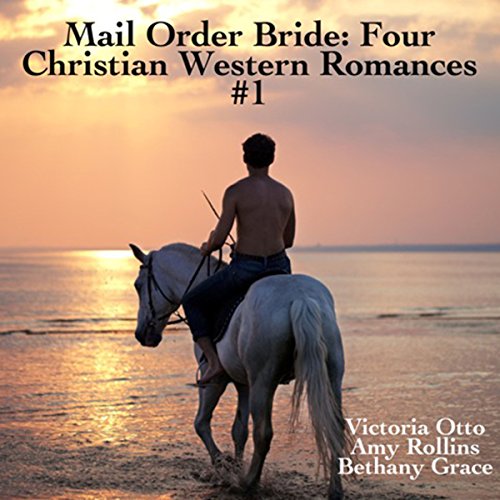 By: Victoria Otto,Amy Rollins
Narrated by: Joe Smith
Free with a 30-day trial

Mail Order Bride: Jasmine's Lonely Cowboy, is an emotional story about a lonely man with children who sends away for a mail order bride, and in return, gets so much more than he expected.

Mail Order Bride: Sent by God to the California Cowboy, is about a young woman in New York City who has fallen onto hard times after being released from the orphanage she'd been in for a majority of her life. Two kind women take her into a halfway house, but there is reason for her to leave New York immediately. The only way the women feel they can keep her safe is to ship her off to California, where their nephew, they tell her, needs a good housekeeper and cook for his ranch. When she meets Seth, she quickly learns that his understanding of the situation is very different.

Mail Order Bride: The Pastor's Bible Brings True Love and Marriage, is a romantic Western love story about a well-established pastor who seeks companionship and love from a good woman, who he hopes will love him back and he can make his wife. What arrived on the coach, sent by his aunt, is far different from that. She is stuck-up, an orphan, looks after her 10-year-old brother, and wants to take the pastor for every dollar she can. Through perseverance and love, and the bible, the pastor is able to turn all of their lives around.

Mail Order Bride: Emily Seeks out the Traveling Preacher for Love is the emotional story of a Southern woman, right before the Civil War, who is determined to find a childhood sweetheart in a traveling preacher. When he told her that his life was being an evangelist and that traveling across the country wasn't exactly a good life for a Southern lady, she told him that she wanted to join him in his ministry as she had attended school and learned all about preaching. That didn't suit him and he returned to Colorado.

Personally I think a woman narrator would have been better. And the last book was just plain weird. I almost wish I could "unhear" it. The other three were "ok".....not great but ok. I probably won't buy anymore in the series.