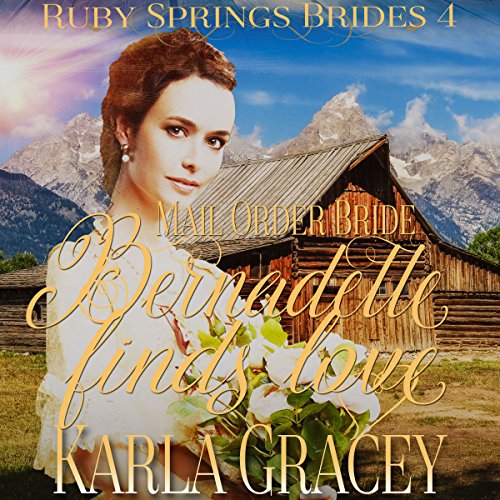 By: Karla Gracey
Narrated by: J. Scott Bennett
Try for $0.00

Bernadette Havering is a vivacious and independent woman. She knows her mind and never intends to let a man dictate what she should or should not be able to do. In a world where women having a job is frowned upon, she longs for a profession and wants to make history by becoming one of the very first women in the United States of America to gain a law license. But why should she give up a husband and family in order to do so? Can she truly have both?

Edward Grieve has worked hard. He has come from nothing and managed to gain an education, becoming a skilled veterinarian in great demand. But this is not the only thing that makes him unusual. He also believes passionately that women deserve more than they get from men, society, and the law of the land. But will he ever trust anyone enough to explain why?

This series keeps getting better and better. In this book we have Bernadette, a well educated woman who does an experiment to see if the men who write for a bride really would accept her as a lawyer. When Edward, the vet in Ruby Springs responds in a positive way, Bernadette is taken by surprise and finds herself intrigued by this man. Gracey continues to create a town of incredible character. Each couple has their own hurdles and personalities. This one really hits home with me, as a woman who wants the best of both worlds, professionally and at home. Edward proves there are men out there that welcome the well educated woman and believes in her ability to be both wife and working woman. For the times, this is unheard of! But is the beginning of what we have today.

J Scott Bennett continues to breathe wonderful life into these characters, giving them personality and charm.

Another great story on the Ruby Springs Series. This story has a good story line and holds your attention. Scott Bennett did a great job narraiting this book.

This book was great with its progressive characters and unique storyline. Looking forward to more.

Another enjoyable story starring strong women and the men who love them!! This book has women from many walks of life prove their fortitude and gumption!
Scott does a great job narrating as I’m learning. His voice and cadence really do fit this genre perfectly!!

Another sweet and short love story. I enjoyed the characters and always enjoy visiting Ruby Springs and a time that was much simpler than now. As always the narrator was also great. I would love to visit Ruby Springs again sometime. I am sure to listen or read these books again. I am sure others will enjoy them too.

This was such a sweet and caring story with two of the most endearing main characters that I have read about in a longtime.
The way Bernadette and Edward immediately took to each other while corresponding, each hoping for either a good friendship or more and the way they treated each other when they eventually met, these are some of the things I loved about this tale.
It was very interesting to see how love blossomed and how trust grew between them. I also loved that they only wanted the very best for each other, often going out of their way to make sure this happened.
This is definitely my best choice in the series though each book so far has been really good.
J. Scott Bennett has performed his usual professional and interesting voice narration of this story and has helped to make this a really enjoyable one which I am happy to recommend.
I requested and listened to the audiobook version and my review above is voluntary and unbiased.

J. Scott Bennett is perfect as narrator for these audible book's.

Now I really liked this one! Neither of them looking for a mate, then by an experiment, they meet and fall in love


Book 4 in this series. A short, sweet, clean, western mail order bride historical fiction. The author shows how difficult it was for a woman to become an educated professional, such as lawyer or doctor at that time in history.

The romance has it’s own twists and secrets byJ. Scott Bennett.

The narration was well done. The characters were well portrayed.