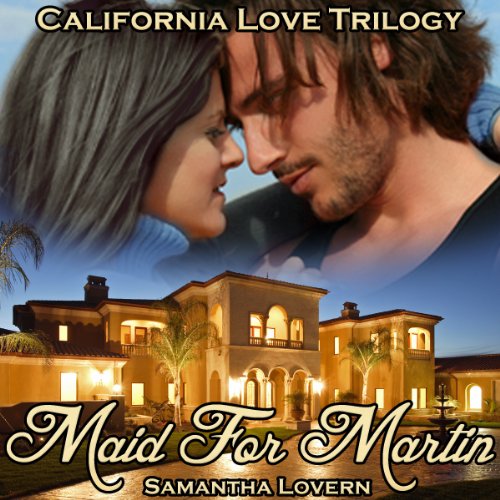 By: Samantha Lovern
Narrated by: Stephanie Bentley
Try for $0.00

Martin Taylor is having issues with his live-in-love, Celia Carson. She's not supporting his acting career and the upcoming Christmas party is stressing their relationship to a point of no return. On top of everything else he's falling for the maid, Randi Sanders. Martin's timing is always off, he never thinks things through, and to make matters worse, Randi has no idea he's really Martin Taylor. She thinks he's the limo driver. He hates to come forward with the truth because Randi's making him feel like he hasn't felt in years.

Randi Sanders has landed a position that will make missing the Christmas holiday, with her family, worth its weight in gold. It's a dream job, working as a live in maid, for the wealthy Hollywood star, Martin Taylor. She's been warned that the lady of the house is jealous and to stay away from Mr. Taylor, but no one said anything about the handsome limo driver.

When Martin and Celia's families start arriving Martin struggles to keep Randi from learning the truth. He may hide things for a while but soon someone will see through his antics and he'll be forced to face the truth he's been denying. Is Randi the real thing, or just an illusion of what he hopes to have someday? Is she a woman who wants Martin Taylor for the things his acting career can provide, or is she a woman that will want him for the man he has become?

What listeners say about Maid for Martin

I was hesitant to read Maid for Martin – only because I don’t typically read Romance novels, but I love this particular author’s innate Southern wit, and I’m a huge audiobook reader. When the opportunity to read the audiobook came, I dove in…wondering…

Within the first 20-30 minutes, I was intrigued. A couple of hours in, I wanted to thoroughly thwap the main characters across the head…which is my typical response to romance stories, but I was also already attached to the characters, especially the maid, Randi. I also really wanted to know how the author was going to resolve the central and side plots of the story.

Nicely done. …lots of gooshy, flirty scenarios and temptations for the romance readers, and plenty of conflicts and issues for the popular fiction fans. The author ties up the ending nicely while still leaving room to continue the primary love story and some pretty interesting side plots in a second book.

If you’re looking for steamy, graphic love scenes, you’ll need to look elsewhere. There’s nothing blatantly graphic in the novel, so it’s a pretty safe read for Christian and young readers. If you’re looking for a good, quality Lifetime/Hallmark movie-like novel, with Christian values (but not too too much preaching), Maid for Martin is an excellent choice.

About the Narration - The narrator is quite good. …definitely talented. The only issue with the audio production is the fairly frequent occurrence of audible breathy intakes. …could use some editing as sensitive audiophiles may be truly bothered by this, but most folks will overlook it once they get in to the story.

If the ending wouldn't have told me this was Samantha's first romance book, I wouldn't have believed it! This in a complex, detailed, finely written book! It was engaging with a mysterious edge to it. It's labeled Christian. And even though faith is talked about, none of the main characters are believers, but they do say a few prayers out of lack of other resources! It's definitely clean though and a very interesting plot! I'm looking forward to the next audio book in the series!!
I received a free copy of the audio book in exchange for an honest review!

I really enjoyed this sweet and sassy story. It was exactly what I was looking for in a listen. The pace was nice and steady from the beginning and the author's ability to tap into the very emotions of each character and translate the intensity of those emotions to the reader was impressive. I was able to follow the struggle Martin went through trying to do the right thing even when his emotions were screaming for him to follow after his attraction to someone other than the woman he lives with.
I liked the author's writing style and the firm clear message she set forth from the beginning.
Stephanie Bentley's performance was brilliant. Her voices were clear and very distinguishable.

This book was surprisingly good. I don't usually read these kind of 'romance' novels but it had enough intrigue and mystery, it kept my interest. I liked that it was full of clean moral fun romance for a change. I also loved the characters!

I really loved this story and the narration was first rate. Highly recommend this book.

Would you consider the audio edition of Maid for Martin to be better than the print version?

I haven't read the book so I do not know.

When Randi finds out who Martin is.

This is a good Christian fiction Christmas story. It is kinda like a Cinderella story. The master of the house falls in love with the maid. It was not what I was expecting it was so much more. I would recommend this book the narrator was good for this.

I received a copy of this from the author Thoughts and opinions expressed are mine alone.

This is an enjoyable Christian romance. I really liked the Cinderella aspect of the plot. Randi was easy to like and to relate to. It's a good Christmas story. I was worried about it possibly being a serial with a cliffhanger ending since it's part of a trilogy. I worried needlessly. It has a good HFN ending that is both a good conclusion to this story and the beginning of their relationship, which will be continued in the next books. I didn't feel unsatisfied at the end like I thought I would.

The narrator is decent. She has a nice voice that is pleasant to listen to, and she reads with feeling. I just didn't like how she over-enunciates some words, and I thought her male characters' voices were weak compared to other narrators I've heard.

I thought Maid for Martin was pretty good and I enjoyed listening to it.
The story was much longer than I thought it was going to be so that was a plus.
What a mess a lie can cause in ones life as Martin Taylor (actor) soon learns when the maid (Randy) he picks up thinks he's a limo driver and doesn't think to correct her but let's the keep going. When things start blowing up in Martin's life as he starts having to come up with more lies to cover the others especially when live in girlfriend starts getting the cold shoulder. As he starts wanting to straighten out his life because of Randy things need to be confronted and will Martin get the right girl in the end?