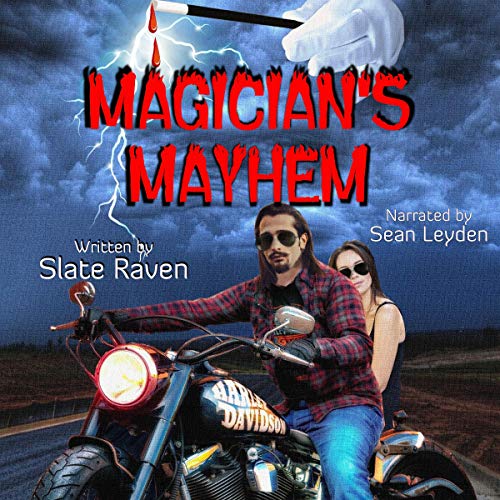 Something wicked this way comes! And it’s nothing that three friends would ever dream of having to encounter, while enjoying a simple reunion at the lake, one weekend.

Seems the entire United States of America is in a state of panic due to a surge of brutal killings by a ruthless and psychotic serial killer disguised as an old-style magician. He leaves his mark and revels in the devastating way he leaves his victims. It won’t be long before the magician strikes too close to home, slaughtering Bane Bloodworth’s family.

He’s no one to mess with, being a one-man tactical force. Bane’s got a reputation of being a tough-ass biker. He’s after revenge and taking his long-time friend Jessica with him. Jessica’s got some special talents of her own, and together, they set off on a fearless pursuit to find this crazed killer.

Tension mounts as local law enforcement are powerless against this evil force. Here, Bane and Jessica will be thrust into a forbidden zone where few would ever tread and stop at nothing to catch the killer.There’s no denying the chemistry between Bane and Jessica with working so close together.

Danger lurks at every corner as Bane and Jessica’s lives are now at stake. A kick-ass battle ensues as mortal humans go up against something that is not of this world.This paranormal thriller is a wild ride, so fasten your seat belts, listeners!

What listeners say about Magician's Mayhem

I definitely enjoyed this book. it was very entertaining. I did not expect the end. Bane was a very cool character. The narration was excellent as well.

I enjoyed this story immensely even though the ending was a bit lame for my taste. The amateur narration tried but didn't detract from it's entertainment value.

Although not my favorite genre and some parts were a bit too dark for me, I was fascinated by the story, mostly because of the author's writing style and characters. The plot is great, full of twists and surprising turns to keep the reader's attention. What I liked most is the deep and well-developed characters, protagonists and antagonists alike. The narrator's voice is clear and pleasant to listen to, however, at the end of some exciting or shocking parts, I wished he'd added a little pause to give me time to transition to the next paragraph.

This is my first and will not be my last book of Slate Raven. Loved it.
I found myself not wanting to stop listening. It is a book full of danger, excitement, suspense, and some shocking twists and turns that I did not see coming and made it so enjoyable. This book is well written, you will want to keep going to the end.