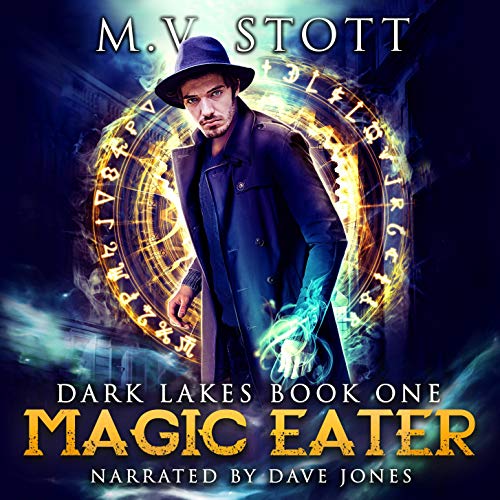 Joseph Lake doesn’t know who he is or where he came from, and the answer might just be the death of him.

The uncanny calls to him like a beacon, and he follows its signal wherever it leads, hoping that one day it will shine a light on who he really is. So far, the clues haven't added up to much, but now, a mad woman is stalking him, he’s tripping over dead bodies in the street, and he keeps having terrifying apocalyptic visions.

Can Joseph put the pieces together and figure out his identity? And if he does, will he be able to live with who he really is?

Mystery, scares, and fast-paced action collide in this thrilling urban fantasy series. Listen to Magic Eater now for a pause-resisting tale you cannot stop listening to!

What listeners say about Magic Eater

A fantastic listen. The Author has done a fantastic job at world building And character Development. This is also a fantastic Detective story with a sense of humor, the Narrator does a fantastic job as well. I highly recommend this series is fantastic
Shauna Joesten

Magic Eater is the first book in The Dark Lake series from Uncanny Kingdom and it certainly set a high bar in terms of storyline (which is outrageously fun) and characters (using the term colorful is beyond inadequate). It is set in the town of Keswick in the Lake District (northwest England) which is the proud home of The Cumberland Pencil Museum (for those who wish to know the complete history of the venerable pencil). While that sounds like a picturesque and charming English countryside setting, unfortunately for the main character, Joseph Lake, there are also some monstrous new denizens making their presence felt by leaving a trail of bloody corpses in their wake. Joe is a hospital janitor/handyman who is still grappling with the fact that something happened to him ten years ago which left him with no memories of his life prior to being found face down, naked except for a single sock, near a lake. Joe, much to his dismay, discovers he harbors some mystifying magical powers. This discovery sets him on the path to becoming a reluctant and somewhat unlikely hero in this fast-paced, action-filled, frequently hilarious quest to expose the horrifying plans of the newly arrived death-dealing monsters while, hopefully, discovering some portion of his lost past.

The audiobook version of this story was superbly narrated by Dave Jones who brought this delightful urban fantasy to life. The pace, the tone, the various characters, and the humor were brilliantly represented in his reading.

Bottom line: this is an awesome urban fantasy filled with snark, sarcasm and wit that made me laugh out loud, kept me entertained, and kindled a fervent desire to tag along on more adventures with Joe and his new posse of paranormal peacekeepers.

While I did purchase a copy of this book, I was given a copy of the audiobook by the author and I am voluntarily offering my honest and unbiased review.

There's a lot of bad luck going on for this bumbling nice guy. He's surrounded in mystery and makes an unbelievable over- underlord ? I can't wait to hear what happened to his memory! Next please?

Did she have to make the main character a complete idiot? He does nothing but bumble around, saying the most idiotic things, constantly. At first, it was funny, then it just got ridiculous to down right annoying.

A wonderfully dark, whitty tale of horror and hair

Disclaimer: I was provided a free copy of this book in exchange for an honest review.

This is my second foray into the Uncanny Kingdom and the second time I've been blown away by the adventure I've just been on.

Joseph Lake has no idea who he is as, 10 years ago, he awoke naked next to a lake in the lake district. Since then he has sought to find out who he is but thus far he hasn't had any success and so spends his time working as a janitor for a local hospital. From out of this simple beginning comes a tale of monsters, death, horror and an anthropomorphism fox (!?) as Joshua strives to remember who he is while trying to protect those around him from.

What begins as a search for missing cats soon balloons into a story chocked full of love, plot twists, car chases, horrific monsters and great hair.

Beautifully paced with a great balance of horror and mystery, interspersed with hilarious comedy and perfectly narrated by the wonderful Dave Jones this book was an absolute joy and I spent every free moment striving to hear what was going to happen just around the corner.

With regards to the humour, as with the last Uncanny Kingdom I read (Necessary Evil) the comedy is so natural and organic in how it's included it never breaks the drama, which is something that rarely works outside of books such as Terry Pratchett's Discworld series.

Again I can't sing the praises of this book any higher and to do so would result in me spoiling so many of the fantastic moments that occur so I will close in saying that you need to hop right in and experience this for yourself.

Mystery with a twist

Another hit in the Uncanny Kingdom.

Magic Eater has more humor than darkness, but the mystery is still there and this time we meet Joseph Lake, he is kinda stupid, but in a good fun way. And Eva made me laugh out loud so many times. I must say I adore this character and his story is wonderfully written. The pace is fast and the twist at the end broke my heart, I did not see it coming. There isn't a lot going on, but the authors have a way to tell the story that never let you bored.

Mr. Dave Jones has a variety of voices, his skills as a voice actor is incredible.

Thank you for the free promo code in exchange for a truthful review. This book was definitely not my normal listen but I really enjoyed it. The story line was a bit strange to start with but then it had me hooked, I think this had a lot to do with the fantastic voice of the narrator. If you like twitchy magic books you will like this book.

I like that the main character doesn't take things so serious even in the face of unbelievable things that would make anyone think they are completely losing it.

Stott does it again!

I loved this MC from the very first moment I heard him. Joseph Lake is funny, witty, naive, childlike, caring and totally obliviously the uncanny. As the story unfolded to reveal secret after secret I became completely invested in his world and the roles his friends and acquaintances played in it.
I found myself laughing out loud quite a few times (and received many strange looks from others for it) at things Joseph said or did.

And that fox...no spoilers... but, “All hail the Magic Eater!” This just cracks me up!

M. V. Stott has did it yet again. Magic, mixed with canny problems and a large side order of the Uncanny Kingdom.

I have to say, out of all the Uncanny Kingdom Audiobooks I have had the privilege of listening to, this is by far my favourite.

Narration:
Dave Jones was the perfect fit for the role of Joseph Lake. The accent, the emotion, the tone...it all painted a mental picture of just exactly who he was.
I have nothing negative to say about this narrator, quite the opposite. He was spot on with his voice acting and it was apparent he was enjoying the story just as much as I was.
Excellent!

Format: audiobook
Narrator: Dave Jones
In all honesty although I enjoyed this story, for me it did seem to take its time revealing, (or starting to reveal) Just who Joesph Lake is or was! It’s entertaining and fun and will have you hooked in not wanting to miss any detail.
Joesph Lake is a likeable character and Eva Familiar is one of a kind lol, the ending will definitely leave you reaching for the next book because you will absolutely want to know what led to that revelation.

Well, this is the first audiobook I have ever listened to. So I don’t know wether it was the book, the narrator or what. But I did not go for this like the other Uncanny books. Firstly like some of the other reviewers I thought it was a bit silly and being honest I didn’t think the narrator was the right choice. Still wouldn’t mind mind trying another audiobook to see the difference. Recommended.

Amazing book brought to life by the most fantastic narrator! Loved it from beginning to end. Can't wait for the next one!

There are no story spoilers in this review and I should tell you that I’m a huge Uncanny Kingdom fan (it’s a little like being a huge Terry Pratchett or Jim Butcher fan only with a new set of amazing writers!)
I had already read the kindle version of this book before laying hands on the Audible book and I can honestly say that this is one of the few times that the voice in my ear sounded EXACTLY like the voice in my head did when I read the book. Kudos for that Mr Dave Jones. You kept the pace and cadence that the book had brilliantly.
The book itself has, as with all the Uncanny Kingdom books, an antihero who (bless his heart) doesn’t actually realise he’s a hero and is therefore all the more heroic for it.
Word of warning - If you listen to this book on your commute; make sure to tuck yourself into a corner where no one can hear your muffled giggles because believe me... you will be giggling😊

Again, another fabulous story from the uncanny crew. Love the narrator and the storyline kept me listening. Thanks guys, look forward to your next Audible version.