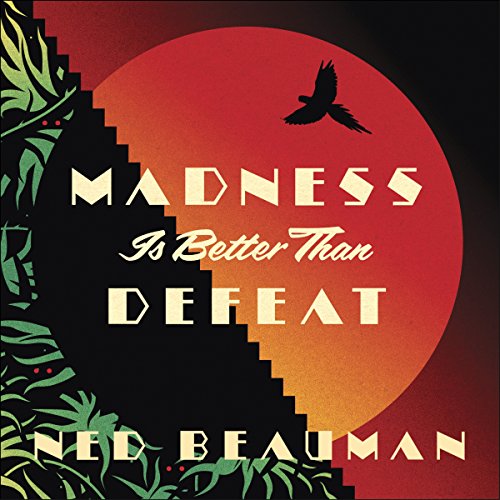 Madness Is Better than Defeat

By: Ned Beauman
Narrated by: Eric Meyers
Try for $0.00

In 1938, two rival expeditions set off for a lost Mayan temple in the jungles of Honduras, one intending to shoot a screwball comedy on location there, the other intending to disassemble it and ship it back to New York.

A seemingly endless stalemate ensues, and 20 years later, when a rogue CIA agent learns that both expeditions are still out in the wilderness, he embarks on a mission to exploit the temple as a geopolitical pawn. But the mission hurtles towards disaster when he discovers that the temple is the locus of grander conspiracies than anyone could have guessed.

What listeners say about Madness Is Better than Defeat

Absolutely loved this utterly mad and deeply involving take on a 1930s screwball comedy. The plot is broad, far broader than mentioned in the succinct blurb, but most of what takes place centres around two groups of people arriving at a hidden temple in Honduras and staying there for over twenty years.

The book jumps around in a non-linear fashion and the narrator changes between numerous characters throughout. You might be confused for portions of the story but eventually all loose ends are tied up. It's an ambitious book that evidently leans heavily on Herzog and Coppola's forays into the jungle as well as the 1930s Tarzan movie that had so many problems shooting on location.

Ultimately, in terms of a book that really appealed to me - from humour, setting, that front cover! - this was pretty much perfect. I loved it and it has some superb narration but your mileage may vary if you're not a fan of the madcap caper. That said, if you like Coen brothers films or silverscreen success of yesteryear like The Philadelphia Story or It Happened One Night, then this should be right up your alley.