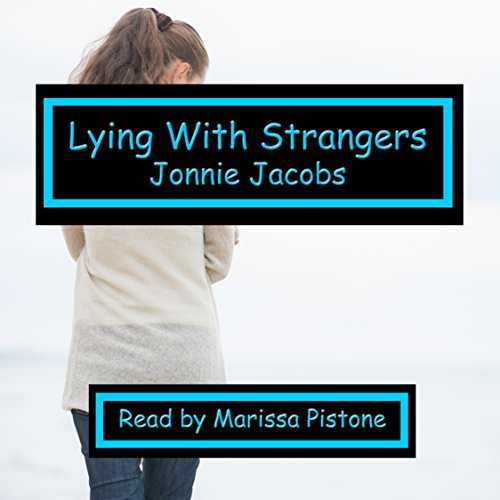 By: Jonnie Jacobs
Narrated by: Marissa Pistone
Try for $0.00

Raised in foster homes, 18-year-old Chloe Henderson hopes for a sunnier future with boyfriend Trace Rodriguez and the child they're expecting. On what Chloe thinks is a Sunday outing, Trace pulls up to a convenience store in a rundown San Francisco neighborhood. Chloe is horrified when he robs the store and kills the clerk and a customer, ADA Roy Walker. Afraid of losing the one person who's ever loved her, Chloe helps Trace escape and becomes an accomplice to an appalling crime.

Reeling from her husband's death, Dianna Walker is shocked to discover the lies and dark secrets he's kept from her. When her young son plows into Chloe with his bike, the women's lives become entwined in ways neither of them could have imagined.

Joel Richards, an enthusiastic young journalist covering recent developments in an old murder, has his own reasons for being interested in Roy Walker, and in Chloe.

What listeners say about Lying with Strangers

I love this book both the story and the narrator were wonderful. I can't wait to read more by Jonnie Jacobs. I received this audiobook for free with the understanding that I would give an honest review.

The Narrator is Essential

What made the experience of listening to Lying with Strangers the most enjoyable?

The story was good, but it would be better as a book and not having to listen to the constant swallowing of the narrator.

What was one of the most memorable moments of Lying with Strangers?

You can hear the narrator swallow about every two seconds. It's awful!

Would you consider the audio edition of Lying with Strangers to be better than the print version?

It did at times. Long buried secrets are being exposed. People are not who they seem. Enemies are friends and friends are enemies.

Which character – as performed by Marissa Pistone – was your favorite?

Dianna, she was an ethical strong person loving and forgiving.

I wanted to scream at Chloe "GROW UP GIRL!!" She was whinny, child like and naive. Yet she was also moral, kind and a survivor who cared about others despite her neglectful and abusive childhood. In contrast Emily was just as immature in a very spoiled, mean and and snobbish way. I wanted to strangle her. Then Len was the worst sort of scum bag. A smug and arrogant sociopathic manipulator and worse. Chloe and Emily both mature with Chloe making wiser decisions and Emily becoming less narcissistic. Len is evil and a lost cause.

Evey book I've read/listened to by Jonnie Jacobs has been a winner. His books are well written with complex tangled plots and lots of surprises. Both of Emily's and Chloe's immature behaviors are a bit grating. Dianna should be nominated for sainthood for keeping her cool with her daughter Emily. The villain and blackmailer was very obvious to me early on in the story. Both Chloe's work mate Velma and the reporter Joel Richards bring a healthy adult balance to the story. Chloe's scum bag boy friend Trace is a lower class version of Len. Both of them are from the same mold.

Besides the suspense and mystery the book had coming of age elements, and deep complex character interactions. This is indeed a very good well written and performed book.

I hated Jonnie Jacobs book Motion to Dismiss. So i had no trust that this was going to be good. Lying with Strangers is a good book. I was so happy about this book, because it is a really good book. I can say with passion: Welcome back Jonnie! I hope this is the first in many good books from your side!

Marissa Pistone is a new women for me, and a that means a new voice! 10 hrs and 28 mins with her makes me happy! She is a bit laking in voice work to get full pot, or full score, but 4 out of 5 is not a bad score so people don't get upset! I think there is some to go on, but close to a 4,5!

This story was a fabulous dramatic mystery, created by Jonnie Jacobs, that had me guessing at the truth the entire time. I truly enjoyed the characters, the twists and turns, and how it resolved itself in the end. I enjoyed the unique plot and was impressed throughout.

Unfortunately the narration hurt the story telling due to its terrible post editing. Marissa Pistone did a fine job with all the characters, emotions, and pacing. However, the amount of mouth noises, licking of lips, lip smacks, and awkward breath pauses took me out of the story too many times to count. I give 3 stars for a good narration but a 1 star for production quality.

Overall it's a great story and I recommend it being physically read.

This audiobook was given to me in exchange for an honest review.