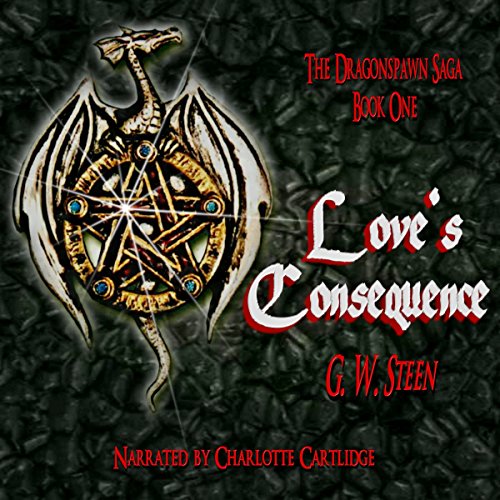 The Dragonspawn Saga - Book One (of Five)

Castles, magic, and sorcery abound in this fantasy tale of a young woman, Eryka Danek, as she sets out on a journey in search of her destiny. She finds herself alone when a strange storm erupts, destroying her village and killing all its inhabitants, including her parents.

The dark lord, Alazais Moorlange, upon hearing in his mind the reciting of a sacred rune ritual, conjures a vision and sees his next conquest. Summoning his ageless, shape-shifting abilities, the old wizard is transformed into a young mage. His intent: to deceive and capture his newest victim.

Eryka unwittingly falls under the enchanter's spell, but it is not strong enough to thwart an intervention by a vengeful ghost. Will Alazais' powers rule, enabling him to keep this innocent? Or will his nemesis, Hendrik Naguum, save Eryka from suffering the same fate as the vile wizard's wife?

What listeners say about Love's Consequence

The first story is about a young girl who is orphaned and then deceived by a wizard. No spoilers here, but if you like magic spells and evil sorcerers vs hero then don’t miss out on this one.

It strikes me that there doesn't seem to be a explanation for the stars that are given. So I thought I'd start giving my take on it.
1 horrible no redeeming qualities.
2 there are redeeming qualities.
3 good worth reading, or well written but not my cup of tea.
4 great but there's something off.
5 loved it.

A good book I look forward to the rest
The narrative is a bit over acted. Hopefully it will get better as the series progresses.

I've recently had several conversations with people that have said that one of the things they'd like to see in a review is if I'd read/listen to it again. So I'm now adding that to my reviews.
No I don't think I'll listen again.

This book followed the typical hero’s journey where we meet our protagonist at a young age, and she is taught the magic that she’ll need throughout her life. When her sixteenth birthday comes, it becomes time for her to leave the village. When it is destroyed by an evil wizard, she is set out on a quest.

I loved the worldbuilding in the story and the construction of the MC’s personality. The only thing I didn’t really care for in the book was the thick romance at the beginning. It was just a bit too sweet for my taste.

Good start for a New Series

I love fantasy books and this one has a fun storyline and a lot of potential. I look forward to the next book to see where the story goes. The premise of the story is of a young girl, Eryka, who is raised and taught to use magic. When she turns 16 her parents prepare her for a journey to find her destiny. Shortly after she leaves Eryka witnesses her village being destroyed by a storm that was controlled by an evil wizard, and realizes her parents are dead and she is now alone. She finds herself under a dark spell and has to try to break free and escape. I had some issues getting into it in the beginning because I felt the romance was a bit overdone and on the sappy side, with the brief telling of her parent's romance, and maybe that was due to the inflection in the narrator's voice. I do think my issues were more with the narrator than the story, she has a nice voice and isn't hard to listen to but I think she tried a bit too hard in spots on the acting so there were scenes that then felt a bit overdone. The story did get better though and I found myself enjoying it. I do think there were also parts of the story that could have been more developed, there were places that just jump ahead that really could have added to make it richer. Being about three and a half hours long it's a pretty quick book to listen to. I would recommend this if you enjoy the fantasy romance genre of books.

such a good beginning

Exciting beginning to a new series, soon to be available on Audible. A tale of good vs. evil set against the background of fantasy's most infamous characters...wizards, dragons and magic.