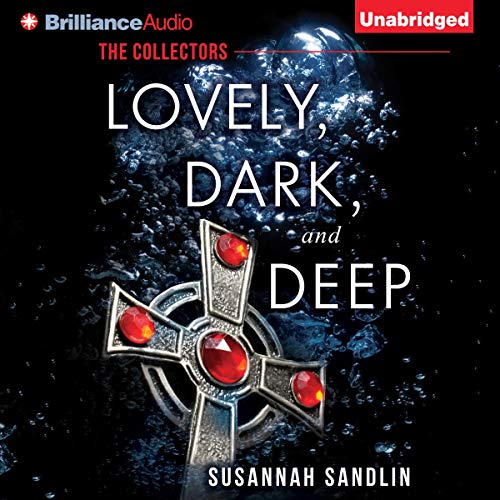 By: Susannah Sandlin
Narrated by: Amy McFadden
Try for $0.00

From award-winning author Susannah Sandlin comes a heart-pounding romantic thriller that pits a quick-witted scientist and a scarred ex–combat diver against a ruthless billionaire treasure hunter with ties to the White House.

When biologist Gillian Campbell makes an offhand comment about a family curse during a TV interview, she has no idea what her words will set in motion. Within days, Gillian finds herself at the mercy of a member of the C7, a secretive international group of power brokers with a dangerous game: competing to find the world’s most elusive treasures, no matter the cost, in money or in lives. To save her family, Gillian teams up with Shane Burke, a former elite diver who’s lost his way, navigating the brutal "death coast" of the North Atlantic to find what the collector seeks: the legendary Ruby Cross of the Knights Templar, stolen by Gillian’s ancestor and lost at sea 400 years ago.

What listeners say about Lovely, Dark, and Deep

Great storyline with suspense, mystery, romance and comedy rolled into one. Love this author and narration was excellent! Can't wait to listen to the next one.

Such a great story! From beginning to end I couldn't turn the pages fast enough. But how Shane and Gillian could let one of the bad guys go is beyond me. And speaking of Shane and Gillian they were were a wonderful pair. Loved Jagger and Charlie. Hated Tex, Son of Tex and Weston Flynn. A really great read.

As to the author: WOW! All the voices were individual and distinct. Ms. McFadden just keeps getting better and better. Absolutely loved her voice for Uncle Charlie.
Perfect job, Ms. McFadden

This book is a stand alone mystery/romance with an HEA.

This story begins with a mysterious man playing a treasure hunt "game". The person who instigated the hunt is a widowed alligator wrangler named Gillian. She has a sad past that is hinted at. Gillian is forced to find a treasure rumored to have been lost by one of her ancestors in the 1700's, off of a Canadian coast. Now we meet down on his luck captain-for-hire, Shane. Shane comes with some colorful characters who each play roles on the story, especially Jagger and Harley.

Gillian lets Shane know the truth about this mission. People she cares about are being threatened unless she gets the treasure within 30 days. Shane begins to be threatened as well and the 2 start out on the adventure. I had a hard time with the time line. Gillian, Shane and the boat are in the Florida Keys. They have to research where this alleged boat sunk, retrofit and update a boat and travel to Canada, not to mention finding a gold cross in the ocean.

The ease with which everything falls into place is the only thing I didn't buy. The romance and discussion into the respective tragic pasts was very moving. The quirky friends and even the "Demon dog" Tank, were quite funny. The easy ending did not mesh with the twisted game that began the story in the first place.
Although I felt there were some issues with the story @$7.34 it is a good book at a great price.
This book is for an adult audience due to mild sexual content.

I like Amy McFadden and she was good for most parts of the narration but she was bit over the top with some of her charaters.

Loved the characters, a great plot and a wonderful reader. Just brilliant! If there is a book 2, and I hope there is, I’m grabbing it ASAP.

Great start to a new series.

just right in every way. not too dark, not too fluffy. narration great. really enjoyed this one.

This was a great story, heavy on the intrigue, light on the romance & the sex was just a suggestion; nothing explicit. Just the way I like it, lol. Thumbs up!

I couldn't get past the narration. Also, although I enjoyed her other series, the damsel in peril for no good reason really didn't do it for me. Threats to family and children within 10 minutes. Evil, smarmy bad guys.

When scientist Gillian Campbell mentions a family curse live on TV and a connection to a legendary Knights Templar Relic she has no idea of the havoc it will cause her life. Or that she has put herself squarely in the sights of a powerful morally corrupt man and a group of rich collectors. Men who will stop at nothing to get what they want including murder.

So begins a deadly game of chess. A game that could end in her getting everything she wants in life or could end in her losing it all, including her life and the lives of the people she cares for.

Thankfully she will have help on her underwater treasure hunt. Help that comes in the delicious form of fearless ex combat diver Shane Burke and his quirky friends.

I loved listening to this action packed romantic suspense featuring engaging characters, enough sexual heat to set my kindle afire and the cutest teddy bear of a dog. What's not to like?