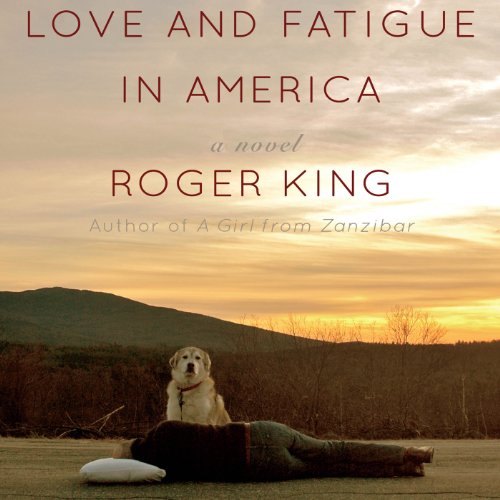 Love and Fatigue in America

By: Roger King
Narrated by: Graeme Malcolm
Try for $0.00

Love and Fatigue in America records an Englishman’s decade-long journey through his newly adopted country in the company of a mystifying illness and a charismatic dog.

When he receives an unexpected invitation from an unfamiliar American university, he embraces it as a triumphant new beginning. Instead, on arrival, he is stricken with a persistent inability to stand up or think straight, and things quickly go wrong. Diagnosed with ME disease - chronic fatigue syndrome - he moves restlessly from state to state, woman to woman, and eccentric doctor to eccentric doctor, in a search for a love and a life suited to his new condition. The journey is simultaneously brave, absurd, and instructive.

Finding himself prostrate on beds and couches from Los Alamos to Albany, he hears the intimate stories offered by those he encounters - their histories, hurts, and hopes - and from these fragments an unsentimental map emerges of the inner life of a nation. Disability has shifted his interest in America from measuring its opportunities to taking the measure of its humanity. Forced to consider for himself the meaning of a healthy life and how best to nurture it, he incidentally delivers a report on the health of a country.

By turns insightful, comic, affecting, and profound, Roger King’s Love and Fatigue in America briskly compresses an illness, a nation, and an era through masterly blending of literary forms. In a work that defies categorization, and never loses its pace or poise, the debilitated narrator is, ironically, the most lively and fully awake figure in the book.

What listeners say about Love and Fatigue in America

Roger King was an English professor, who, filled with a bit of hubris, accepted a prestigious appointment in the US, and got ready to start what he thought would be his new sex and romance-filled, ego-stoking adventure.

To his shock, his health crashed, and no one could explain what the hell had happened to him. He'd developed Chronic Fatigue Syndrome, or ME.

Love and Fatigue in America is his fictionalized account of his experience.

Instead of teaching college students, the nameless narrator ends up wandering state to state, and woman to woman, sleeping on strangers' couches, the only constant in his life, his dog.

His insights into masculinity, sexuality, and the American healthcare system, in the face of the mysteries and incapacities of ME, are startling.

His poetic, satiric epilogue, "The Benefits of Illness," should be made into a poster and widely wheat-pasted at every doctor's office!

Graeme Malcom is a fantastic narrator, and I was glad to be with him for the whole trip.