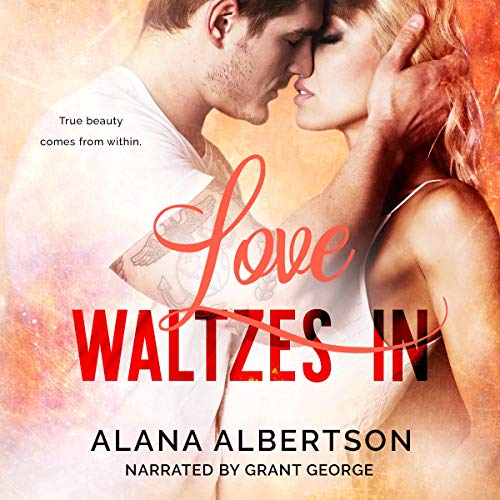 By: Alana Albertson
Narrated by: Grant George for EEC International
Try for $0.00

To her millions of fans, ballroom champion Selena Marcil seems to have the perfect life: a great dance partner, a hit reality show, and celebrity perks. But underneath the glamorous ball gowns, Selena longs to find someone to share her life with when the stage lights dim.

Selena's childhood sweetheart, Bret Lord, hung up his dance shoes after winning two national titles with her as a teenager, and enlisted in the United States Marine Corps. He never saw his former fiance again, except on television and on the cover of men's magazines. Ten years and three deployments later, Bret gets an offer to audition for Selena's dance show. When the Marine Corps gives him temporary leave to appear on the series, Bret can't refuse the quick cash that will enable him to provide financially for the widow of his buddy, even if it does mean coming face to face with his past.

When Bret shows up at her national championship, Selena is shocked. For years she searched for him to no avail. After spending time with Bret, Selena realizes despite their past romance, they have no future. He has no desire to live under a spotlight and she has no desire to leave it. Can Selena and Bret recognize when Love Waltzes In?

What listeners say about Love Waltzes In

Would you listen to Love Waltzes In again? Why?

I would absolutely listen to Love Waltzes In again. The voice actor perfectly complimented the story telling.

My favorite character was Bret. True to himself, stubborn, talented, strong. Everything you want in a leading man.

Have you listened to any of Grant George for EEC International’s other performances before? How does this one compare?

I have not, though I imagine his others are just as amazing.

I did, I couldn't stop listening, especially about the dance world. Absolutely fascinating!

I’ve read this story as an ebook, in paperback, and now audiobook & have loved it each and every time. I must say that the narrator here serves to enhance the already remarkable tale. His voice draws you in and is next to impossible to ignore.

I love how Albertson works the histories and stories behind all of the dances right into the story. They fit perfectly with the stories and introduce each new section brilliantly. They keep you captivated and introduce you into the different aspects of the lives of these dancers. Albertson melds this with her straightforward yet captivatingly realistic storytelling to bring you a world that you won’t be able to walk away from. By the end you find yourself completely immersed in a world that you’d never experienced and relating to it in a way that tugs you further and further into the world of competitive dance.

Albertson makes you giggle with the realism in each character’s reactions. Everyone is so realistically portrayed based on who they are and where they came from. That said, no two characters’ reactions are ever the same because each of the characters are so unique. Each and every one stands out in the crowd. It was so nice to see such a large and diverse cast of strong characters.

Overall, this was a one of a kind novel that captured my heart and my imagination. I honestly can’t wait to dig into more stories in this series and hope that the narrator returns alongside the characters in the next instalment.

If your looking for a easy read...this is your book. It has enough mainstream in it to keep it moving and the storyline is quant but not entirely believable.

If you could sum up Love Waltzes In in three words, what would they be?

Good but just fell short for me.

Would you recommend Love Waltzes In to your friends? Why or why not?

The premise of the story had a lot of potential but for me it just didn't quite hit the mark, it shouldn't stop someone else from enjoying it. Good but not great.

What about Grant George for EEC International’s performance did you like?

The only really extreme reaction I had was to the sometimes cringe worthy over use of 'ockerisms' if your not Australian you won't know what I mean but at times it was enough to make or beloved Steve Irwin be embarrassed.

Firstly I have really enjoyed everything that I have previously read by this author and while I did enjoy it, for me, the story fell a little short by comparison to her other books. It was interestingly set within the Ballroom dancing world . Throw in an ex you've never really stopped loving, an egotistical dance partner, a secret that could break everything, all in the midst of filming a reality show. It has all the makings of a really good story but it just fell a little short. I didn't really like either the H of h a lot of the time. I can't say too much without giving anything away but seriously I get that things happened that maybe you should have been told about before now but @18 who makes great decisions? Cut the girl some slack and h, stop thinking it's OK that H blames you and says so much stuff that can never be unsaid, it's not OK and he never really says he's sorry for all of that. Possibly he doesn't think he needs to apologise, it was after all your fault. Please, you were 18 anf still being guided by people that should have had your best interests at heart. The other thing that really was cringe worthy was Benny and his over the top 'ockerisms' and if you're not Australian you probably won't get what that means. We do not really talk like that, 1 or 2 Ozzie sayings would have been fine to let the reader believe he was Australian but to keep throwing them around willy nilly was just OTT. Alana I believe you are a great author but this just didn't do it for me like your other books. It will not, however, put me off buying more of your books, you're just that good. ps I did like the ballroom dancing throughout the story though.

Are you a big fan of Dancing with the Stars? Or Ballroom in general? Then this book is for you. Bret a Marine and former amateur dancer is given an opportunity to compete to raise money for a fallen soliders family. Selena the professional and champion on Dancing Under the Stars is craving more than what she has. Their past is thrusted back and they are forced to work together.

I enjoyed this book. I really felt like I was behind the scenes of the show. The characters were likeable. There was a couple of unanswered questions for me with the story though.

Dancer to marine back to dancer

I listened to Love Waltzes In after I had read Sway & found the different characters in the books very similar as the storylines are.
Though they were similar, the outcome & why they initially separated were different .
It was a likeable read 😘