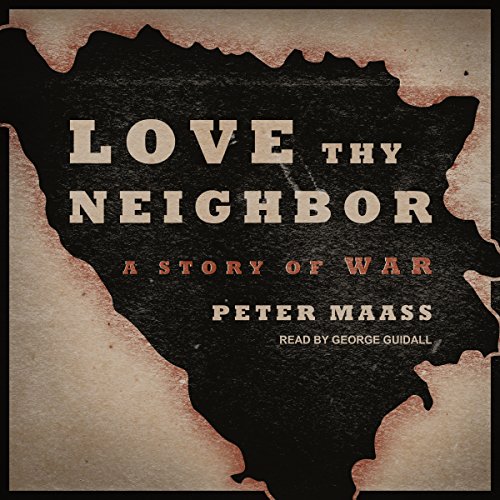 By: Peter Maass
Narrated by: George Guidall
Try for $0.00

Winner of the Los Angeles Times Book Prize Peter Maass went to the Balkans as a reporter at the height of the nightmarish war there, but this audiobook is not traditional war reportage.

Maass examines how an ordinary Serb could wake up one morning and shoot his neighbor, once a friend - then rape that neighbor's wife. He conveys the desperation that makes a Muslim beg the United States to bomb his own city in order to end the misery. And Maass does not falter at the spectacle of U.N. soldiers shining searchlights on fleeing refugees - who are promptly gunned down by snipers waiting in the darkness.

Love Thy Neighbor gives us an unflinching vision of a late-20th-century hell that is also a scathing inquiry into the worst extremes of human nature. Like Michael Herr's Dispatches, it is an utterly gripping audiobook that will move and instruct us for years to come.

What listeners say about Love Thy Neighbor

I've never reviewed an audio book or any book for that matter. This is my forth attempt and no matter what, I'm not deleting and starting a fifth. This story is a gut punch of reality that everyone should hear. I had family over there during the war and I never knew how bad it was or even asked for that matter. This story is not a history lesson written by the winning side. It's more like listening to a man who's actually been to hell as an observer, spoken to the devil, witnessed the horror and lived to tell about it. I couldn't put it down. I think that's all I can say.

An intimate but biased view

"I nodded my head, said I was grateful for their interest in my work, and waited for them to berate me for being biased, anti-Serb… a liar." (Chapter 10) The book gives a vivid and intimate view of the Bosnian war, but is marred by Maass’ bias against the ethnic Serbs. The picture painted is very much one-sided. Maass exonerates both the Turkish and Titoist rule from contributing to the conflict, and blames the rise of nationalism. This makes his depiction of the region as a model of pluralism somewhat comical… where did the nationalism come from? It seems the hows and whys are best left to other authors. Where book shines is capturing the street-level absurdities of the war. Former neighbors taunting each other over radios, soldiers singing Sinatra tunes edited into promoting rape, and students taking off weekends to squeeze shots off at Bosniaks… only to return to school on Monday. It’s gauchely surreal.

Is not completely story.

Really good book, but he didn’t say much about Croatia and Kosovo almost nothing. I don’t why.

The correct title should be ",,Why the UN has demonstrated itself, yet again, to be a totally worthless institution that should be defunded and disbanded" immediately. AS a sub title Bill Clinton is a lying schite who presided over 2 mass genocides and did absolutely nothing. The French English, and in truth, all Europe let him. Oh, and Obama leaned his lessons on appeasement well on how to enable tyrants while pretending he did not and the American public let them by pretending the schites were not brazen liars. I always thought I might not mind hell..there could be some fun folks there...but the assured presence of Clinton, Owens and Major, Mitterrand the entire body or UN "diplomats" has made me turn over a new leaf. Even George Guidall superb reading can not stop this form being a stomach turning story. I wonder how much of the current Moslem fundamentalism mess might find its earliest roots in the Bosnian tragedy.

I have spent a lot of time in Serbia for work but this book gave me a new appreciation for the complexities and horrors of the turbulent post-Tito years. The writing was phenomenal, and the narration for the audio book was so good I want to listen to whatever else the reader reads just because he was so enjoyable.

This book is indulgent and overstated from the get. Coming from a reputable, experienced author (at the time of writing), this could be considered charming but would still be a distraction. Coming from a first time author, his voice raises eyebrows. What I’m saying is this guy buys into his own flourishes. Makes you start rolling your eyes on an otherwise gravely serious story

What a fantastic story, so excellently written by a true master. The listening of Love Thy Neighbor is coinciding with a Balkan trip and has exponentially increased my experience!

The chapters labeled in audible for this book are wildly incorrect. “Chapter 5” is technically the start of chapter 2... I don’t know if this can be fixed.

Wonderfully written, and the narrator was the very best I have heard! I don't believe the author was a bit biased as some have said. Many interviews from both the Serbs, the Bosnians and others. It was quite clear to me.

History that needs to be heard

Good book, hard at times to listen threw due to the treatment of the people. Hard to believe that this happened. Very enlightening a conflict that needs taught in schools. Another time when history repeats itself, when the politicians in power and the UN dropped the ball.