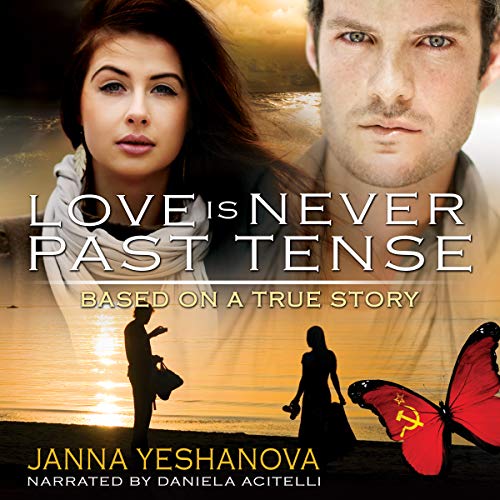 By: Janna Yeshanova
Narrated by: Daniela Acitelli
Try for $0.00

How could he possibly know that she, a complete stranger, would inexplicably affect his life and be with him forever, whether she was at his side or not? Drawn together in Russia on a romantic Black Sea beach, Serge and Janna fall headlong in love and rush into marriage. Their divorce months later leads to years of "if only".

Pressured apart by family and fate, they repeatedly cross paths, never quite reconnecting, never quite letting go. Changes in the world, their careers, and their lives, cause them to surrender to external influences. As they build separate lives and families, their destinies, shaped by post-Soviet political intrigue, collapse into a struggle for their very survival and dreams of a better life.

A long time later, distant memories of young, passionate love spawn emails that lead to international calls reviving an intimate, romantic connection to remind them - and us - that Love Is Never Past Tense....

What listeners say about Love Is Never Past Tense

The books is written from different points of view and with a mixture of time lines. Easy to envision the beauty, character and courageousness of the main character, Janna, she is quite a woman. Serge, on the other hand, needs to grow some. He’s a good guy, he just needs to have more faith in himself. An entertaining book to listen to, with twists and turns, that kept me guessing. I am looking forward to listening to the sequel, to find out what happens next!

An imaginative and authentic love story

This is a timeless and tender story about how much one sacrifices for love. The novel jumps back-and-forth from past to future, allowing the reader to ruminate not only on the characters, but perhaps their own love stories. Additionally, this is a story of what was at stake during the large exodus of people at the fall of the Soviet Union. The strength and courage needed by hopeful migrants looking for new opportunities in a new world resonates today, as there is mass migration from many countries facing war, social instability, and environmental disaster. Yeshanova weaves a heartwarming tale, with an authentic Russian (Soviet) flavor, making for a delightful read.

love is never past tense

This is one of the best audible books I have ever heard. A wonderful true story. The narrator is wonderful! I felt as if I was in the story. Serge and Janna had an enduring love that spanned over 20 years of separation. This book will make you feel.... make you cry... make you rejoice in how their love endured. Lost of historical content of government upheaval in Odessa, full of intrigue, drama, heart wrenching pain, This is a real love story.

The narrator was amazing and I loved the storyline it kept me engaged and I totally finished this is under 24 hours I loved it so much!!!

I read this book a few years ago and was excited to find it on audible so I wanted this book to be the first I listened to. I love listening as the characters move through the different phases of their lives.

it amazes me that this is based on a true story. one has to think how our lives go in so many directions and how amazing when loops in our lives touch each other again. each iteration of our lives enriches us. Janna's story is mesmerizing. I highly recommend this book.

An endearing story of love

This is my first time reading (listening to) something written by Janna Yeshanova. This story is based on true life events and not normally a type of story I would read. It’s hard to “judge” a story when you know someone actually lived what you are seeing before you in the pages of a book.

But, I was intrigued. I love finding new authors and new tales to dive into. This was no different. It was a good read.

The story of love, loss, hardships and fighting for a change not only to better Janna’s life but that of her mother and daughter. The story itself is a lesson in history and how life once was in the USSR. Hard, and at times as dangerous as being locked in a shower with a cobra.

The younger Janna shows us the way of life and how a trip to the Black Sea starts a road to change for her. We learn of how love finds those that stumble upon it. Serge and Janna’s story had me laughing, and worrying right along with them.

No one knows what daily life can bring them, but in this story you see one woman’s journey to not only conquer new lands but to show that love is never past tense.

I read and enjoyed this book a couple years ago. When I learned it had been released as an audiobook, I was eager to hear the result.

My high expectations were more than met. Janna Yeshanova shares a realistic, complex, romantic story that jumps off the pages, but Daniella Acitelli's narration made me feel the story, not just grasp it. A perfect book for WhisperSync.