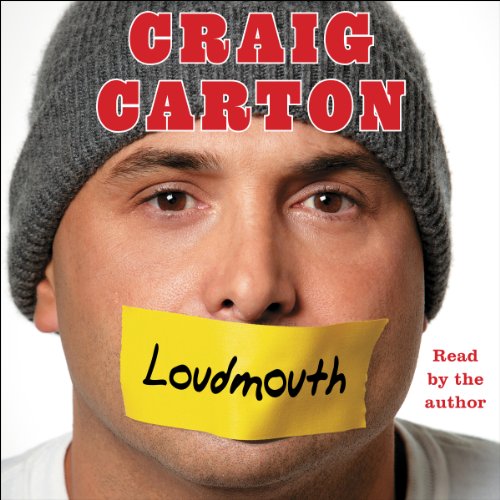 Tales (and Fantasies) of Sports, Sex, and Salvation from Behind the Microphone
By: Craig Carton
Narrated by: Craig Carton
Length: 6 hrs and 17 mins
Categories: Bios & Memoirs, Celebrities
4.5 out of 5 stars 4.5 (24 ratings)

From one of radio's loudest, orneriest, most beloved, and highest-rated sports radio personalities, a bold and hilarious memoir of sports, manhood, and what it is to be a fan.

In 1991, a young Craig Carton drove all of his belongings in a crappy 1980 Buick to Buffalo, New York, to interview for a job at WGR radio. Hired for $12,000 a year, he rented a room in a retirement home where he agreed to help care for his elderly neighbors in exchange for rent of $99 per month. That auspicious start marked the beginning of what is fast becoming a legendary radio career. Often compared to Howard Stern, Carton has hosted a series of highly rated shows, and in 2007 he joined WFAN, where he and Boomer Esiason host an eponymous show every morning for four hours out of a studio in New York City.

In this debut, Carton invites the listener to join him as he recounts tales from his suburban youth, defends his long-held love affair with the New York Jets, reminisces about the shenanigans of some of the highest paid and most celebrated athletes playing today, and reflects on his work as one of radio's craftiest, most hilarious personalities ever to get behind the microphone.

Fun but too much about early life

Would you be willing to try another book from Craig Carton? Why or why not?

yes, love his wit and his funny style. He makes sports fun...oh and he knows his Sh%$

the stories about his early life were too much...other than that great fun read.

I had no expectations about this book, just thought I'd give it a listen because I enjoy the "Boomer and Carton" show. I usually feel that about 2/3 of Craig's opinions are good, the other 1/3 are nonsense and often just made to get attention. Either way, Craig Carton is good at what he does. The book is no literary piece of work, it's just an interesting guy telling his life story. Many these autobiographies are more about money than good literary work, and that is probably be the case here. Some of these spur of the moment autobiographies are quite disappointing, but Craig is a good entertainer and that comes through in the book.

Every morning, almost like clockwork, I turn on my radio (or in my case my radio app) to Boomer & Carton -- the tri-state premier sports radio show on WFAN. Craig Carton had self-promoted this title for quite some time on the show and I was looking forward to getting it as soon as it came to audio. Boy am I glad I picked this one! If you enjoy listening to the silly banter Craig and Boomer spew mornings from 6-10 EST, you'll love listening to the story of Craig Carton and how he rose to the number one morning drive radio show in the country.

Craig's performance is definitely on par with his "radio personality" you may have heard in the past but what I enjoyed most was how authentic his story feels. Craig Carton's rise to stardom was certainly not easy, but through the narration and story you get a sense that this man was destined to succeed.

I highly recommend this for anyone who enjoys biographies, especially from radio personalities that you may not know a lot about. It's not a completely serious book either - Craigy (as he calls himself on the radio) takes jabs at other radio shows, talk show personalities, radio stations, sports teams, and of course himself. If you're looking for an easy listen that doesn't take itself too seriously, I recommend trying out "Loudmouth."