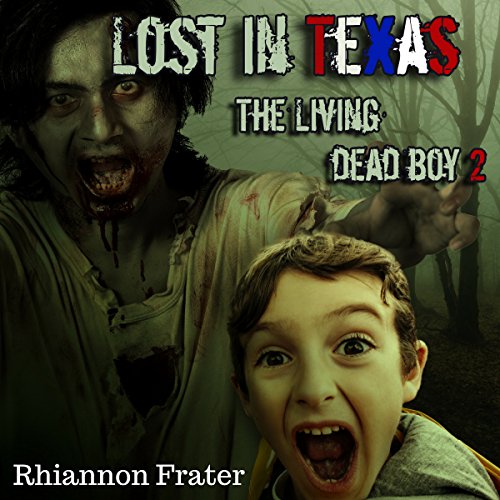 By: Rhiannon Frater
Narrated by: Kasi Hollowell
Try for $0.00

In the zombie apocalypse, no one is safe. Not even children. That’s what twelve-year-old Josh and his friends in the Zombie Hunters Club discovered when the undead invaded their school in The Living Dead Boy. Now, Josh and the remaining Zombie Hunters are stuck on a city bus traveling across zombie-infested Texas. With fires burning on the horizon, mass evacuations underway, zombies roaming the countryside, and in-fighting among the adults on the bus creating tension, Josh has never felt so helpless. Despite his father’s insistence that the adults can handle the situation, Josh knows far too well from watching zombie movies that one person can put everyone else at risk. To his absolute horror, he’s right and he and his friends are running for their lives. Josh may have always considered himself a zombie hunter, but now he’ll have to prove it to escape the ravenous undead and lead his friends to safety.

What listeners say about Lost in Texas

Although this was a good book, the first was better. I think changing the narrator wasn't such a good idea.

The action-packed story continues in Book 2 as our hero, Josh, helps his friends find their way across Texas and one harrowing event after another. Highly recommend this Book/Series!

Zombie Hunters are back !

If you looking for a lot of gore this is not the book for you but if you looking for strong character development and a great overall zombie book to give you some scares I totally recommend this book .

loved it! I am on to book 3. finished this book for n one day, it's that good!

If you've already listened to the first book then you don't need me to tell you what a great story this is. There's a different narrator for this one, but she does a fantastic job.

2nd book as good as the first

Another wonderfully written book. I love Joshs character and his perseverance. The way he keeps his friends out of trouble. More proof that adults don’t always know best

I really enjoyed hearing about Josh's exploits. His character continues to grow as well as his friends. The narrator did a great job as well.

I really enjoyed this book on tape. I do feel like it is more of a preteen than a young adult book though.

loved it changing the narrator in this book really helped it out from the first can't wait to hear what's in store for Josh and Karina in the next book.

I loved the character development of Josh and the other kids. True life depictions of how survival for children could happen and the tribulations they might face were realistic. Their journey has just begun!

Enjoying this trilogy so far, I just love the main characters I just want to take care of them

Really enjoying this series, even though its little kids and I am a big kid! Hope there's plenty more to come.

Good book, the story really starts to grow in this part of the trilogy, buy all 3 of the book so the story makes more sense , would my recommendation

Theres no holding these Zombie Hunters back!

There's no holding these zombie hunters down! Against impossible challenges, Josh fights to lead his group of zombie hunters to safety! Best road trip ever!

Lost in Texas is an excellent followup to the first book; it's well-plotted with great character development. Rhiannon Frater has a wonderful imagination, and her writing is both clear and precise. Kasi Hollowell's performance is much better and suitable for the YA audience.

I was given a free copy of this audiobook at my request and have voluntarily left this review..

I really liked this book. The characters were well thought out and the story was great. I guess every story is gonna have a Sam . The character you want to reach out and hit or throw to the zombies! lol The narrator did a good job but sounded like she was struggling there at the end. Great book, Great story!


From the beginning of this audioboook, itputs you on the edge of your seat and the rest of the book keeps you there. Josh Rondell maybe young but he knows how to handle the undead, in the first book he went from pretending to fight the undead to trying to save his family and friends from the reality of a zombie apocalypse