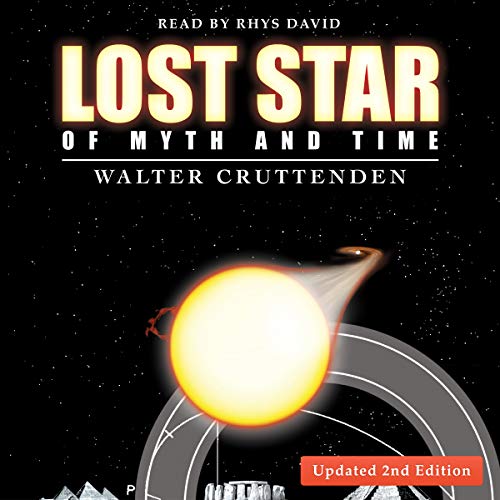 Lost Star of Myth and Time

By: Walter Cruttenden
Narrated by: Rhys David
Try for $0.00

Ancient cultures around the world spoke of a vast cycle of time with alternating dark and golden ages; Plato called it the Great Year. Most of us were taught in school that the dark ages were real but the golden age was just a universal myth. However, new scientific evidence suggest this cycle of high and low ages may have some basis in fact and Caltech is hot on the trail! To better understand the physics behind the concept, we need look no farther than the diurnal and annual motions of the earth. In the first celestial motion, the earth spins on its axis which causes the cycles of night and day, and swinging mankind’s consciousness from “waking” to subconscious states according to the axing and waning light. The earth’s yearly revolution around the Sun has an comparatively larger and profound effect; its swinging electromagnetism creates the seasons, while trillions of plants and animals change form, spawn, hibernate, or migrate in masses.

The astronomical community has discovered that something massive is tugging on our solar system and the stage is set for discovering the motion that moves us through high ages of enlightenment and into lower ages of darkness - a similar darkness that psychology investigates with amnesia patients suffering anxiety from not knowing of their past - a past that we too, have forgotten. Has the whole of mankind unknowlingly suffered a similar dissonance? And If so, perhaps it explains many of our modern problems. Cruttenden explains the cosmic cycle in detail and suggests how a better understanding of the wisdom of ancient cultures is the absolute recipe to a higher civilization.

What listeners say about Lost Star of Myth and Time

Mr. Cruttenden’s writing style is gripping; he presents a story that is as fascinating as it is logical. Weaving subjects of science, mythology and religion, he reveals how ancient cultures possessed knowledge that still baffles the sharpest minds of today.

Lost Star of Myth and Time presents a compelling case – that the rise and fall of civilizations (as well as of human consciousness) follow a cycle of time that can be linked with the precession of the equinox. The hypotheses presented in Cruttenden’s work are not just persuasive, but plausible.

This is not a book to casually listen to from beginning to end; by taking time to visualize the concepts presented, such as the “binary star theory”, or how several of the world's monolithic structure have deeper significance than commonly known, I received more than my money's worth in enlightenment.

I would highly recommend Lost Star to anyone who wants to explore the mysteries that enshroud history, or to anyone who has a desire to shed light on the potentials of humanity in the centuries to come.

Profoundly important, and an enjoyable listen !

Walter Cruttenden's Lost Star of Myth and Time explores the profoundly important subject of the precession of the equinoxes, which is encoded in ancient myth from Egypt to Scandinavia to China, and which is encoded into the dimensions and relative locations of ancient megalithic monuments and pyramids. Not satisfied with simply accepting the conventional theory for the cause of precession on the authority of "the consensus," Walter dares to question whether or not there could be another explanation for the evidence that we have found thus far. A groundbreaking book and one that everyone interested in the question of humanity's ancient history (and earth's ancient history) should own and absorb. Hearing the words of the book read aloud brings a new perspective and impresses the details of this fascinating subject in an entirely different and memorable way -- highly recommended!

Modern science and ancient wisdom converge to paint a picture of how our solar system motion influences the rise and fall of civilization. It’s about time and space and lost cultures. It offers a compelling argument for anomalous artifacts, planet nine and the arc of history, and sheds a natural light on the future evolution of mankind.

Fascinating book, full of key information regarding procession cycles. It covers ancient history, myths, sites and artifacts to back up the hypothesis of higher cultures of mind and soul in the past.

this book has the potential to change your outlook on the universe and life itself if you let it resonate with you personally and spiritually.

Lines up well with new discoveries that push the calendar back to a sophisticated high civilization during the last ice age, that was likely ancient even then. Also fits with new models of our velocity and motion through space. Old and new sciences meet often these days, and tell a convincing tale in many texts, among which this has earned it’s place. Very compelling.

Way too heady and not interesting enough to follow

The first two or three chapters were very intriguing and gave me the sense that this was a real gem of a book. However, it didn't take too long before it got bogged done in scientific (or maybe pseudo-scientific?) details that for me are simply too complex and etherial to follow. I stuck with it through about half of the book hoping that it would be a bit more grounded in common day English and return to the promise that the first few chapters held out. But no such luck.

If the other reviewers are not simply followers of Sri Yukteshwar or have written glowing reviews to support the book and the author, then my experience of this book is not the norm. But for me it's a big disappointment.

Healing if you think history is His Story

Wonderfully sensible take on reality and how the truth just might be far stranger than one can imagine. Except, here you can.

The narration is top drawer, and the overall essence of this very detailed content was very well put together. 5 stars.