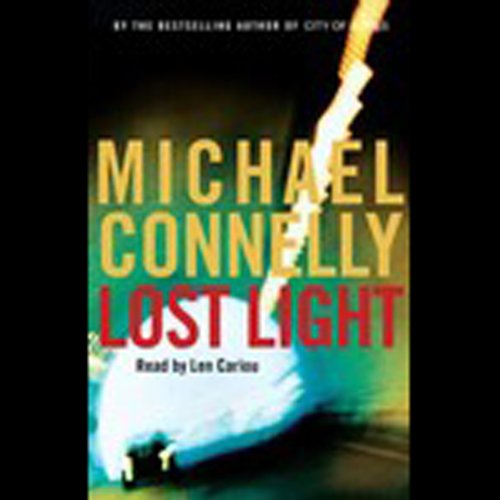 By: Michael Connelly
Narrated by: Len Cariou
Try for $0.00

Only the money was real. Four years ago, LAPD detective Harry Bosch was on a movie set, asking questions about the murder of a young production assistant, when an armored car arrived with $2 million cash for use in a heist scene. In a life-imitates-art firestorm, a gang of masked men converged on the delivery and robbed the armored car with guns blazing. Bosch got off a shot that struck one of the robbers as their van sped away, but the money was never recovered. And the young woman's murder was in the stack of unsolved-case files Bosch carried home the night he left the LAPD.

Now Bosch moves full-bore back into that case, determined to find justice for the young woman. Without a badge to open doors and strike fear in the guilty, he learns afresh how brutally indifferent the world can be. But something draws him on, past humiliation and harassment. It's not just that the dead woman had no discernible link to the robbery. Nor is it his sympathy for the cops who took the case over, one of them killed on duty and the other paralyzed by a bullet in the same attack. With every conversation and every thread of evidence, Bosch senses a larger presence, an organization bigger than the movie studios and more ruthless than even the LAPD. The part of Bosch that will never back down finds as fatal an opponent as he's ever encountered - and there's no guarantee that Bosch will survive the showdown ahead.

"It's never pretty watching Harry [Bosch] edge toward connection with those he loves and then back away...but it just may be the most compelling train wreck in crime fiction." (Booklist, Starred Review)
"This exciting procedural is as good as any in the series." (Publishers Weekly)

What listeners say about Lost Light

I've read other Harry Bosch mysteries by Michael Connelly and always walked away with an unsatisfied feeling. This time he did it right! For those of you old enough to remember some of the detective novels of the fifties this one encompasses some of the best features of that genre. Don't get me wrong, the story is as up to date and timely as it gets. Al Qaeda operatives and 9/11 are never far from our minds. This novel however takes more twists and turns than a roller coaster. Bosch is a human being, capable of errors and hesitations, but always focused on his main objective, solving the murder. The plot keeps you in constant suspense, almost wanting to keep you glued to your listening device until the end. Len Cariou's reading is superb and compliments a fine mystery novel. I know that you'll like it.

Don't Know How Connelly Does It

I started the Bosch series in the middle having picked out A Darkness More Than night primarily because it was sequel with Terry McCaleb.

I've gone in sequence since --I just finished THE NARROWS (another gem). Audible doesn't have the earlier ones but I bust bought cassettes and am listening to BLACK ECHO (the first Bosch) and I am totally amazed at the series.

There is certainly a formula: Harry starts on a case and is totally alone - no one believes that he's correct and he has to fight tooth and nail to get anybody's cooperation - badge or not. He's always proven right in the end but no one thanks him -- they're still angry at him for doing things 'his way'.

Formula aside, the characterization of Bosch is just so darned fascinating. Some might say it's been done before - the misunderstood, dark, brooding Vietnam vet fighting for a just casue - and they are right. It HAS been done before -- but never as well.

Harry is a real person in so many ways - and following him through the series is as interesting as the mysteries. The series spans 10 years so far. In the first book he's around 40 and by now he's around 50 and so many changes have happenned in those 10 years it's really like watching an acquaintance (I don't think Harry has too many real friends) as he hits middle age and beyond.

I understand Connelly is in the middle of yet ANOTHER Bosch story and I can't wait for it.

Tony Award winner Len Cariou does a GREAT job of reading. Some folks have said his voicing of Lawton Cross is grating - well it's supposed to be - if you've ever met anybody in that condition his interpretation is pretty dead on. it's not pleasant to listen to but it's realistic.

This is a must read. If you haven't read ANY Bosch books yet - start at the beginning. They are all stand alone but they're much richer if you follow the saga.

Very good! I read all books by Michael Connelly and this one hit the mark. There are many twists that keep you interested and the narrator did a great job. I could see Harry Bosch and feel his emotions. This book wasn't quite as good as City of Bones but it was very enjoyable

Having listened to (or read) almost every Michael Connelly novel, I think this is the best of the best! The plot is WOW. Great characters and an amazing narration. You cannot go wrong with this book.

Another Bosch novel that doesn't disappoint. If you're looking for a "can't miss" this certainly fits the mold. Excellent narration too. I can't believe Hollywood hasn't moved on Bosch. Bruce Willis would be excellent for this role.

One of the best in the series

An engaging novel with an earth-shattering conclusion that will not disappoint. Lost Light is the Harry Bosch series at its best. No loose ends and a quilt work of plots that all come together quite nicely. The major characters are well developed and the narration is superb. If you like Connelly and Bosch, you will not be disappointed.

I love a book with a good ending and this book left me feeling very satisfied. The ending was surprising, but followed logically. It took me a little while to get pulled into the story, but 25% through I was hooked! The narrator is perfect for this genre. I will listen to all the books he reads (there are only a few). I suggest you listen to this book prior to The Narrows, another gem by Connelly, so that you get the full impact of one of the story lines. I highly recommend this book to all you murder-mystery fans!

They should all be this good...

The mystery genre is not one I've been a huge fan of - too much in the way of formulaic plots and thin, cartoon-ish characters that don't ring true. Here, Michael Connelly - with considerable aid from the narrator - has created in"Lost Light" (and "The Closers") a truly engaging tale, with more than sufficient surprises as the tale unfolds.

The stories are fresh, with plenty of references to contemporary events that server to make it all more real than we might wish. The characters have good depth and are painted in a way that brings them to life.

I can only hope to find more books of this quality. Whether you are a fan of the genre or new to it, I daresay you will enjoy this.

Of course that means it is a good listen and yes, highly recommended!

There are a few different twists in this one, so I would probably rank it near the top end of Bosch novels.

Great Listen for the first intro to Harry Bosch

My criteria for a good audible book is whether it will keep me in the car after I reach my destination just so I can listen to more of the story. This book definitely does it. I have never read or listened to a Michel Connelly novel before and I have to say that his writing style is very good. The story is a bit dry at the start and at times gives a bit more extraneous description information than is really needed; however, the narration is excellent.

Contemporary theme for an old-fashioned detective novel. These Harry Bosch novels are a great series. The narrator's voice really suits the main protagonist, but also does a great job with the other characters too. Creates a wonderful movie in your mind. I recommended this to a friend and he also rated it highly, so download with confidence!

Would you listen to Lost Light: Harry Bosch Series, Book 9 again? Why?

Probably not; don't usually with this genre.......

Which character – as performed by Len Cariou – was your favourite?

No chance! - that will have to wait for that Caribbean holiday........

Some very dark and genuinely horrifying moments in this, so much so that I wondered if the author added the redemptive feel-good ending by way of mitigation.

I cannot get enough of this author or this series. I have listened to 3 of his books in little more than a week and given them all 5 stars. Each of the three was read by a different narrator and while all were excellent, that sort of change can get in the way for me when I have grown to love a character as they are portrayed by a particular reader. It is a testament to the books and the character of Harry Bosch himself that after only a few minutes of readjustment I was once again immersed in the intricate and fascinating plot of each story.

Audible - PLEASE fill in the gaps you have in your unabridged library of the Harry Bosch series and thanks for the annual membership option - I was an immediate sign-up and am about to go and buy the next one.

My first Michael Connelly but will not be the last

Where does Lost Light: Harry Bosch Series, Book 9 rank among all the audiobooks you’ve listened to so far?

Top 10. I have listened to many audiobooks over the years. I love thrillers as well as other genres especially historical novels. In the thriller / mystery genre, this one is excellent.

I felt that the main characters could be real. The scenarios were plausible and the detail that the author writes adds interest to the story.

Which character – as performed by Len Cariou – was your favourite?

I can't remember his name but the former colleague of Harry who was badly laid up due to injury.