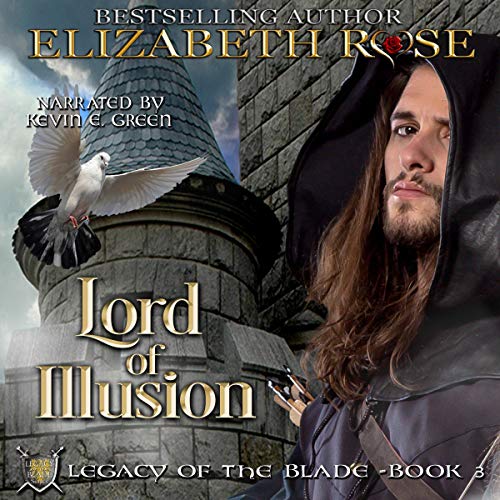 By: Elizabeth Rose
Narrated by: Kevin E. Green
Try for $0.00

Book 3: Lady Abigail of Blackmore is being sent by her father to marry the vile Lord Shrewsbury in return for the release of her brother. When a thief robs them on the road, she sees him as her opportunity to run from a life that no longer suits her.

Madoc ap Powell has been raised as a peasant, knowing nothing about his true heritage. In order to survive, he has lived his life as a thief. He is known for his disguises, and being a master of illusion is his best skill. But when the Lady Abigail hunts him down to retrieve her stolen dagger, he finds that he is not the only one looking to escape a life of doom.

And when she begs him to let her travel with him, she is very disappointed to find out that he is heading for Shrewsbury, the last place she wants to go. Madoc knows if caught helping her, he will once again end up in a dungeon, but something about her calls to him just as much as he makes her feel alive for the first time in her life.

Two people, both looking to find the answers of their past, are drawn to each other. But it is bound to end badly when they are from two opposite realms of life. A lady on the run and a thief need to escape from themselves before they are prisoners to the attraction they feel toward one another in Lord of Illusion.

What listeners say about Lord of Illusion

Elizabeth has a real gift in spinning tales. This one is no exception! Twins stolen and the male taken by a woman and she raised him up in a very different environment than his birthright. He was a master of dressing so no one recognizes him. An adventure starts when he meets and falls in love with a noblewoman.

This is the third book in this series! Loved them all. In fact I Am getting ready to read another in this series, then I am going to read the rest of her other books. Love historical novels and Elizabeth Rose is great!!!

Elizabeth Rose has written another great story in the Legacy of the Blade series. Lots of action, romance and just the right amount of sly laughs to keep me listening. Kevin E. Green does a wonderful narration of the story which makes it even better.

I enjoyed listening to Maddoc's story. There was a lot of action and romance. There were a few twists that I didn't expect. The narrator does a good job.

This is a book 3 of a series. I highly recommend you read these in order or you will learn things that you shouldn’t know if not in order. This was a good book about a hero who wasn’t raised to be a hero, a hero wanting to find his place and trying to be better than he thought he could ever be. While the heroine was running away to try and find her place and something more than she knew. Together they find what they didn’t know they needed or thought they deserved. I recommend this book, only one scene of slight steam. There is minor violence and can be a trigger for some. The narrator is engaging and did a good job of trying to distinguish each character in the story with his voice.

Elizabeth Rose what a fantastic series!!

This is book 3 of the Legacy of the Blade. Hold on to
your seat while you see the Master of Illusion,
mystery of kidnapped twins, deceit and the
evil Lord Shrewsbury. Lady Abigail's Brother
is in the dungeon of Lord Shrewsbury. Her
Father trades Abby in marriage for the release
of her Brother. Abby meets Madoc ap Powell
while on the way to Shrewsbury. This
story will solve part of the kidnapping
of the twins.

It took me a while to finish this one, since I listened to it via Audible, which I only listen to during my commute, and I'm not currently commuting often. As such, all the details didn't stick with me through the end, but it was pretty good. Only one more sibling left to find.

Another great story by author Elizabeth Rose.
This story immediately captured my attention and I couldn’t stop listening to it. It has mystery, intrigue, conflict & passion. A perfect recipe for a great romance story. Very well done & a must have.

Adding to the family

I knew Madoc figured in! Another thread has been pulled into the tapestry of the Blake family, and the craftiness of Madoc is insane. The characters were well written, as some I loved (& felt heartache for) and some needed to be slapped! Lady Abigail got the man that she loved, but I am definitely not her fan- maybe because I am a woman, but she drove me nuts with her selfishness and lack of general common sense. I'm looking forward to the search for the last sibling! As always, please use headphones for the bedroom scenes when children are present 😉

Believe it or not

This series gets better with each book. Great narration. Lady Abigail does not want to marry the Lord of Shrewsbury,but her Father is forcing her in exchange for her brother. On the way there, her caravan is robbed and she sees the opportunity to escape her guard. Little does she know the thief, Madoc who got her dagger, is heading to Shrewsbury. What luck. She follows him anyway, because she wants her dagger back. Madoc has a bad feeling about this and does not want to end up back in prison, he just needs to get back to his sick mother. Their troubles are only beginning and it gets worse before it gets better. Good story and strong characters.

I couldn't put this book down and it was so good. This book was a page turner and I love the characters and side characters in this story because it makes all come together. I love all the disguises Madoc comes up with. I feel for Madoc when he is trying to make a situation better sometimes he makes a mess of it like when he set the fire 🙈 Madoc and Abbey were so good for each other and that is what made the story for me.

Madoc- uses illusions/disguises to thieve and escape.
Abigail/Abbie- is to mary the malicious Lord Shrewsbury to free her brother from prison.
I enjoyed reading this captivating action packed, entertaining story with some twist that is fantastically written. Madocs relationship with his birds added another dimension to his character. Their story has a unique and wonderful HEA.

Loved every second of this story. This series gets better and better. I think this was my favourite so far, though I loved them all. Kevin Green is s brilliant narrator and makes thre stories even better with the different voices for every character. Definitely worth a credit. Now on to the last one of the series.

This has been a wonderful treat. It was narrated excellently. This is book three of the series The Legacy of the Blade There is a prequel which has the story of the series. Book 1 is the Lord of the Blade book 2 is Lady Renegade. Book 3. Is Lord of Illusion , book 4 which I will be listening to next, and is called Lady of the Mist.i have enjoyed every word up to now and am looking forward to listening to Lady of the Mist. This will complete the series. The. Main Character is Madoc who was just born and was stolen with his twin sister. Madoc’s story is exciting, thieving, romance, caring, love, and. Protection, illusion and pigeons. Thank You Miss Rose for creating This series. It is lovely.